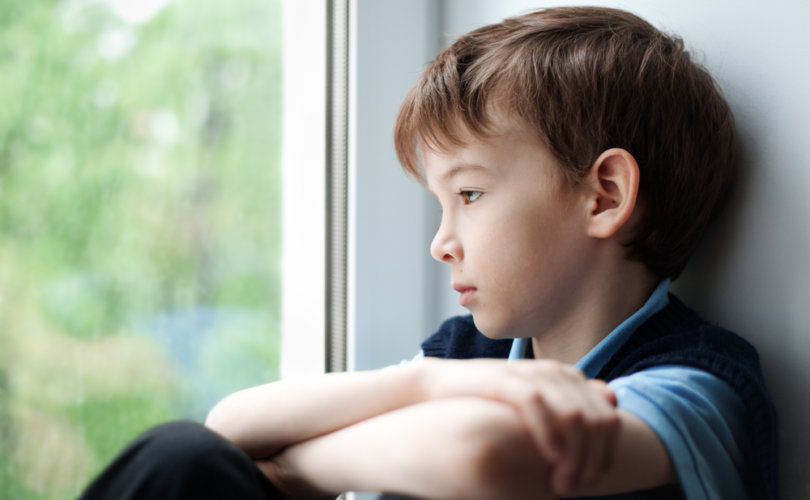 October 20, 2016 (Campaign Life Coalition) — It ought to be every child’s natural birthright to know who Mom and Dad are.  When children don’t know one, or both, of their parents, they grieve.  No legislation should provoke such a loss.  The natural family precedes society and human government, and tampering with it invariably strikes against human rights.  Engineering families is a characteristic of totalitarian regimes, as we witness in the one-child policy of Communist China.

The very thought of seeking to outdo nature in social justice also seems, forgive me, so unnatural.

When the balance of nature is disrupted by reckless economic policy, we are acutely aware of the environmental trauma.  So why are Mom and Dad suddenly dispensable in the government’s new definition of the family?

Children are impossible to conceive without a man’s sperm and a woman’s egg.  But why does Bill 28 conceive that the moment of fertilization concludes a father and mother’s necessary role in the family?  When we consider how long children take to mature, it is illogical to suggest that they can flourish without the ever-present diversity that the natural family provides.

It runs against the whole counsel of human wisdom.  From time immemorial, every culture and civilization has regarded a husband and wife as the nucleus of a family.  Irrespective of religious conviction, the nuclear family is the acknowledged building block of society.  Those who would improve upon this social reality must accept that the entire burden of proof lies on them.

The authors of Bill 28 have offered no such proof.  What this Bill understandably seeks to address are problems in the Adoption Act, including those created by biotechnology that have run ahead of the field of ethics.  Ignoring the nature of the family doesn’t seem a wise solution.

The justification given is that non-natural parents face unnecessary barriers when acquiring children that add to the already expensive business of parenting.  But it takes a clear cut to these barriers:  the concept of mother and father are treated as if they were little other than a transactional tariff removed for the sake of efficiency.  It is as if it were of no substance that the first intimate social bond of every Canadian were being erased at the stroke of a pen.

Ontario's Bill 28 is an omnibus bill that amends the Vital Statistics Act, the Children’s Law Reform Act and other bills, including mandating the generic term ’parent’ in place of ’mother’ or ’father.’  More surprising is its apparent misogyny.  While fathers enjoy repeated reference, mothers aren’t even mentioned when a child passes down their birth canals. (Cf. Sec. 16.1&3)

Worst of all, it commodifies children rather than seeking their true welfare.  People, after all, are not things, and children are the most vulnerable of people.  Children deserve nature’s best wherever possible, and any political legislation worthy of support ought to seek to strengthen that natural good for the benefit of the child and society as a whole, not to weaken it.

In the family, a father and mother are not just two replaceable parts, they are ontologically distinct persons whose complementary differences coalesce to bring a child to flourish.  It is not just the consensus of human history but of social scientists today.  The research by scholars such as Sara McLanahan and Isabel Sawhill at the Brookings Institution concludes that children raised by their own married, biological parents fare better than every alternative on a whole host of outcomes, including high school graduation rates, delayed sexual initiation, lower rates of drug use, etc..

Bill 28 also ignores that the widely acknowledged problems children of single-parent families experience may well be qualitative not quantitative.  It is not that they only have one parent, but only one of the two sexes in the home.  Family courts now rarely award single parent custody in the event of divorce for that reason.

Same-sex marriages are still relatively new, but there is every reason to suspect that the very same problem of lacking a male AND a female parent in the family might affect children of families that seek to chart an alternative path to the natural family.  Having four parents, as this Bill allows, offers no reason for greater stability other than for the legal profession who will have more litigants.

For all these reasons, I would encourage the Ontario legislature to do further research into the substantial matters of Bill 28 before proceeding to enact sweeping legislation that will entirely alter family law in Ontario.  It is, after all, our birthright.

Readers who are concerned about the Liberal government's war on motherhood, and the establishment of 4-parent institutions for children, should express concerns to their local MPP and to the Leader of the Opposition:

1.  Look up your local MPP using your postal code by pressing here, and then click on the <Contact tab> to find their email address.