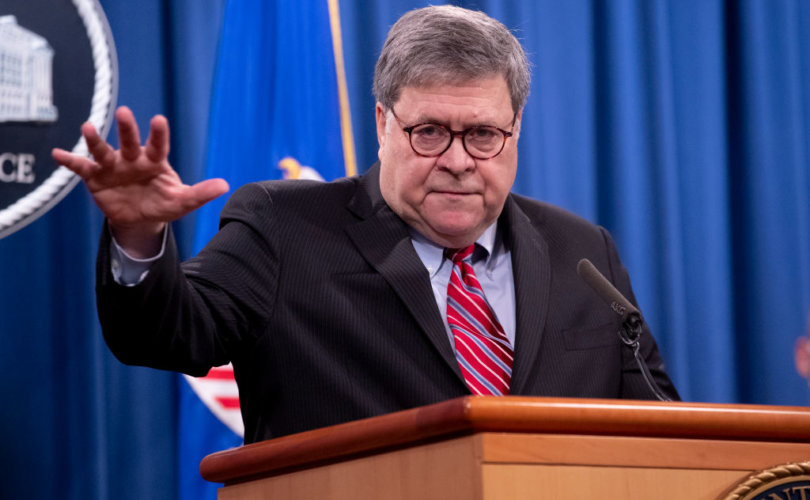 (American Thinker) – Former Attorney General William Barr during an interview on Fox News last week said that if Donald Trump did indeed have a standing order to declassify all documents that he took with him as he left the White House, that would amount to a worse abuse than actually taking the documents.

I can’t think of a legitimate reason why they should have been could be taken out of the government, away from the government if they’re classified. I frankly am skeptical of this claim that ‘I declassified everything,’ you know. If, in fact, he sort of stood over scores of boxes, not really knowing what was in them, and said, “I hereby declassify everything in here” – that would be such an abuse, and that shows such recklessness that it’s almost worse than taking the documents.

Bill Barr: “If in fact [Trump] sort of stood over scores of boxes, not really knowing what was in them and said ‘I hereby declassify everything in here,’ that would be such an abuse and that shows such recklessness it’s almost worse than taking the documents.” pic.twitter.com/7PsNeaV2J7

U.S. district judge Aileen M. Cannon, from the Southern District of Florida, ordered that an independent third party be appointed to “review the seized property, manage assertions of privilege and make recommendations thereon, evaluate claims for the return of property,” and “enjoin[ed] the Government from reviewing and using the seized materials for investigative purposes.”

Barr called the order to appoint a special master a “deeply flawed” decision.

The whole idea of a special master is a bit of a red herring. The only documents that have been taken, it seems to me, that there’s a legitimate concern about keeping away from the government and insulating the government from, would be documents relating to his private lawyer communications, him as an individual and as outside lawyers.

Former Trump Attorney General Bill Barr says it was “wrong” for judge to grant a special master in the FBI investigation of Trump:

“I don’t think the appointment of a special master is gonna hold up, but even if it does, I don’t see it fundamentally changing the trajectory.” pic.twitter.com/s63HQJ6PIt

For the media, this is the gold they dream of: a former Trump cabinet member attacking him. They carried on with glee.

So what are the facts?

Since most of the warrant, the supporting affidavits, and even the cause for redaction were redacted, the key facts are unclear. Barr was, in other words, engaging in uneducated speculation.

The basic facts we know are the following:

The raid on Trump’s house was unprecedented.

If Trump indeed was in possession of documents of such vital national importance, why did the authorities not initiate proceedings to retrieve these documents immediately after Trump departed the White House?

Why did they wait for three months before the midterms to raid Trump’s private home?

The New York Post reported that Trump’s team was “cooperating fully” with federal authorities to arrange the return of the documents, with the process beginning in May 2021, when it was noticed that some records were missing, and in January 2022, some of the documents were returned.

Then, in June 2022, four top DOJ officials traveled to Mar-a-Lago to speak with Trump’s attorneys about the documents. Trump’s team showed the government officials where Trump was storing documents – in a basement room.

Why did they not initiate proceedings to retrieve those documents at that time?

Serious questions need to be asked about the raid itself.

Why were Trump’s lawyers not allowed to see or obtain a copy of the search warrant and thoroughly review it?

Why were Trump’s lawyers prevented from accompanying FBI officials during the raid?

Why did the 30 agents at Mar-a-Lago ask staff to turn security cameras off?

Now about the redactions.

If the reasons for the raid were fair, why did the FBI redact most of the warrant and the supporting affidavits?

The FBI claimed that the redaction was to protect the identities of the officials involved. If safety was the concern, why was the name of former Trump official Kash Patel also not redacted?

Why did a disgraced former FBI official issue a veiled threat against Patel?

Never great to see your unredacted name in a search warrant affidavit.

To borrow from Eric Hirschman, “I’m going to give you the best free legal advice you’re ever getting in your life. Get a great F’ing criminal defense lawyer – you’re going to need it.” pic.twitter.com/n9jU44E2nW

Regarding the appointment of a special master, there is no harm in allowing an independent third party to review the seized property.

Barr took over from Attorney General Jeff Sessions and appeared to stand against the swamp. He appeared to steer the Mueller investigation toward completion and even prepared a summary of the Mueller report that cleared Trump. The Democrats, looking to force Trump out of office, called the summary a misrepresentation while Barr himself was called Trump’s lackey.

But beyond this, what concrete actions were taken by Barr’s DOJ?

Andrew McCabe confessed to leaking information to the media and lied about it to the FBI. Sessions had fired him for these felonies, but Barr didn’t charge him.

During the Mueller probe, the investigators frequently leaked to the press to build the narrative that the walls were closing in on Trump. They also used pressure and intimidation tactics to extract confessions. They also baselessly conducted midnight raids and leaked to the media about it in advance. Barr did nothing to ensure that the rogue elements face the consequences of their actions.

In May 2019, Barr assigned federal prosecutor John Durham to investigate the origins of the FBI’s 2016 investigation into the Trump-Russia collusion hoax.

Nothing much has come out of that.

Trump blasts Bill Barr and begs for Durham to do something pic.twitter.com/HsETNRM91T

Back in October 2020, The New York Post had carried myriad reports on the shady business dealings of Hunter Biden, enabled by his father, Joe Biden. Another report revealed that Hunter Biden’s laptop contained emails, text messages, and financial documents that proved that Biden, as vice president, used his influence to reap large profits for his family.

Following the reports, personnel from MSNBC, NBC, The Washington Post, The Daily Beast, CNN, and the New York Times made efforts to discredit the story.

Fifty-one former senior intelligence officials have signed on to a letter claiming that the report looked like “Russian disinformation.”

Once again, Barr did nothing.

There were serious concerns with the 2020 election. The corporate media and Big Tech suppressed the Hunter Biden scandal. The sacrosanct electoral infrastructure of the 2020 elections was infiltrated by Democrat activists. The Democrats facilitated large-scale mail-in voting with ballots cast long before Election Day in 2020. Mail-in votes are vulnerable to fraud.

Barr should have appointed a special prosecutor to probe the elections, but once again, he did nothing.

Barr allowed the continuation of the two-tier justice system, one for the Washington Democrat establishment and another for the rest. This led some to wonder if Barr was dispatched by the swamp to deceive Trump and his supporters into thinking he stood with them.

Barr certainly said the right things on many occasions; however, his words weren’t followed by actions. Did he chicken out, fearing repercussions from the swamp, or was he threatened, or was it his mission to protect the swamp?

We will never know.

Barr became an ineffective ally, which is often worse than being a sworn enemy. The enemy is doing what is expected by acting against you. But real betrayal occurs when an ally turns into a bystander. Nobody expected Barr to be partisan; he just had to do his job.