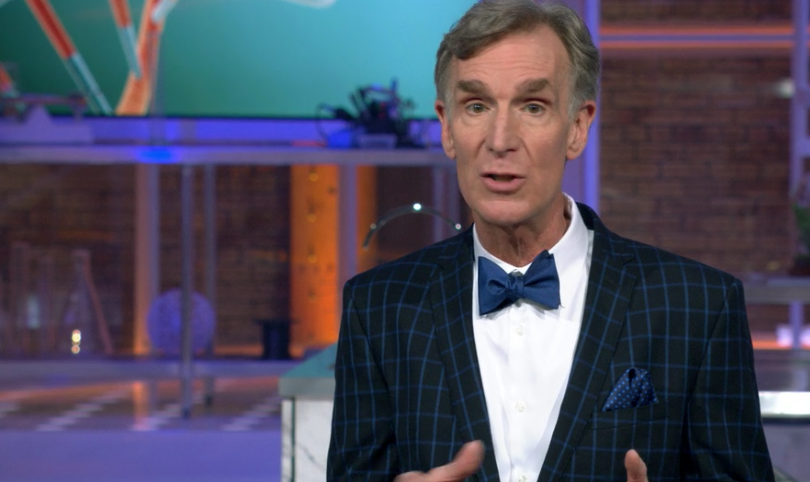 May 3, 2017 (LiveActionNews) — In his new Netflix program, “Bill Nye Saves the World,” Bill Nye (known to many as “The Science Guy” – though some have noted that his credentials are actually in mechanical engineering) goes from talking about how families can create “designer babies” to lamenting how there are too many people on Earth in the span of a single episode.

The last episode of the season, “Earth’s People Problem,” has Nye illustrating the planet’s population with sponge people on a conveyor belt and a kiddie pool.

Despite lamenting Earth’s supposed overpopulation, early in the episode, Nye inadvertently explains how this is actually a myth. “We can produce enough food for everybody, but we’re not good at distributing it,” Nye explains. So…the problem isn’t overpopulation.

Nye also admits that there are not enough younger people to provide for the older generations – which should be a hint that abortion and things like coercive population control are not beneficial for societies. But apparently Nye missed that glaring neon sign.

Nye discusses “women’s rights” and “contraception,” including a “women can do anything” speech – anything, that is, if they stop having those darn kids! (I guess choosing to be a mom doesn’t count as empowerment?) Nye quickly devolves into a rant about population control:

And by the way, when women are empowered, wherever they are, in the United States, in North America, in the developed world, in the developing world, in remote places, in congested places, when women are empowered. When women get education, they have fewer kids. And the kids they have have a higher quality of life because they have more resources to distribute for the fewer kids. It’s not rocket surgery, it’s science!

Correspondent Emily Calandrelli, speaking from India (one of the most populated countries in the world), says, “Social scientists believe there is a direct link between overpopulation and a lack of education and employment for women.” In India, less than 25 percent of women have jobs, and society has gender-based rules.

The segment is inspiring, as it profiles Infosys and one of the young women it employs, named Preeti. Unfortunately, there is a plug for population control here, too. “Being educated, it means people are family planning,” shares Preeti. “And it’s really good because they can think about overpopulation and the problem that it causes to the earth. So I think being educated is a really good solution.”

Education for women and girls is extremely important, but when this episode discusses ‘education,’ it’s not talking about reading, writing, and arithmetic, or even job skills. It’s talking about educating women on “things like contraceptive methods,” according to Calandrelli. When women have careers, she says with a laugh, “they often just start having a family later on in life. And because of things like biology, they typically have fewer kids.”

When discussing India’s growing population with Nye, Calandrelli makes a disapproving face while noting how people in the country know that the large population is “a stigma about India and they don’t like it.” No mention is made of the anti-girl bias in India, which leads to gendercide. How, exactly, does that empower women or the baby girls who aren’t even allowed to grow up and become women?

Instead, Calandrelli happily shares how Infosys “investing in women” has the “unintended side effect of having women have fewer children.”

Nye also speaks to his panel on this “complicated issue.” The education point is furthered by Nerys Benfield, physician and director of family planning (read: abortionist) at Montefiore Medical Center. She promotes and emphasizes family planning with jokes about how much sex women are having. “I think contraception is the tool by which all of these things can get actualized,” Benfield shares.

Benfield joyfully promotes contraception as an inexpensive and “cost-effective interventions that we have for health care.” But is birth control really “health care”? Some question this conventional wisdom.

These points are nauseating enough, but they are overshadowed by Nye’s horrifying and totalitarian suggestion that we should have “policies that penalize people for having extra kids in the developed world.”

Travis Rieder, a Berman Institute of Bioethics ethicist at Johns Hopkins University, adds with a straight face “that we should at least consider” such an option. So as to use “the least policy-ish” approach, he suggests that we “encourage our culture and our norms to change.”

To her credit, Rachel Snow, chief of the population and development branch of the United Nations Population Fund (UNFPA), says she “would take issue to do anything to incentivize fewer children or more children.” When the pro-abortion UNFPA makes the reasonable and sane point, you know that something is very, very wrong. “Some families have five or six children. God bless them. I mean, that’s fine.” She adds that she feels that worrying about the Earth’s population is unnecessary.

Benfield jumps in to remind Nye that when the United States engaged in a similar program, through legal and forced sterilization, it was poor, minority, and disabled women who were harmed.

In case Nye is unaware, China is one country we can observe to see just how well penalizing families for having “extra kids” works. China chooses to penalize women with late-term forced abortions, creating an almost unimaginable loss of girls and engaging one of the worst human rights crises in the process.

Abortion advocates like Planned Parenthood and Nye equate women’s empowerment and success with fewer children, as if women couldn’t achieve anything with their fertility intact. How very anti-feminist of them.