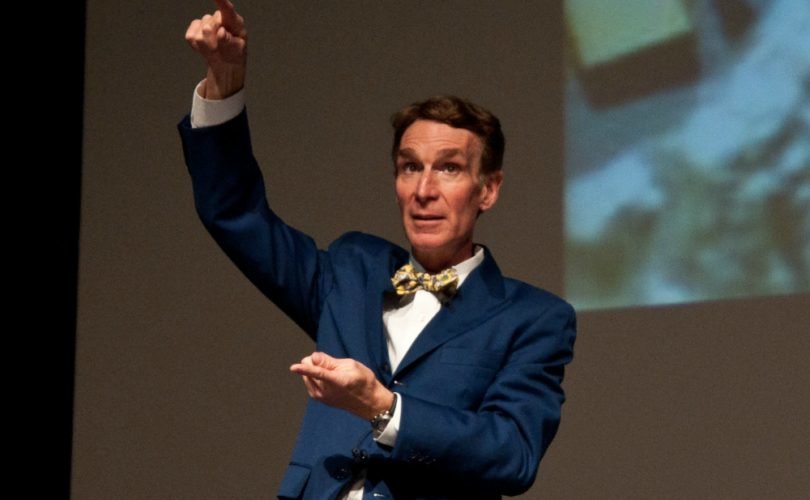 September 28, 2015 (Just Facts) — In a new viral video starring Bill Nye, the famed “Science Guy” declares that laws protecting “unborn people” are “based on ignorance” and reflect a “a deep scientific lack of understanding.” He also says that if you support such laws, you “literally or apparently literally don't know what you’re talking about.”

Nye's video was released during an ongoing battle in Congress over sending taxpayers' money to Planned Parenthood, the nation's largest abortion provider. Several large media outlets have glowingly covered the video, including the Washington Post, Newsweek, and the Huffington Post.

Nye's central argument is that human embryos should not be protected by law, because many of them perish from natural causes before they implant in the womb. Based on this, he claims that if you think life begins at fertilization and is worthy of protection:

Moreover, Nye's logic and his use of the phrase “didn't become a human” assume that life does not begin at fertilization, a notion that is contrary to science. The science of biology has revealed that there are four empirical attributes of life (growth, reproduction, metabolism, and response to stimuli), and the science of embryology has shown that all of these are present at fertilization.

Furthermore, the sciences of genetics and embryology have proven that the genetic composition of humans is formed during fertilization, and as the textbook Molecular Biology explains, this genetic material is “the very basis of life itself.”

In accord with these facts, the medical textbook Before We Are Born: Essentials of Embryology and Birth Defects states: “The zygote and early embryo are living human organisms.” And an organism, in the words of Webster's College Dictionary, is “any individual life form considered as an entity.”

Nye also states that opposition to abortion is based on an “interpretation of a book written 5,000 years ago” that makes people “think that when a man and a woman have sexual intercourse they always have a baby.”

That statement is manifestly false. The Bible says no such thing, and everyone who has ever had repeated sex without birth control knows that a baby does not always result. Furthermore, miscarriages (technically called “spontaneous abortions”) are often visibly obvious to those who have suffered them. These are not modern revelations of science but realities that have been obvious since the dawn of mankind.

Contrary to Nye's straw man, Biblically-based opposition to abortion is not rooted in unscientific fallacies but in principles about the value and uniqueness of each individual from the moment of conception. Incidentally, these principles are consistent with science. Beyond the scientific facts that show life begins at fertilization, modern science has also revealed that each human embryo is biologically unique and irreplaceable.

Genetically speaking, with the exception of identical twins, once a woman conceives an embryo, the odds against her conceiving the same one again are greater than 10600 to one. For a point of comparison, there are roughly 1080 atoms in the known universe.

Even among identical twins (who have the same DNA), the burgeoning science of epigenetics has shown they still have biological differences that make each of them incredibly distinctive.

In sum, Bill Nye, a supposed champion of modern science, is patently wrong about this issue. In striking contrast, the Bible, a book that Nye scoffs at based on its age, is perfectly consistent with the scientific facts of this matter (and many others).

James D. Agresti is the president of Just Facts, a nonprofit institute dedicated to researching publishing verifiable facts about public policy. This article is reprinted with permission.