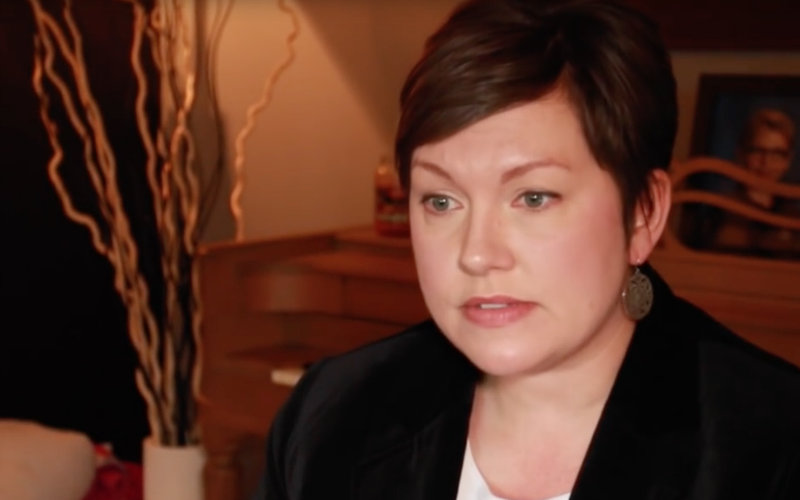 I hope you will join me in refuting gender ideology wherever you see it, but most especially in schools where it strikes at the very heart of what it means to educate.Youtube

April 21, 2017 (ThePublicDiscourse) — As a mother of seven, I have no doubts about my conviction that biological sex is a fundamental reality; giving birth many times over has made an incredibly persuasive argument in that regard. Though I’ve been blessed with a large community of Catholic and Christian friends who share my views, in secular circles more and more people have come to see embodied sex as merely a social construct. So you can imagine my surprise when I found that I had allies in the feminist and lesbian community. Though we disagree on a multitude of issues, the Hands Across the Aisle coalition has found common ground in our shared womanhood, our concern for sex-based rights, and our collective refusal to redefine sex as gender identity.

We recently came together to speak on a panel at The Heritage Foundation. You can watch that panel here.

In October 2015, I received an email from my children’s school principal that a gender non-conforming kindergartner had arrived. A whole host of demands quickly followed this announcement.

Everyone in this coalition has a story to tell and a reason behind her involvement. For me, it was as a mother to public school students that I first encountered the idea of gender as individualism gone mad. Likewise, it is as a mother concerned with the well-being of all children that I thoroughly reject the idea of a “gender identity.”

The belief that one’s internal sense of self determines maleness or femaleness and that subjective feelings take precedence over an objective physical reality constitutes a severing of mind from body. Our sex is who we are: it can’t be amputated from our body like a limb. But the true believers in gender ideology are hard at work, pulling in converts to this gnostic worldview that shuns the material that we humans are made of: the body. You can be assured that an ideology like this will, to use Pope Francis’s words, lead to the “annihilation of man” in our culture, in the law, and in the lives of those who fall prey to the tenets of this weaponized “civil rights” movement.

What worries me most is that schools across the country are quashing debate, abandoning academic excellence, and reducing themselves to pawns in a political movement whose claims are highly questionable, unscientific, and harmful to children. Public schools have a duty to serve all children, but a school cannot serve children and a totalitarian ideology all at once.

Transgender Ideology at My Children’s School

In October 2015, I received an email from my children’s school principal that a gender non-conforming kindergartner had arrived. A whole host of demands quickly followed this announcement. The bathrooms, the locker rooms, the uniforms—every aspect of the school’s practices that differentiated between the sexes would have to be made gender neutral. It was just the beginning of a wild ride into a world where schools have become “indoctrination hubs” and biological sex no longer exists.

A series of surreal events unfolded at our school.

Parents were told that students from kindergarten to fifth grade would have to be taught that gender identity, sex, and gender expression were all free-floating concepts, through insipid children’s books and propaganda framed as anti-bullying activism. These demands were, of course, a Trojan horse for trans advocacy in the classroom. This is a common tactic.

Parents were told that the school would be in direct violation of the law—specifically, Title IX and our state’s anti-bullying law—if the school didn’t equate sex with gender identity in policy and practice.

Parents were told—by the school’s lawyer!—that free speech creates a “hostile environment” when it critiques the transgender issue. Letters that parents wrote to the school board for public comment were heavily redacted. In some cases, 90 percent of the letter was blacked out.

The high school science teacher proclaimed that sex exists on a spectrum, and that sex is “assigned at birth.”

Parents hosted a presentation (which they had to pay for themselves) to provide a counterpoint to the biased treatment the school had given the gender identity issue. Well over a hundred local pro-LGBTQ protesters came to the presentation, prompting the local police to send a sergeant and two patrolling squads as protection.

Finally, even after a de facto gender inclusion policy was passed, a complaint was filed against the school with our city’s Department of Human Rights, claiming the school had refused this transgender child the ability to “transition” safely at school. In a totalitarian regime, nothing but total capitulation is acceptable.

So, what can we expect to see if we sit back and allow gender identity to trump biological sex in school policies?

First, schools will teach children to accept an ideology that is predicated on the lie that biological sex plays second fiddle to a self-proclaimed, subjective gender identity, and that the sex of one’s body is mutable or even irrelevant. This isn’t just an idea that you can tuck away in a unit study or an anti-bullying presentation. It will inevitably find its way into every aspect of a school and make a deep impression on the developing minds of children. For example, girls, under the regressive mandates of anti-bullying and gender inclusion policies, would have to agree to call boys in their locker room “girls,” effectively losing their rights to free speech and to privacy from males. And science—particularly biology—would die a quick death at the hands of a concept that necessarily eradicates observable facts about human sexuality. Gender ideology in the curriculum is a lie enshrined as truth.

Second, institutionalizing gender ideology will require that schools ignore the evidence that it causes real harm to children. You can’t extol the virtues of gender ideology and question its soundness at the same time. By celebrating transgenderism as a valid identity, schools are promoting a body-mind disconnect that may very well bring on the gender dysphoric state they were attempting to prevent. And when the widely accepted “affirmative” medical treatments of gender dysphoria in children are both poorly studied and glaringly injurious, we have nothing to celebrate.

We’re building a school-to-gender-clinic pipeline that will feed this new pediatric specialty with young patients. There are now more than thirty gender clinics specializing in youth across the United States, and the young patients who are under their care are often given bone-destroying puberty blockers at eleven, potentially sterilized with cross-sex hormones at sixteen, and permanently mutilated by plastic surgery soon after that.

Make no mistake, schools that endorse and celebrate transgenderism as valid are endorsing child abuse.

It’s Time to Speak Up

So, my fellow parents, I ask you:

Will we allow our young and vulnerable children to be fed a false anthropology rather than teaching them to speak the truth boldly?

Will we consent to our children’s sterilization rather than patiently guiding them toward an appreciation of their bodies?

Will we treat our children’s mental health issues with double mastectomies rather than demand that doctors provide a true remedy?

As a woman, mother, and member of Hands Across the Aisle, I answer with a resolute NO to each and every one of these questions. My children need me to look out for them as only a parent can do, with love, vigilance, and patience that refuses to condone self-harm masquerading as self-knowledge. For some mothers, this proves to be a gargantuan task, as they watch their teenagers fall under the spell of gender via social contagion, YouTube binges, and trans activists disguised as therapists. These parents deserve our encouragement and assistance through friendship, political action, and our voice in the public square.

Somehow we’ve come to a place where women who demand their gym shower be female-only are accused of bigotry, radical feminists are threatened with a fiery death for refusing to call men “women,” and lesbians are accused of being transphobes for refusing the sexual advances of trans “women.” The women of the Hands Across the Aisle coalition have had enough of this poisonous ideology. It is our intention to use our collective passion and resources to make space in the public square for all voices that are critical of redefining sex as gender identity. I am honored by this extraordinary opportunity to unite a Christian opposition to the concept of gender identity with that of my radical feminist and lesbian sisters, who have long provided intelligent and insightful criticisms of gender identity as a threat to women in law and culture.

At Hands Across the Aisle, we hope to embolden women to speak up for the hard-earned rights they will lose if gender identity is allowed to eclipse sex. I hope you will join me in refuting gender ideology wherever you see it, but most especially in schools where it strikes at the very heart of what it means to educate.

Emily Zinos works as a consultant with Ask Me First MN, a project of the Minnesota Family Council in partnership with the Family Policy Alliance.