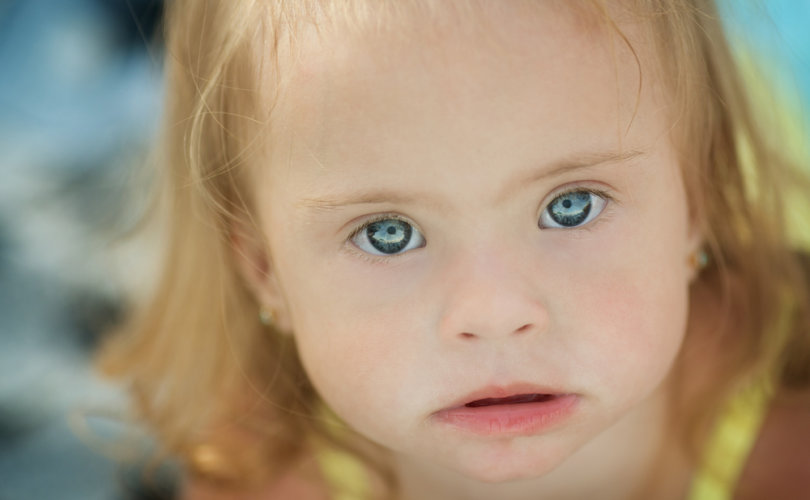 Jan. 3, 2017 (CMC) — In October, the government approved a new test for pregnant women that will make it much easier to detect and destroy babies with Down's Syndrome (DS) (see previous CMF blog posts here, here, here and here).

According to the BBC, the non-invasive prenatal test (NIPT) will be rolled out by the NHS from 2018.

NIPT involves taking a sample of blood from the pregnant woman which is then examined for abnormal fetal DNA. It is called 'non-invasive' because it doesn't involve 'invading' the mother's womb. It therefore carries no risk of miscarrying a 'normal' pregnancy.

It is claimed that NIPT will cut the number of women who need invasive tests like amniocentesis and chorion villus biopsy, which carry a 1-2% risk of miscarriage.

The move to make NIPT available on the NHS is extremely controversial and has led to the launch of the ‘Don’t screen us out’ campaign (DSUO). DSUO describes itself ‘as a grass-roots initiative supported by a collection of people with Down’s syndrome, families and Down’s Syndrome advocate groups led by Saving Downs Syndrome’.

A study published in the British Medical Journal on July 4, 2016 backs up their concerns.

The lead author, professor Lyn Chitty, and her colleagues calculate that in an annual UK screening population of 698,500, offering NIPT (as a contingent test to women with a Down’s syndrome screening risk of at least 1/150) would increase detection by 195 cases with 3,368 fewer invasive tests but, crucially, only 17 fewer procedure-related miscarriages.

If rolling out NIPT will result in 195 more babies with Down’s syndrome being detected, then assuming that 90% will then be aborted (the standard quoted figure), that means almost 180 more abortions for Down’s syndrome each year.

Most people are unaware that abortion is legal in Britain right up until birth for babies with disabilities. In 2015, a record number of 230 babies with special needs were aborted beyond 24 weeks, the age at which most will survive in a neonatal unit if born prematurely.

In total in 2015 there were 3,213 babies with disabilities aborted in Britain, over 1,000 of them more than halfway through pregnancy. Six-hundred and eighty-nine of these had Down’s syndrome. Elevent had cleft lip or palate.

Sally Phillips drew attention to the issue dramatically in a BBC documentary ‘A World Without Down’s Syndrome’, which aired on October 5. “What’s so dreadful, to the world, about Down’s syndrome?” she asked. The Bridget Jones actress, who has a son with the condition, questioned the ethics of pregnancy screening and abortion and asked why affected babies are viewed as a ‘burden’ in society. The programme understandably prompted fierce debate.

On Friday October 21, Lord Shinkwin’s Abortion (Disability Equality) Bill had its second reading in the House of Lords. Lord Shinkwin is arguing that the current situation is profoundly discriminatory – eugenic even. He wants to remove ‘ground E’ (1(1)(d)), which enables any baby with a significant risk of a serious abnormality to be aborted, from the Abortion Act altogether.

Recently, 279 medical professionals signed a letter accusing the Royal College of Obstetricians and Gynaecologists (RCOG) of “advocating that women with a prenatal diagnosis of Down's syndrome should end their pregnancy.” They said: “We utterly reject the implicit premise that the value of a human being is based on their economic contribution to society.” (see full text here)

The move to introduce NIPT into the NHS is also backed by powerful commercial interests.

In March 2015 the St George’s University Hospitals NHS Foundation Trust revealed that it was joining forces with the British firm, Premaitha Health to bring in this new screening test. Premaitha, which describes the test (marketed as ‘Iona’) as its ‘flagship product’, along with its shareholders, now stands to make a lot of money. Millions of pounds in fact. Each NIPT test costs between £400 and £900 pounds. Do the math!

Premaitha admitted this much in a press release earlier this year: “Premaitha anticipates that the endorsement by the NHS will accelerate private payer market growth in the UK.” More importantly, it will put them in pole position to pitch for NHS hospital tenders.

On October 27 at its AGM the company was even bolder. Non-executive Chairman Adam Reynolds, claimed that “the international landscape for non-invasive prenatal testing is evolving very considerably in Premaitha’s favour.” He added that the company was “exceptionally well placed to win significant market share as awareness of the availability of NIPT increases.”

In the light of all this, people may be surprised to hear that Premaitha’s share price rose by only 10.81% four days after the AGM to 10.25p. This is in spite of brokers Finn Cap and Panmure Gordon having target prices of 20p and 24p respectively on the stock.

But in an ironic twist, enthusiasm for buying the shares has been curbed by unresolved legal action. US biotechnology giant Illumina has launched patent infringement proceedings against Premaitha and others.

Nevertheless Premaitha has “absolutely no doubt that the developed world is moving” towards “widescale adoption of NIPT” and that it “is well placed to gain a large share of the market.”

So here we have it – a global drama involving pregnant women anxious about having disabled children, campaigners concerned about the eradication of people with disabilities, millions of pounds of taxpayers' money up for grabs, biotechnology companies hungry for profits and salivating shareholders seeking a quick buck.

But, caught in this toxic web of vested interests, the real victims in this whole drama are babies with a common genetic abnormality whose eradication will lift a perceived burden from some and make others very rich indeed.

The real test of an administration is in what it values – and in particular how it treats the most vulnerable members of society, especially when it costs something emotionally and financially to do so.

The British government, by this reckoning, is not heading in a good direction. Nor are biotech companies and their shareholders who are keen to profit from the search and destroy conveyor belt.

But disabled people and their families will not go quietly and I suspect we have not heard the last of this yet.