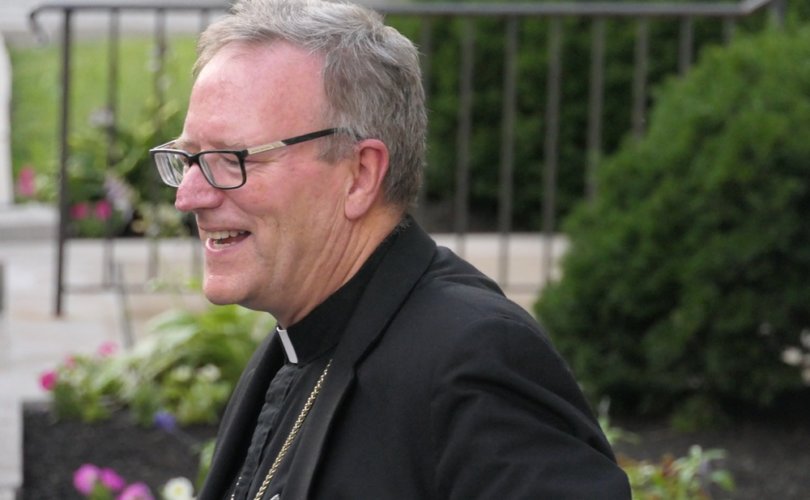 February 10, 2020 (CatholicCulture.org) — Bishop Robert Barron kicked off a heated online debate last month with his proposal “to introduce something like a mandatum for those who claim to teach the Catholic faith online, whereby a bishop affirms that the person is teaching within the full communion of the Church.” The suggestion that bishops would give their stamp of approval to some Catholic bloggers — and, more important, deny it to others — is terribly wrongheaded. Our bishops have much more important work to do.

In making his proposal Bishop Barron said: “I do think that the shepherds of the Church, those entrusted with supervising the teaching office, can and should point out when people on social media are harming the Body of Christ.” But his proposed solution — which has been dubbed online a “yellow check” system — is mainly a reaction against the dangerous level of vitriol that is unfortunately evident in some corners of the Catholic blogosphere. The proposal does not distinguish carefully between two different sorts of offenses: offenses against civility and offenses against doctrine.

Some online commentators employ a nasty tone. They deserve rebukes and admonitions and fraternal corrections — not just from prelates but from all good Catholics who notice the offenses. But the particular role of a Catholic bishop is to preserve the integrity of doctrine. If Bishop Barron had suggested that bishops denounce any online commentators who preach heresy, I would have quickly agreed. By emphasizing the question of editorial tone, however, he introduced a much more subjective judgment. In handing out the yellow checks, it seems, the bishop is not asking: “Does this site contradict established Catholic doctrine?” Instead he is asking: “Do I approve of this site’s approach?” The difference is enormous.

Bishop Barron runs his own burgeoning online media empire, and presumably would not have to worry about gaining the approval of his fellow bishops. He recently called for the formation of “an army of young priests specially educated and equipped to evangelize the culture through these means.” Those priests, too, could be confident of receiving yellow checks from the bishops who trained and commissioned them. But what of the thousands of lay Catholics who have devoted their time and energy to online work, sincerely believing that they could thereby enrich the life of the Church and further the spread of the Gospel? We would be at the mercy of the bishops: under pressure to apply for the yellow check, to wait patiently (how long?) for a judgment, to respond to any concerns that might arise in local chanceries. And we could be denied the yellow check — thus labeled as pariahs — if the bishop took exception to something we wrote.

Would it be relevant at this point for me to observe that some of the most vitriolic and uncharitable commentaries that I have read have been produced by writers who are published by diocesan papers, and by professors at Catholic universities? That is, by authors who have at least the implicit approval of their bishops?

And speaking of Catholic universities…

Bishop Barron explicitly suggested that his proposal would give the bishops a supervisory task similar to the one that Pope John Paul II entrusted to them in Ex Corde Ecclesiae, when he asked diocesan bishops to ensure that Church teachings were faithfully presented at Catholic colleges and universities within their dioceses. Yet the American bishops have very clearly not carried out this task. Many Catholic institutions of higher education — including the oldest, largest, wealthiest, and most prominent — are hotbeds of heterodoxy. Having failed miserably to make a mandatum system work for Catholic colleges, how could bishops now be expected to make a similar system work in the much more chaotic world of the internet?

But let’s imagine, for the sake of the argument, that some upright bishop would exercise his proper authority, and inform a blogger that he should no longer identify himself as “Catholic.” What could we expect? There is a precedent. In 1968, Bishop Charles Helmsing of Kansas City issued “an official condemnation of the National Catholic Reporter” and directed the paper’s editors “in all honesty to drop the term ‘Catholic’ from their masthead.” They did not. More than 50 years later — and despite a second public condemnation from another local bishop in Kansas City, where the paper is published — the Reporter continues to question and undermine formal Church teaching.

Still more remarkably, this newspaper — which is operating under episcopal condemnation — receives the support of American bishops, who grant the Reporter interviews, offer the paper for sale in the vestibules of parish churches, and advertise diocesan job openings in its pages.

Father James Martin, SJ, who tirelessly promotes the acceptance of homosexuality, regularly boasts that his book on the subject carries endorsements by two American cardinals. I have no doubt that he would quickly win a yellow check. I am not nearly so confident that I would pass muster. And I am virtually certain that some more conservative Catholic news sites would be denied episcopal approval. Indeed it is widely assumed that Bishop Barron had some of my journalistic colleagues in mind when he proposed the yellow-check system. In short I fear that the Barron Proposal would, in practice, be a means by which American bishops would seek effectively to censor certain viewpoints, to silence certain critics.

If our bishops enjoyed the confidence of their people, such fears could be dismissed lightly. But here is the most important reason why the yellow-check system would be a disaster: American Catholics do not trust their bishops. Through two decades of scandal, our shepherds have forfeited the trust of the faithful. Today, sadly, we could not be confident that our bishops would use their authority to safeguard orthodox doctrine. We could not be confident that they would avoid the temptation to mute criticism and censor embarrassing disclosures. All too plainly our bishops have failed us — in precisely those areas.

Here's my counter-proposal: to restore confidence in the hierarchy, our bishops should seek “yellow checks” from the laity, to be awarded to those prelates who have ensured the faithful teaching of Catholic doctrine in their parishes, schools, and universities.