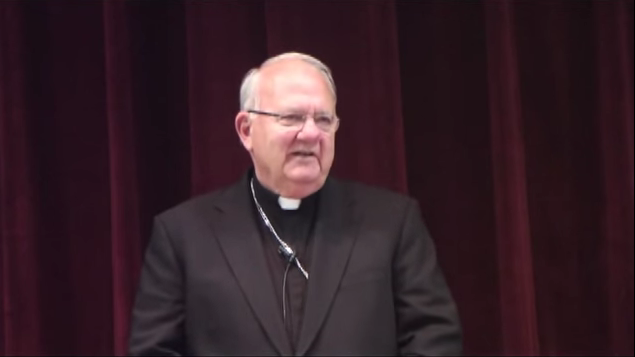 Bishop Robert Lynch made comments which suggest that Catholic teaching on marriage and sexuality somehow breeds contempt for gays.

It’s time to be blunt.

Early  morning, 49 of our fellow Americans were killed by a purportedly gay, radical Islamist, who pledged allegiance to ISIS. The killer scoped several locations for his heinous crime, including Disney World where tens of thousands of families visit every day. He ultimately committed his crime at a gay night club.

Shamefully, in the days since the massacre, partisan ideologues have used the mass-murder to demonize Christians, gun owners, and anyone who doesn’t fully embrace the radical LGBT agenda.

…and it’s not just the ACLU.

Several of our own Bishops are engaging in this madness.

This is disgraceful. And wrong.

Every person killed in Orlando was made in the image and likeness of God. Human dignity does not stop at the doorstep of a gay night club. Each of the victims was loved by God beyond measure.

Not a single Catholic has celebrated this crime. Not one Catholic voice has called for violence against gay and lesbian people. But now, an increasing number of leaders are attempting to exploit the terrorist attack in Orlando to advance political agendas — and they are even blaming us!

Did you get that? You and I are partly to blame for Orlando.

Catholics who believe in the natural institution of marriage and the intrinsic beauty and complementarity of men and women, and who desire to protect women and children from predators in public restrooms helped fuel this terrorist attack? This is outrageous.

This is nothing more than the shameless exploitation of a terrible terrorist attack to fuel hatred of anyone that believes in the time-honored institution of marriage, and traditional sexual morality.

What happened in Orlando was an act of terrorism, fueled by a radical ideology and carried out by a mad man. To suggest that faithful Catholics helped encourage this attack is beyond disgraceful.

We will not stand for it. And neither should you.

I am asking every Catholic Vote member to write or call Bishop Lynch in St. Petersburg today.

Ask him to clarify his comments, which suggest that Catholic teaching on marriage and sexuality somehow “breeds contempt for gays.” Ask him to consider issuing a public clarification.

Please do not personally attack the Bishop. He remains a shepherd of the Church. However, we must defend our rights as Catholics to follow the teachings of our Church — and respond together to the insinuation that doing so leads to violence.

We ask you to be charitable, but firm.

Someone has to stand up.

Reprinted with permission from Catholic Vote.