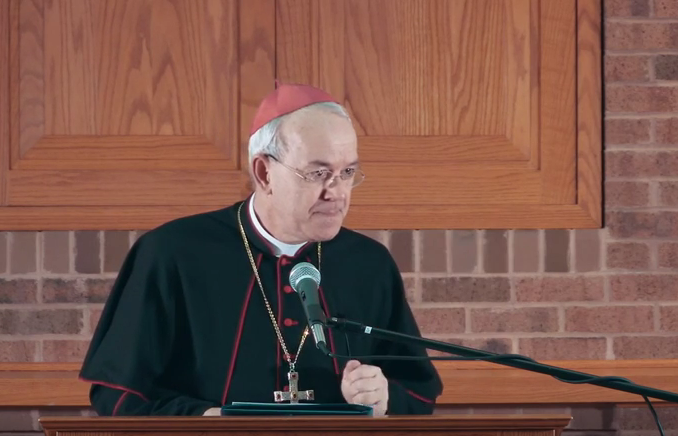 Speaking to about 100 in attendance, his passionately-made case for the unchangeable nature of marriage was grounded in the proclamation of Jesus Christ from the Gospel of Matthew:

Our Lord Jesus Christ the Eternal Word and the Eternal Truth in Person, restored the original dignity of human nature in a most wonderful manner, also regarding the sexuality of the human being, which was created in a wonderful manner in the beginning.

Through the fall in sin, the dignity of human sexuality had also been wounded. Because of the hardheartedness of the fallen man, there was introduced by Moses even divorce, and this contrary to the absolute indissolubility which God commanded.

Also the Pharisees and scribes had known the divine truths about the beginning of marriage, they nevertheless endured to receive from Jesus, as from a well-known and recognized teacher, the legitimization of the practice of divorce, a practice which was already widely adopted in those times, perhaps for ‘pastoral reasons.’

They asked Jesus about basic legitimacy of divorce. Jesus proclaimed to them, and through His Gospel He still proclaims to the man of all times the ever-valid and unchangeable divine truths about marriage: ‘In the beginning it was not so. And I say to you, whoever shall put away his wife and shall marry another commits adultery.’

Jesus restored in all its seriousness and beauty the divine truth about marriage and human sexuality. Regarding these divine truths which Christ authoritatively proclaimed, he did not admit any sophisms.

His Excellency, an auxiliary bishop of Astana, Kazakhstan, did not pull any punches when it came to his thoughts on proposals that were being presented at the Synod on the Family, then underway in Rome. He expressed grave concern especially with regard to certain arguments that portrayed traditional practices on the reception of the Eucharist as uncompassionate – practices which he emphasized are based on doctrine and are not arbitrary.

Recalling several historical cases when marriage was under attack – from the Pharisees to Luther, Napoleon and some more recent cases in Europe – Bishop Schneider recalled how faithful Church leaders often had to stand against their brother bishops and against the whims of earthly powers to defend the one human institution that predates every existing government.

Martin Luther challenged the Church’s teaching on marriage, calling it “an earthly thing,” when his patron, Prince Philip, wanted have a “double marriage.” In the sixth century, the Greek Episcopate allowed “divorce, out of mercy” in the case of Emperor Justinian. In this case, however, the pope reprimanded these bishops, asking them to resign and even excommunicating them. “He was a very Catholic pope,” added Bishop Schneider.

In the 16th century several Catholic bishops accepted the divorce of King Henry VIII – indeed, all the English bishops did, except for Bishop John Fisher, who was executed for his resistance. His Excellency also noted the heroism of Saint Thomas More, who joined Bishop Fisher and was also martyred for his defense of the Faith and of marriage. Of course, a schism followed, leading the creation of the king-led Church of England.

Napoleon brought the entire College of Cardinals from Rome to Paris to oversee his second marriage. The pope had not approved, but Napoleon forced cardinals to participate. Some cardinals resisted and were forbidden from wearing the cardinal’s cassock and relegated to wearing a simple black cassock. They were called the “black cardinals” for their resistance. “We have to hope and to desire that we have in our days more ‘black cardinals,’” said Bishop Schneider.

His Excellency recalled I Corinthians chapter 6 where Our Lord says that “the adulterers will not inherit the Kingdom of God,” as well as the early Gnostic heresy which held, in part, that practice could contradict doctrine, and Luther’s claim that a sinful lifestyle does not matter if one has faith. He finds shades of these earlier errors present in the proposals about “remarriage” and Communion presented at the Synod. He was also critical of the proposals regarding communion for those who commit homosexual acts, as if these persons’ good qualities – which they very likely have – somehow render unsinful the conduct which they embrace as good and with which they have chosen to primarily identify themselves publicly. “Cynical trickery” is how Bishop Schneider referred to the attempt to use the good qualities of those who reject Church teaching to essentially excuse other actions, illustrating his point by saying that we wouldn’t attempt to excuse the actions of Mafiosi by focusing on any good they do.

His Excellency quoted from first Vatican Council’s Canon 4 “On Faith and Reason”:

If anyone says that it is possible that at some time, given the advancement of knowledge, a sense may be assigned to the dogmas propounded by the Church which is different from that which the Church has understood and understands: let him be anathema.

Calling on his brother priests and bishops to not be intimidated by those who seek to change or set aside Church doctrine on marriage and sexual morality, Bishop Schneider called those who raised such radical proposals “disciples of Moses, or of Epicurus,” not of Christ. Such proposals he said would take the faithful back to the time before Christ, to a time of “hardheartedness.” He quoted St. Paul in Ephesians 21 “Veritas in Jesu” – Truth in Christ, which the Church has transmitted, “will bring new life, and that alone matters.”

Bishop Schneider also graciously answered questions from those in attendance, whose applause showed their gratitude upon hearing their concerns voiced by a shepherd of the Church, and reinforced by a historical and theological defense of true and immutable nature of marriage. Bishop Schneider, for his part, also expressed gratitude and support for families who, as Cardinal Dolan pointed out recently, also find themselves treated as a marginalized portion of society.

Please pray for Bishop Schneider and all our faithful shepherds who are trying their best to make sure that charity and truth are both held up in the defense of marriage and family!