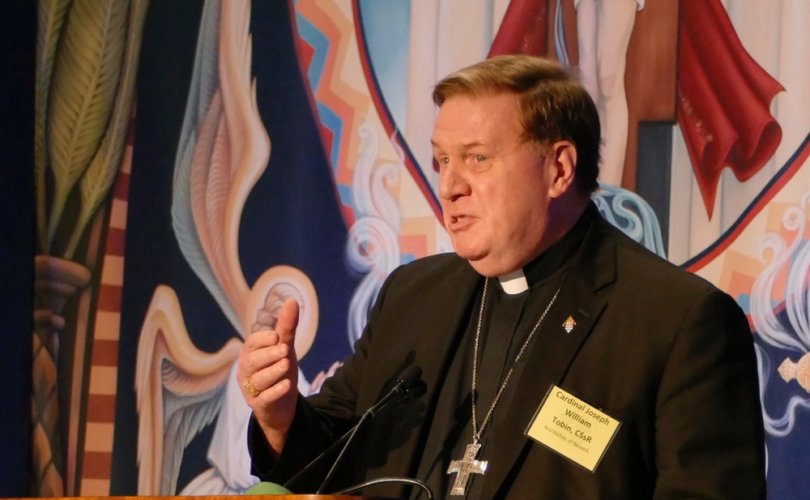 June 28, 2018 (LifeSiteNews) – Now-disgraced retired cardinal of Washington, DC Theodore McCarrick was permitted to live out his role as a bishop over the past thirty years despite the fact that some bishops knew him to be guilty of sexually abusing seminarians.

Since this past week’s McCarrick revelations by the Archdioceses of New York and Newark, that McCarrick was found to have credible allegations of sexual predation against a minor, and two adult males, there can be little doubt that the American hierarchy was aware of allegations of his past salacious and sexually exploitative misconduct.

Why did Newark Cardinal Joseph Tobin and Bishop James F. Checchio, of Metuchen, New Jersey, not release the decades-old McCarrick settlement information immediately to protect potential victims? Joseph Tobin has been Cardinal of Newark since January 2017, and Bishop Checchio has been Bishop of Metuchen since May 2016. The first obligation of a Cardinal and bishop is to review the clergy abuse settlements and claims to ensure the safety of Catholics. Surely, complaints against Cardinal McCarrick would have drawn their immediate attention!

Yet, Cardinal Ted McCarrick rose to the highest levels of the Catholic hierarchy and, apparently none of his brother Bishops or Cardinals stepped forward as a whistleblower to protect unsuspecting boys and young males.

During the day, as Cardinal of the powerful Washington, D.C. archdiocese, Cardinal McCarrick rubbed shoulders with the political power elite. He celebrated the prestigious Red Mass where members of the U.S. Supreme Court, Congress, and political elites attended every year. Cardinal Ted McCarrick concelebrated funeral masses for the rich and politically famous, like Sen. Ted Kennedy and Beau Biden, Vice President Joe Biden’s son. He was the go-to Cardinal for the rich and powerful.

His days were busy cultivating contacts, doing favors for the rich and powerful of business, government and politics. He traveled around the world for Catholic Relief Services. “Uncle Ted” McCarrick was the ultimate insider Prince of the Church. It’s no wonder that an “influential Italian gentleman” urged him to lobby for Pope Francis' election, as McCarrick himself related in an October 2013 talk at Villanova University.

For years, the McCarrick misconduct stories surfaced and, then, seemingly retreated into oblivion. Yet, one theme prevailed in the persistent allegations: prelates and people were informed, and no one in power did anything. The DC power brokers, New York elite, and mainstream media colluded with the Catholic hierarchy in a conspiracy of silence to protect McCarrick for nearly half a century. No one spoke about the credible findings and settlements with McCarrick victims.

Despite his abuse of seminarians, Cardinal McCarrick continued to have regular access to them, even staying in the seminary while visiting Rome. In his Villanova speech, Cardinal McCarrick reveals that during the conclave he stayed at the North American College (NAC) Seminary in Rome.

McCarrick residing at the seminary dormitory is like the fox guarding the chicken coup. Rod Dreher highlights McCarrick’s risk to seminarians and that the Vatican was repeatedly warned about him. In his article, “Cardinal McCarrick is a Molester”, Dreher describes the allegations surrounding McCarrick’s sexual predatory modus operandi:

It had been rumored at the time that Theodore McCarrick, the Archbishop of Newark, was going to be moved to Washington, DC, and to be made a cardinal. This group traveled to Rome to warn the Vatican that McCarrick was a sexual harasser of seminarians. The story this priest shared with me was that McCarrick had a habit of compelling seminarians to share his bed for cuddling. These allegations did not involve sexual molestation, but were clearly about unwanted sexual harassment.

Over the decades, many others alleged and warned about McCarrick’s predatory predilection for seminarians. The prominent sociologist and clergy abuse expert and author, Richard Sipe, wrote a passionate plea to Pope Benedict about McCarrick’s alleged predatory sexual conduct. Read Richard Sipe's April 24, 2008 letter to Pope Benedict which the Vatican acknowledged receipt of in a letter by the Papal Nuncio Pietro Sambi on May 5, 2008.  Sambi acknowledged that Sipe’s letter was delivered to the Vatican via the papal diplomatic pouch. The Vatican knew full well about the danger of McCarrick to young seminarians.

While I was Adjunct Professor at a Pontifical Seminary, St. Mary’s Baltimore (1972-1984) a number of seminarians came to me with concerns about the behavior of Theodore E. McCarrick, then bishop of Metuchen, New Jersey. It has been widely known for several decades that Bishop/Archbishop now Cardinal Theodore E. McCarrick took seminarians and young priests to a shore home in New Jersey, sites in New York, and other places and slept with some of them. He established a coterie of young seminarians and priests that he encouraged to call him “Uncle Ted.” I have his correspondence where he referred to these men as being “cousins” with each other.

Clergy sex abuse investigative researcher, Randy Engel describes in her important tome, The Rite of Sodomy, that “New York insiders glibly refer to McCarrick by his feminine name 'Blanche' and Vatican officials have long been aware of his penchant for young handsome seminarians” (page 758).

Did any Church official bar him from their seminaries?

Did any Church officials report him to law enforcement?

Why would the rector of the North American College (NAC) Seminary even permit Cardinal McCarrick to stay there and subject his seminarian students to his possible predation in light of the Metuchen settlements?

Why didn’t Cardinal Donald Wuerl, the present Archbishop of Washington, D.C. restrict McCarrick’s access to young males and altar boys while residing in his Archdiocese? After all, Wuerl is the spiritual shepherd of the diocese and has authority over the care and protection of his spiritual flock.