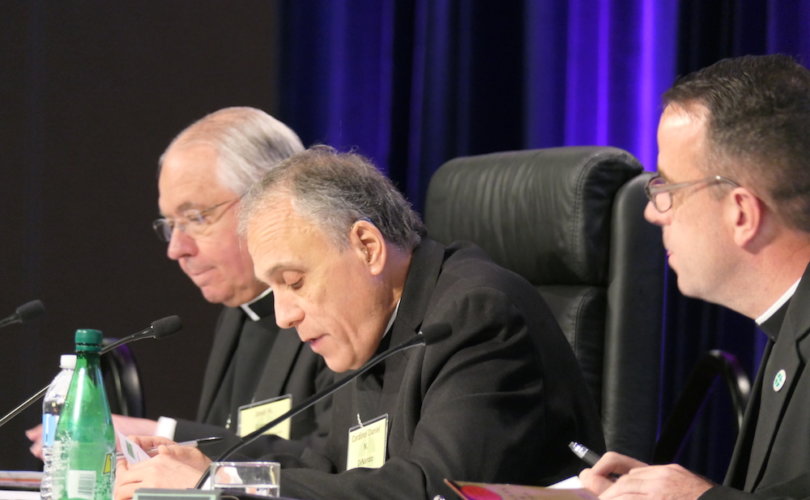 July 20, 2018 (LifeSiteNews) — America’s politicized Catholic bishops – and unfortunately, that means most of them – have had a pretty bad year. Their campaign demanding amnesty for illegal aliens and a wide-open border policy has been a flop. Consider: They opposed two immigration bills in Congress for not going far enough, but both failed for going too far. Some bishops are so frustrated that they lash out at politicians, even strong-pro-lifers who oppose Obama’s unconstitutional “Dreamers” amnesty.

Amnesty is still the bishops’ prime mandate. But they have also suffered setbacks at the Supreme Court.

First, the justices ruled that President Trump’s temporary ban on travel to the U.S. from several terror-ridden countries was a proper exercise of his powers as chief executive. Curiously, bishops opposed the ban on the basis of “religious liberty” for Muslims, even though the countries affected included Venezuela and North Korea.

Bishops lost again in Janus v. AFSCME, when the court ruled that public employees, including millions of Catholics, could not be required to pay hefty dues to unions that support abortion rights and other objective evils. Surprisingly, the USCCB supported the monopoly power of the left-wing unions, and not the religious liberty of Catholics. A prominent bishop with degrees in both canon and civil law disagreed, however.

Let’s face it. America’s Catholic bishops have opposed Donald Trump ever since he declared his candidacy three years ago. To be sure, they have quietly acknowledged his historic pro-life, pro-religious liberty policies. His views on the HHS mandate, UN abortion funding, Planned Parenthood funding, and the Mexico City policy have been outstanding. Alas, that’s not enough for the lobbyists at the bishops’ Washington D.C. USCCB headquarters. These “experts,” paid with contributions from the faithful, spend most of their time attacking the administration on issues like health care, refugee policy, Cuba policy, the Paris Agreement, the death penalty, the weather, immigration, foreign aid, sanctuary cities, deportations, and border security.

If these losses weren’t enough, last month a new disaster struck. Still recoiling from their political setbacks, the bishops were stunned by reports of sexual abuse of a minor by one of the most powerful Catholic prelates in recent American history, Cardinal Theodore McCarrick, the now-retired Archbishop of Washington. While the alleged crime occurred some 50 years ago, bishops in the Metuchen and Newark, New Jersey dioceses revealed that McCarrick had more recently been accused of “sexual misconduct” on three different occasions as bishop there. Two of them resulted in secret settlements.

Coverups never work, and they didn’t this time. The McCarrick news rocked the American church. Reports of his homosexual overtures to seminarians and priests had circulated for years, but his targets would not go on the record (Update: now former seminarian Mark Crawford has). After all, McCarrick was a powerful man who could ruin any clerical career – and a bishop’s power is total and final.

USCCB officials have curtly admitted that there are a lot of homosexuals in the Catholic clergy. It’s not a subject they like to talk about, and they certainly didn’t want the McCarrick revelations to open the door to more questions. What to do?

Desperate to avoid more revelations, bishops chose to change the subject to their favorite location – the Mexican border.

Bishops chose to make public the news about McCarrick in the midst of a media blitz revealing the shocking fact that criminal aliens apprehended at the border were incarcerated in jails designed for adults, and children crossing the border were housed in different facilities, free of felons, rapists, and murderers. Anxious to put the McCarrick scandal behind them, the bishops seized on this fake news with a vengeance. Not only could they blame somebody else for abusing minors, they could also manipulate the “crisis” to milk more government funding for their NGOs, funded by the U.S. government to care for foreign minors, refugees, and illegals.

Many Catholics are unaware that our bishops receive hundreds of millions of taxpayer dollars a year from the federal government. Our shepherds seldom disclose that fact, but those funds have been flowing for years, and the hierarchy’s secrecy has invited abuse, fraud, and outright dishonesty.

Case in point: In January 2008, the Diocese of Richmond, Virginia, was caring for a 15-year-old Guatemalan girl under a federal grant from the Department of Health and Human Services (HHS). When they discovered she was pregnant, employees of Richmond Catholic Charities took her secretly to procure an abortion.

The diocese covered up the incident, even paying for the employees’ silence, for months. But when HHS began its own investigation in April, three USCCB officials informed all 350 of their brother bishops of the incident in a letter dated April 23. No bishop told the public until this writer exposed the scandal and the country-wide cover-up in June – two months later.

During my investigation, I learned that Catholics in the Bush administration had worked hard to get that multimillion-dollar grant for the USCCB. One sorely disappointed Catholic official told me, “It’s a shame that the U.S. government has higher moral standards than our Catholic bishops.”

Why the silence? Well, the bishops really needed that money. As Tucson Bishop Gerald Kicanas once observed, donations from the faithful have plummeted since the abuse-and-cover-up scandals broke into the open in 2002. In the 15 years since, our bishops have chosen to make up for that drop in voluntary contributions by competing with other NGOs for taxpayer funding. Since 2007, the USCCB has received $369 million in the single HHS grant category of “care for immigrants and refugees.”

So here’s how the bishops have reacted: at their meeting in Fort Lauderdale last month, bishops didn’t mention McCarrick. No, the bishops beat only one drum: bash the border policies of Trump (but not of the generous Obama, whose administration had the same policy), bash the Border Patrol, and threaten Catholic government employees with being excommunicated or barred from receiving Communion.

You’ve got to admire their audacity. When Tucson Bishop Edward Weisenburger threatened the Border Patrol in Fort Lauderdale, the laity were outraged. After all, we asked, why had he never bothered publicly to criticize his own congressman, a 100 percent pro-abortion Catholic? So two weeks later, the bishops tried putting on the white hats. In a widely-publicized visit to a border residence for minors, USCCB president Cardinal Daniel DiNardo oozed with charity. “There are no villains,” he said.

Yes, the Cardinal absolved Catholic Border Patrol agents doing their jobs, but he also absolved Mexico’s criminal Coyotes. Those drug gangs charge some $5,000 a head to traffic the illegals to the U.S. border in the first place. Unlike the Border Patrol, the Coyotes are notorious for abandoning women and children in the desert if they can’t keep up. But “there are no villains.”

Why the absolution? Unfortunately, the Coyotes supply the bishops’ NGOs with a steady stream of federally-funded customers. And that means income. So prelates like Los Angeles Archbishop José Gómez use the “crisis” to advocate lobbying Congress for amnesty, teaching illegals to evade the law, and, of course, open the borders to more illegals, who will bring with them more federal funding for the bishops’ NGOs.

Coyotes, cover-ups and cash. What have America’s bishops learned from the scandals?