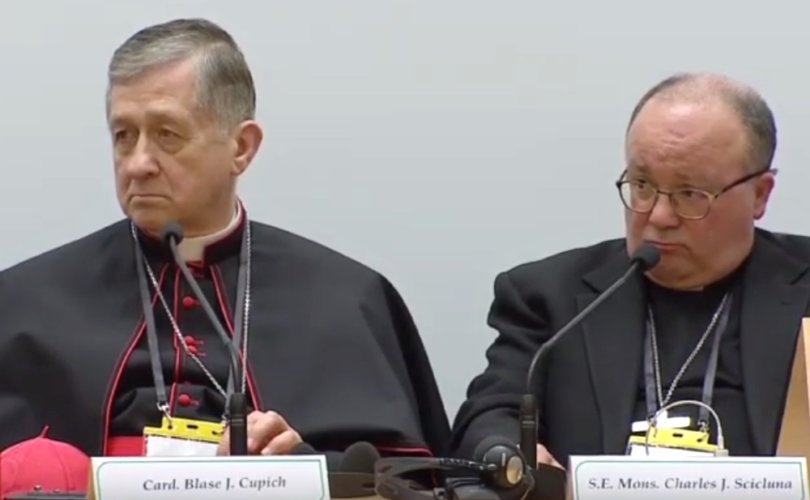 March 13, 2019 (L'Espresso) — It is a fact, not an opinion. The words “adultery” and “homosexuality” have both disappeared from the Magisterium of the Church, the highest, that which reports to the Roman pontiff.

About the first word this was already known. It disappeared completely just when it would have been most natural to say it, at the two synods on the family and shortly afterward, when Pope Francis settled the accounts in the exhortation “Amoris Laetitia.”

The disappearance of the second is more recent. And this too happened right at the moment at which it seemed impossible not to say it: at the February 21–24 summit at the Vatican on sexual abuse committed by priests and bishops, almost all of it against the young and very young of the same sex.

“It is known that when one wishes to marginalize or eliminate some truth, there is no need to contradict it openly; on the contrary, this would be the worst strategy, because it would prompt open reactions and draw attention. Much better, instead, to pass over it in silence, not talk about it anymore, to lock it up with the old junk in the attic or the basement, and over the span of some time all memory of it will be lost, and life will go on as if it were no longer there.”

This observation was made by Dom Giulio Meiattini, a Benedictine monk of the abbey of the Madonna della Scala in Noci, professor of theology at the Pontifical Athenaeum of St. Anselm in Rome, in the preface to the second edition of his book “Amoris laetitia? The sacraments reduced to morality.”

The preface can be read in its entirety on the blog of Aldo Maria Valli. But it is enough here to sample the passages most focused on the banning of these two words.

The first change, which does not seem to have been grasped in its effective gravity because it has been dissembled, is the complete disappearance, not to say the banning, of the word 'adultery.' This is entirely absent from the two 'Instrumenta laboris' preceding the synods of 2014 and 2015, absent from the respective intermediate relations ('Relationes post disceptationem'), never used by the two final documents submitted for the approval of the synod fathers, and finally definitively buried by 'Amoris Laeitia.' Not a detail of little account. The teaching of the Church, from the time of the Fathers, has always made unmistakable reference to the evangelical and New Testament texts relative to adultery as an essential part of its teaching on indissoluble marriage, with the relative consequences on pastoral practice and canonical discipline. In the aforementioned presynodal, synodal, and postsynodal documents, however, these passages are never expressly cited, apart from a couple of fragments of Mt 19:8-9, from which however is censored precisely the passage that makes explicit reference to adultery.

It is the passage in which Jesus says that “whoever repudiates his wife, except in case of concubinage, and marries another commits adultery.”

One must have the honesty to say it and to recognize it: already for some time in the Church there is very rarely any use of the word 'adultery' in preaching or in catechesis. Now instead, in deference to chapter 8 of 'Amoris Laetitia,' the preference is to use the neutral and innocuous term 'frailty,' which in most cases also replaces the very word 'sin.' Occasional conjugal infidelity or stable new unions subsequent to the sole marriage celebrated before God are no longer designated with the appropriate term with which Jesus and the Christian tradition define them: adultery. … In the two synods and in 'Amoris Laetitia' the sin of adultery has been erased not with a sponge stroke, but rather with a stroke of silence: it is simply no longer spoken of. And what has become of all of those New Testament passages, above all from the gospels, that speak of it openly? All that appears of them is a faded reference in parentheses, preceded by the initials 'cf.'

The disappearance of the second word from the Church's magisterium — Dom Meiattini points out — has happened more gradually — first with a change of meaning and therefore of judgment, and then with its total abandonment.

The key moment of the change of judgment on homosexuality can be seen in paragraphs 50, 51, and 52 of the “Relatio post disceptationem” made public halfway through the 2014 synod on the family.

When on Ocober 13, 2014 the “Relatio” was presented to the press, cardinal delegate Péter Erdő — who formally figured as the author of the document — dissociated himself from those three paragraphs and attributed their surreptitious composition to Bruno Forte, appointed by the pope as special secretary of the synod. And the next day another cardinal of the highest rank, the South African Wilfrid Napier, denounced the irreparable damage that had been done with that coup de main: “The message has gone out: This is what the synod is saying, this is what the Catholic church is saying. No matter how we try correcting that … there's no way of retrieving it.”

What was written, in fact, in those three paragraphs? That homosexual behaviors must be “accepted” and that “mutual support to the point of sacrifice constitutes a valuable mainstay for the life of couples of the same sex,” better still if gladdened by children.

These expressions prompted substantial and understandable reactions in the synodal assembly, so much so that at the 2015 synod and finally in 'Amoris Laetitia' there was a reversion to a few phrases that were much more sober and non-problematic. But it is clear that the words used in those paragraphs represented in any case an attempt at indirect legitimization, not even so veiled, of homosexuality and even of the adoption of children by homosexual couples.

In the run-up to the 2018 synod on young people, expectations were therefore high over what the hierarchy would say on the subject of homosexuality, after there peeped out in its base document, the “Instrumentum laboris,” for the first time in an official text of the Church, the not innocent acronym LGBT.

Then, however, in the final document — in the composition of which it was communicated that “Pope Francis had also taken part personally” — only one brief generic reference was dedicated to homosexuality, in paragraph 150.

In regard to this, Dom Meiattini observes:

At first reading this seems to be a matter of a paragraph that at bottom is innocuous. The talk is of respect for homosexual persons, of pastoral initiatives for their integration. It is clear that no one would want to discriminate against these persons and fail to respect them. But what is striking, in these phrases, is not so much what is said, but rather the silence. The silence around the common doctrine of all time, according to which the homosexual inclination represents a disorder and giving in to it a sin. Silence, as is seen, seems to have become a method for softening consciences and intelligences. In keeping quiet one opens the way to oblivion.

And this brings us to the summit of February 21–24, 2019, from which there disappeared entirely not only the notion of but even the word “homosexuality.” And to those at the press conference who asked why, Cardinal Blase Cupich and Bishop Charles Scicluna — the two main pilots of the event by the pope's mandate — responded that “homosexuality has nothing to do with the sexual abuse of minors,” even though the evidence of the facts says the opposite.

Take note. The word “homosexuality” does not even appear where it would have been practically inevitable, if not obligatory, to say it. There is one passage in the most lauded relation of the nine given in the assembly, in which the Nigerian sister Veronica Openibo lists the “other issues around sexuality” in addition to that of the sexual abuse of minors that is the object of the summit. And here is the list: “misuse of power, money, clericalism, gender discrimination, the role of women and the laity in general.” Full stop. Homosexuality is not there — replaced with its opposite, gender discrimination, which implies homophobia.

It is a silence, this — Dom Meiattini notes — that makes it such that by now in various parts of the world there are “priests and bishops who in practice recognize homosexual partnerships, even bless them, hope for their civil regulation and carefully avoid calling them what they are: a moral disorder, a sin that requires penitence, conversion, and forgiveness.”

It remains to be explained if this twofold strategy of silence, on adultery and homosexuality, adopted by the Church of Pope Francis, is part of a coordinated and targeted plan.

The response of Dom Meiattini is affirmative. And he explains it as follows:

Between the downgrading of conjugal infidelity and illegitimate unions between man and woman from the sin of adultery to a simple imperfection or frailty, on the one hand, and the beginning of a subtle legitimization of homosexual relations, above all if they are “faithful,” on the other, there exists a clear relationship of consequentiality.

In fact, if 'so-called irregular' (as 'Amoris Laetitia' calls them) unions between man and woman are no longer called adultery, but on the contrary do not even represent 'true' irregularities but are only 'frailty' or 'imperfections' with respect to the evangelical conjugal ideal (again according to the language used by 'Amoris Laetitia'), there falls the first obstacle for a recognition of the use of sexuality outside of marriage, at least as not condemnable. If we add to this the pastoral accessory of 'laissez-faire' (like entrusting pastoral positions to publicly cohabiting homosexuals, etc.), now the way to a tacit and de facto admission of same-sex couples outside of marriage is opened at least partway.

One can thus understand better the words of Cardinal Walter Kasper on the verge of the publication of 'Amoris Laetitia': that this would be only the first of a series of epochal changes in the history of the Church.