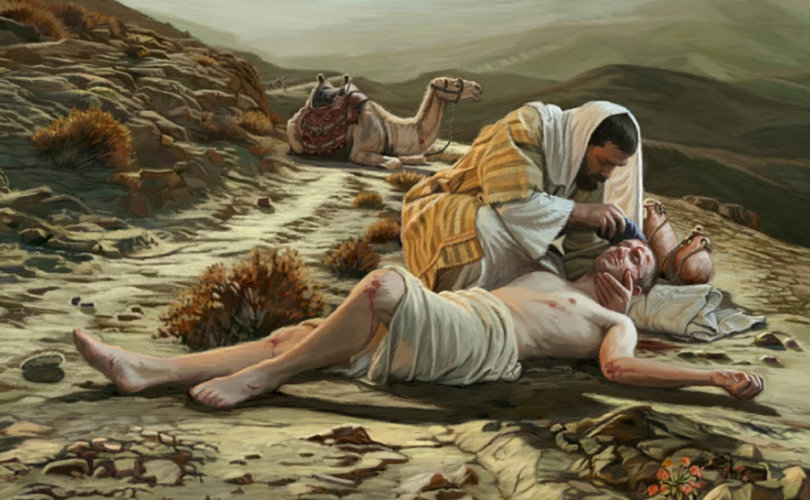 July 31, 2017 (The Wanderer) – Consider the Good Samaritan. He wasn’t a government bureaucrat. He helped people voluntarily — with his own money. The man in the ditch undoubtedly thanked the Good Samaritan. But here’s the secret of Christian charity: A Christian Samaritan answers the injured man, “No, thank you, for giving me the opportunity to serve a brother in Christ.”

Thank you — thank you.

Has a government bureaucrat ever thanked you?

Christian charity is a theological virtue — as St. Paul says, “the greatest of these is caritas” — charity.

Justice is also a virtue, a cardinal virtue.

And like all virtues, charity and justice are voluntary.

On the other hand, today’s ideological brand called “social justice” is mandatory. It isn’t justice at all, because it is not voluntary.

“Social justice” always requires government force. Even if they call it “charity.”

If you’re good at math, look at it this way: “Social Justice minus government force equals zero.”

So “government charity” is an oxymoron. The government can’t love — it can only command.

The very notion of something called “mandatory charity” is Doublethink, right out of Orwell and Big Brother.

But it is also a dagger aimed at the heart of true, voluntary charity.

After all, we can hardly call it virtuous to take money from a man by force, give it to a third party, and pat ourselves on the back for our generosity. But that’s what “social justice” does. All the time.

And this temptation has become so much a part of American political life that even many Catholic bishops and intellectuals have fallen for it.

Voluntary charity. Mandatory “social justice.” These two opposing visions of virtue are in conflict today in the Catholic Church — and that conflict has a history, a rationale, and a troubled future.

In the nineteenth century, our bishops’ pastoral letters warned of sin and Hell. With voluntary contributions large and small, those bishops and their flocks built thousands of churches, schools, convents, and orphanages.

One hundred years ago, The Catholic Encyclopedia defined charity the old-fashioned way: “public charity is more mechanical; less sympathetic; more wasteful; it encourages people to claim public relief as a right”; and, most important, it “inflicts a mortal injury upon the spontaneity of charity and the sense of personal responsibility towards the unfortunate.”

That view of charity slowly changed in the first half of the twentieth century; after Vatican II, it was quickly turned upside down.

Enter the “seamless garment.” Exit preaching on the unpopular truths of Humanae Vitae.

And today, now that we’ve graduated from charity to “social justice,” we’re closing churches, schools, and convents by the thousands and selling them to mosques, corporations, and casino operators.

And all these once-revered institutions have gone into the tank, big time, for government funding — to the tune of hundreds of billions of dollars over the past fifty years, all told.

Why? Because it’s easier to get money from politicians than from voluntary donors.

And why is that?

It’s not their money.

In his Through the Eye of the Needle, a brilliant history of charity in the late Roman Empire, Princeton historian Peter Brown explains.

Briefly put, Rome’s wealthy nobility vied with Caesar to give more “corn” (wheat) to the masses. These secular leaders did so because, in return, they would be rewarded with “glory, honor, and gratitude.”

Consider our current day. When Catholic welfare agencies annually receive hundreds of millions from their government paymasters, who gets the credit?

Not the bishop — he’s just running an NGO funded by federal contracts.

Not the Church. It’s not her money.

Not the faithful. They pay their taxes with a gun to their head. They gain no merit in Heaven for that.

The answer is, none of the above.

The politician gets the “glory, honor, and gratitude.”

And no politician gives away our money for nothing.

When the politician gives the bishops taxpayer dollars, what does he get in return?

The bishops warmly bestow upon the “generous” (with our money) politician the Catholic “seal of approval.”

And what if the generous politician is pro-abortion? After all, canon 915 requires that such perpetrators of manifest scandal be denied the Eucharist. For that question, Timothy Cardinal Dolan has a ready answer. “Most [bishops] don’t think it’s [canon 915] something for which we have to go to the mat,” he told Cruxmag.com three years ago.

In 2006, Theodore Cardinal McCarrick of Washington effectively said: The bishops certainly weren’t going to bite the hands that feed them!

“After all,” he told a gathering of Canada’s bishops, “[taxpayer] money is needed for Catholic hospitals, charities and education.”

Let me put it another way. If the price is right, we won’t follow canon law. Yes, the priceless imprimatur of Holy Mother Church is sold for a measly few hundred million dollars a year

One is reminded of Peter Kreeft, who once observed that Judas was the first bishop who ever received a government grant.

There are two questions here: First, why does the federal government want to take over Christian charity? And second, why would our bishops ever let it happen?

Well, the government part is easy. The Catholic Church is government’s major competitor. To tyrants, we’re the enemy. Holy Mother Church is the last bulwark of freedom against tyranny. And her role includes defending us against what Pope Benedict calls the dictatorship of relativism.

Right now, in the West, the Church is the only institution left that will defend the family, marriage, and sexual morality — and, as Pope Benedict wrote the past week, the barque of Peter is taking on water, almost capsizing. That’s why the Vatican bureaucrats got mad at Donald Trump’s historic speech in Poland — because he defended Christendom, the Church, the family, and Western civilization more than the Vatican does!

Take a look around you. Who else is?

But wait — what’s wrong with government charity? Are you against social workers?

Well, Mother Teresa once pointed out that her sisters were not social workers. “We worship Christ in the Blessed Sacrament for four hours every morning, and then we go out and find Him all day in the gutters of Calcutta,” she said. “Social workers can’t do that.”

They can’t do that here, either. These days, if a government social worker, school employee, Army chaplain, or physician even mentions Jesus at work, she’s likely to lose her job. Even go to jail.

The government that punishes these simple acts of Christian charity is the same government sanctioned and applauded by bishops who are desperate to keep the federal money flowing to their welfare bureaucracies.

The bishops are in a bind. Their hands are tied by “golden handcuffs” — and alas, their lips are sealed as well.

It’s up to the laity to free them.

This article was originally published in The Wanderer and is re-published with permission of the author.

Reclaiming the safety net: the challenge for social justice Catholics