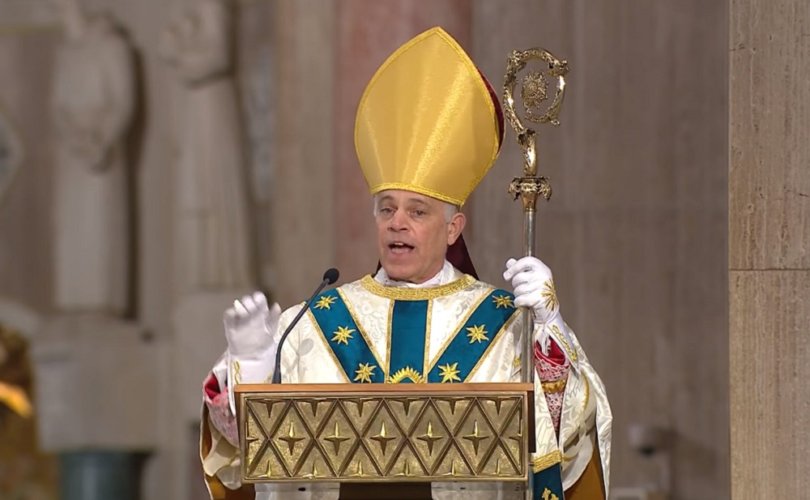 September 25, 2020 (CatholicCulture.org) — As much as I admire Archbishop Salvatore Cordileone for challenging restrictions on the Church in San Francisco…

As fully as I agree with him that the response from city officials — or rather, their failure to make any response — is an insult to Catholics…

Before I go any further let me emphasize that I do not mean to single out Archbishop Cordileone for criticism here. On the contrary, I mean to praise him. The question that I ask of him could apply, far more pointedly, to all the other bishops and priests who have meekly accepted unreasonable restrictions on the administration of the sacraments — to the bishops and priests who have not raised public objections, have not mobilized the faithful, have not organized Eucharistic processions.

Give Archbishop Cordileone full credit for speaking truth to power: for telling the faithful who joined him last Sunday outside the cathedral that city officials “are mocking you, and even worse, they are mocking God.” Credit him, too, for the public campaign that has urged faithful Catholics to call San Francisco’s Mayor London Breed, and has already raised 17,000 signatures on a petition “asking the City of San Francisco to free the Mass.”

But again: Why ask city officials to “free” the Mass? There is only one man who has the rightful authority to restrict and regulate the liturgy of the Catholic Church in San Francisco, and his name is Cordileone. If he wants to celebrate Mass for the public in his cathedral, he can do it.

But wait, you say. He can’t celebrate Mass for the public in his cathedral. It would be against the law.

To which I respond: what law?

Argument #1: Is there an actual piece of legislation, duly enacted by the people’s elected representatives, that prohibits the public celebration of the Eucharist? (Here I am deliberately painting the situation with a broad brush, so that my argument applies not just to San Francisco but to the many other jurisdictions where the Mass has been restricted.) Or is this a regulatory order, issued by a bureaucrat whose authority is at best uncertain? Is it an executive order, issued by a mayor or governor? And if so, are ordinary citizens — who are not employees of the executive — legally bound? Diocesan lawyers should be exploring those questions aggressively.

Argument #2: Even if there is a law, and it does have prima facie validity, is it not a clear violation of our First Amendment guarantee that prohibits not only the establishment of religion, but also “prohibiting the free exercise thereof”? Christians should not be “asking” the government to lift discriminatory restrictions on public worship but demanding our rights, and enlisting legal help to challenge every such restriction.

Argument #3: Even if a legitimate act of legislation is in place, and even if that law survives a Constitutional challenge, it is an unjust law, and the Church teaches that unjust laws do not command our obedience. Indeed the Catechism of the Catholic Church goes further, saying: “The citizen is obliged in conscience not to follow the directives of civil authorities when they are contrary to the demands of the moral order, to the fundamental rights of persons or the teachings of the Gospel.” [emphasis added]

Last Sunday, speaking to the crowd outside the cathedral, Archbishop Cordileone acknowledged that on at least one past occasion he had knowingly violated the law. He explained:

I was aware that I was breaking the law, since it is against the law to provide transportation to an undocumented immigrant. But the highest law is love of God and love of neighbor, and that law has to take precedence over the human-made law of the state when government would ask us to turn our backs on God or our neighbor in need.

Archbishop Cordileone has protested repeatedly that city officials have ignored requests and complaints and pleas and demands from the Catholic Church. Let’s hope, then, that if the archbishop leads the faithful back into the cathedral next Sunday to celebrate the Eucharist, city officials will ignore them once again. The alternative is, I admit, distressing: hundreds of Catholics, including the archbishop, could be jailed. Distressing, but not unprecedented. Over the years countless thousands of Christians have spent time behind bars.

Again, I do not mean to single out Archbishop Cordileone for criticism. He has done far more than his episcopal colleagues to rally the faithful and to vindicate the rights of the Church. What I have said above applies far more forcefully to those bishops who have not challenged unreasonable restrictions on the practice of the faith.

Last week Bishop Michael Burbidge of Arlington, Virginia, issued a letter suggesting that the Covid lockdown had produced a “Pentecost moment” for the faith, encouraging many new initiatives of creative evangelization. Bishop Burbidge, too, obviously intended to encourage these initiatives, to promote the active practice of the faith in a difficult time. In praising new ways of communicating the faith, Bishop Burbidge pointed to St. Paul as “the model of the early Christian communicator.” Of course St. Paul spent time in prison, and eventually was executed by civil authorities. But Bishop Burbidge notes: “The Church grew even when facing the harshest of persecutions.”

Just before citing the example of St. Paul, Bishop Burbidge made another important point about the early Church:

When threatened by authorities to cease preaching in public about the Good News of the Lord, the response of St. Peter and St. John was that to stop communicating was not an option. “It is impossible for us not to speak about what we have seen and heard.” [Acts 4:20]

The apostles didn’t stop celebrating the faith, despite threats of legal punishment. Insofar as they are our models, neither should we.