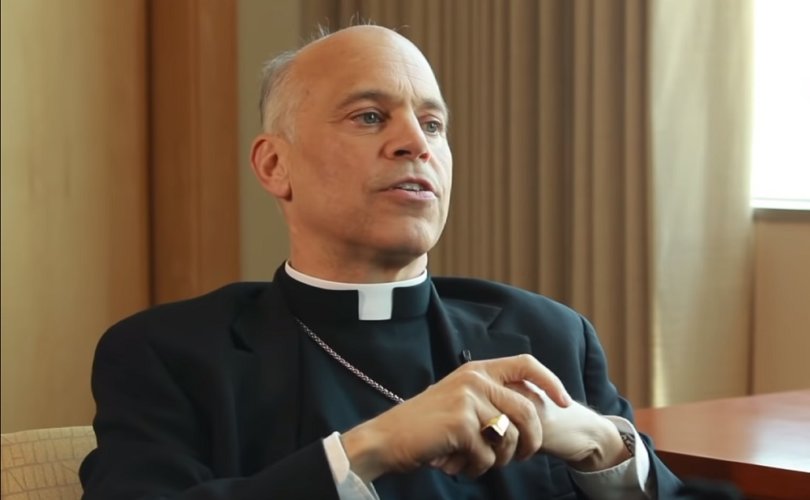 (LifeSiteNews) – Over the past week, the internet has been abuzz with the news that the archbishop of San Francisco, Salvatore Cordileone, wrote a letter to Nancy Pelosi and told her that because of her blatant disregard for Catholic Church teaching regarding abortion and the inherent “grave evil” of her advocacy, she is not to present herself for Communion.

Since then, several other bishops have stated their support of the archbishop’s decision. Sadly, this number is but drop in the bucket considering the number of dioceses and bishops in the US.

For years, I have pondered why more clergy don’t speak out and defend Christ in the Eucharist and why they don’t uphold Canon 915, which says that those “who obstinately persist in manifest grave sin are not to be admitted to Holy Communion.”

When it comes right down to it, I have to wonder if it’s because they lack moral courage — the courage to follow Christ’s and the Church’s teachings regardless of what others might say or do, regardless of any anger generated by these moral actions, and regardless of any harm that might come to one’s reputation or even to one’s bodily self.

Any Catholic in politics who votes for, advocates for, and supports abortion — as Nancy Pelosi, Joe Biden, and others do — is persisting in manifest grave sin. It has long been Church teaching that only those free of mortal sin present themselves to receive the body of Christ. Our perfect Lord deserves nothing less.

Because of these politicians’ unrepentant mortal sins in supporting the murder of preborn children, they are not making themselves worthy of receiving Christ in the Eucharist. It’s that simple.

Yet not three days after the news broke about Archbishop Cordileone barring Pelosi from Communion, she, like a defiant and petulant child, received the body of Christ in another diocese. However, we must remember that she did not do this alone: Someone willingly or out of cowardice gave Christ to her.

Christ — who came here to save us, who taught us, who established our Church, who commissioned the Apostles to continue His work here on Earth, and who died a horrific death for us — broke the bread on that Holy Thursday and told His Apostles “Do this in memory of Me.”

Do this: Eat of My body, drink of My blood. Why? To become a part of Him. To be one with Him. To remember His sacrifice, His gifts, His mercy, and His love.

At every Mass, that bread and wine become Christ’s body and blood. They are not mere symbols. They are Christ. As Catholics, we are so incredibly blessed to witness this miracle. And if we are free from mortal sin, we are even more blessed to receive this miracle.

It is our duty as brothers and sisters in Christ to defend His true presence in the Eucharist and to teach others to do the same. But we can only do so much without strong leaders. And, like those first Church leaders—the Apostles—our leaders must have moral courage.

Yet we must remember that the Apostles didn’t start out having moral courage. It was given by the Holy Spirit on that very first Pentecost. That gift set them on fire to do God’s work. They no longer caved to the fear they felt; they found their strength in Christ. And through their leadership and their moral courage, others became courageous as well.

Those first Christians didn’t get to know Christ on their own. How could they? How can you learn about someone you have no knowledge of? They needed those first Apostles to teach. And then those whom the Apostles taught began to teach others. And on and on it went for over 2,000 years.

Our bishops are successors of those very first Apostles, but the courage of the first Apostles seems to have gotten smothered by political correctness, by woke language, by a fear of “upsetting” people, or maybe even by the failure to understand that Christ is truly present in the Eucharist.

When Christ saw the moneychangers in the synagogue, He became angry. He overturned tables and chased people out because those things didn’t belong there.

Today, we invite all to share in our faith. Indeed, we pray that they do. We want everyone to feel at home in church, for being in the presence of Christ renews and strengthens us. We want everyone to repent of sins, especially public ones. But Our Lord in the Eucharist is so pure, so beautiful, and such a gift that we dare not spit in His face and receive Him into our very selves if we are at the same time telling Him we hold His laws in disdain. We dare not receive Him if we act contrary to His teachings and lead others astray. We dare not receive Him if we advocate for the spilling of the blood of innocents while decrying His innocent blood spilled.

If these politicians truly cared about the Catholic faith and the Eucharist — the source and summit of our faith — they would never present themselves unworthily. They would not use Him. They would not bring the evil they advocate for into God’s house.

So while we must decry the actions of these pro-abortion politicians, we must applaud the actions of the clergy and lay people who have and sustain the moral courage to speak out about this grave sin. We must encourage them to continue leading courageously, despite opposition from a world that becomes angry, that shuns, or that even incites violence.

READ: Bp. Strickland bans Pelosi from Holy Communion until she ‘stops advocating the murder of children’

And we must pray. We pray for the souls of people who publicly state that they are Catholic, yet who clearly act contrary to Catholic teaching. We pray for those who stand in defense of Christ in the Eucharist. And we pray that others have the moral courage to do so as well.

Two thousand years ago, the crowd failed to protect Christ, shouting instead for Barabbas. Today, the world shouts for another evil: abortion “rights.” Let us not allow these shouts to cause us to again fail to protect Christ.