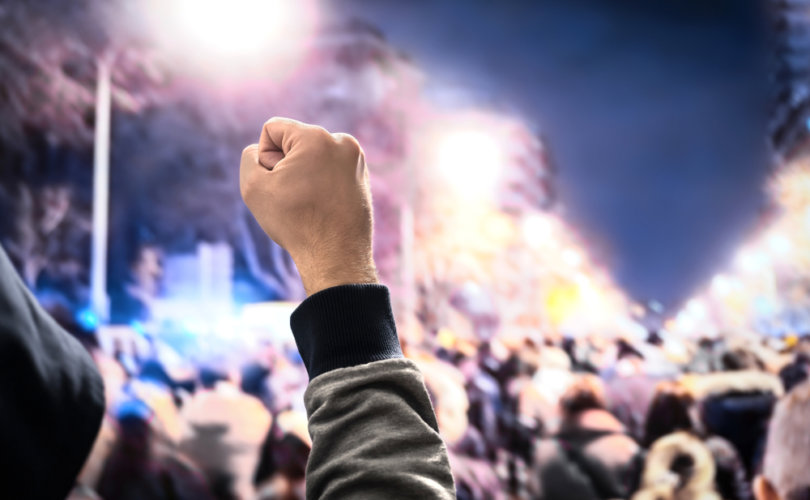 August 18, 2020 (LifeSiteNews) – America is a deeply divided country, raising the question of whether we will continue to be “One nation under God, indivisible, with liberty and justice for all.” Despite the constant mantra that “diversity is our strength,” reality confirms the opposite. Our vitriolic diversity foments hatred and violence, a fact witnessed to many times throughout history. Have we forgotten the genocides of Armenia and Rwanda? At this point in history, our divisions run deep and often ugly. We are Democrat vs. Republican, law and order vs. chaos and rioting, black vs. white, tyranny vs. freedom, etc. Increasingly, disagreements result in “mob” action promoted by “progressive” politicians, liberal courts, and prosecutors who justify and enable rioting and violence both by their words and actions. Organized handlers infiltrate and instigate violent mob action. Police find pallets of bricks, knapsacks with incendiary devices, and other riot gear in strategic locations as they did in Kansas City. They also intercept social media contacts by organizers directing mob movements during riots.

Often, what appears to begin as a “peaceful protest” degenerates into burning, looting, and violence. Intimidation tactics target individuals, both liberals and conservative, often in their own neighborhoods. Some Democrat politicians feel the sting even as they support the mob. Ted Wheeler, mayor of Portland and a supporter of Black Lives Matter, held a “listening session” on the streets.  Surrounded by his security team, Wheeler was jeered, called to resign, and hit with projectiles before withdrawing into a building which the rioters attacked. No doubt he expected a big welcome, but there's no evidence Wheeler learned anything from the encounter. He continues to condemn the presence of federal officers sent to protect the Portland federal courthouse and shaved millions from the police bureau budget and defunded the Gun Violence Reduction Team. The result? Last month the city had the highest number of monthly gun murders in thirty years. So now Wheeler is talking about reestablishing the unit in some form. Reality has a way of intruding on liberal utopian ideas.

At this point, Wheeler’s city, with its months of nightly riots, resembles a war zone. Chicago and New York, where looters and window smashers are closing large chain stores for good, look like the aftermath of Kristallnacht. What's especially shocking is the refusal of liberal prosecutors, judges, and politicians to hold criminals accountable, even announcing that they won't prosecute certain crimes. Under New York City's bail “reform,” it's catch and release. Arrested offenders return to the riots within hours without even posting bail.

The state police in Portland are sick and tired and pulling out. Several days ago, Oregon State Police Spokesman, Captain Timothy R. Fox explained saying, “We’re in a county that’s not going to prosecute this criminal behavior….The Oregon State Police is continually reassessing our resources and the needs of our partner agencies and at this time we are inclined to move those resources back to counties where prosecution of criminal conduct is still a priority.”

It's hard to blame the police for this decision. Hundreds of officers all over the country have been injured and some even killed during the civil unrest. Why endanger police officers' lives when liberal politicians give rioters a free pass? Of course, the big losers are law-abiding citizens and small business owners who invested in once-thriving cities only to lose everything to the looters, a few even their lives.

Chicago, once under the thumb of gangsters like Al Capone, has new mob bosses, Marxist overlords with their mob strategy.  Individuals, who normally exhibit moral behavior become tools when gathered en masse and stirred up by trained organizers. Critical thinking and common sense often disappear. When that happens, the crowd no longer acts as a loose group of individuals, thinking independently, but like a swarm of “killer” bees attacking a perceived threat to “the hive.”

In his 1896 work, The Crowd: A Study of the Popular Mind, Gustave Le Bon wrote, “The substitution of the unconscious action of crowds for the conscious activity of individuals is one of the principal characteristics of the present age.” Le Bon witnessed the radical socialist Paris Commune uprising of 1871 which helped form his theories on mob behavior. He stressed that, while the group may include intelligent individuals, as a crowd they show “mental inferiority” and a failure to think. He could have been writing about the United States today:

Little adapted to reasoning, crowds…are quick to act. As the result of their present organization their strength has become immense. The dogmas whose birth we are witnessing will soon have the force of the old dogmas; that is to say, the tyrannical and sovereign force of being above discussion…. Certainly, it is possible that the advent to power of the masses marks one of the last stages of Western civilization, a complete return to those periods of confused anarchy which seem always destined to precede the birth of every new society.

Le Bon, one of the first to study mob psychology, warns of the destructive nature of “the crowd” and the “new society” it may introduce:

Crowds are only powerful for destruction. Their rule is always tantamount to a barbarian phase. A civilization involves fixed rules, discipline, a passing from the instinctive to the rational state, forethought for the future, an elevated degree of culture — all of them conditions that crowds, left to themselves, have invariably shown themselves incapable of realizing. In consequence of the purely destructive nature of their power crowds act like those microbes which hasten the dissolution of enfeebled or dead bodies. When the structure of a civilization is rotten, it is always the masses that bring about its downfall….. [A]mong the special characteristics of crowds there are several — such as impulsiveness, irritability, incapacity to reason, the absence of judgment and of the critical spirit, the exaggeration of the sentiments.

In our own society, which sadly exhibits signs of a rotting civilization, the psychology of the crowd (the mob) is easily seen in numerous protests since the 1960s. Black Lives Matter demonstrations are only the most recent example. Le Bon points out that in these situations, rational thinking often gives way to emotion-laden mob psychology. Critical thinking and common sense drown in a sea of misinformation, hostility, and media manipulation. What are the facts? What is fiction? Do protesters even care? Le Bon also points out the mob need not be geographically together, a fact more relevant in the internet age than in his own time. Consider “flash mob” events, the “Twitter revolution,” and mob actions arranged by smartphone.

Those participating in the mob often don’t seem to know why they protest. They simply coalesce into a frenzy of hate using it as an excuse to loot and burn businesses – ironically even those corporations that support them. While they scream about love, they assault those with whom they disagree and destroy property indiscriminately, actions they would likely avoid as individuals. Their behavior exhibits exactly the kind of manipulation described by Le Bon who says the crowd:

…is a servile flock that is incapable of ever doing without a master. The leader has most often started as one of the led. He has himself been hypnotized by the idea, whose apostle he has since become…. The leaders we speak of are more frequently men of action than thinkers….However absurd may be the idea they uphold or the goal they pursue, their convictions are so strong that all reasoning is lost upon them.

Most disheartening for Catholics is to see members of the U.S. hierarchy encourage the mob. Remember the bishops who summarily condemned the Covington students of racism based on a short video clip the mainstream media used to distort the truth. The students’ own bishop and school administration as well as many other bishops and even the March for Life piled on. Those who rushed to judge the boys essentially acted as an internet mob.

Bishop Mark Seitz of El Paso who knelt with some of his clergy holding a “Black Lives Matter” sign and D.C. Archbishop Wilton Gregory who instructed his priests to protest President Trump wearing cassocks or black clerics also exhibited mob behavior. Unfortunately, they are not alone among our shepherds. And, in fact, the Catholic bishops' organization, the U.S. Conference of Catholic Bishops (USCCB), often joins the latest politically correct mob on issues like the environment, climate change, immigration, and economics. While these issues have underlying moral implications related to good stewardship and civic responsibility, the bishops have no particular expertise to solve any of them. Solutions are a matter of prudential judgments which can differ. In these matters, solutions are the responsibility of the laity. They also differ in kind from murder, abortion, contraception, fornication, same-sex “marriage” and homosexual activity, all of which are intrinsically gravely immoral and always to be condemned.

Mobs take many forms and political “hives” are among the worst. The Democrats’ unprincipled assault on Robert Bork’s nomination to the Supreme Court, led by Ted Kennedy and Joe Biden is a case in point. Their successful hit job led to Merriam Webster introducing the verb “to bork” into the English language. The definition: “to attack or defeat (a nominee or candidate for public office) unfairly through an organized campaign of harsh public criticism or vilification.” In other words, to engage in mob action.

With the help of their cronies in the press, the Democrat mob attempted to “bork” Clarence Thomas’ appointment to the Supreme Court as well. Thomas in a manly counterattack described their efforts accurately as a “high tech lynching” and fought back vigorously. Fortunately for Americans, he won that fight and remains the most reasonable voice on the court. As a daily Communicant, he models Catholic action in the marketplace. It's worth noting that Democrats, Vice Presidential nominee Kamala Harris among them, used the same immoral strategy during the Brett Kavanaugh nomination. Again they failed, indicating the particular mob strategy of falsely accusing Supreme Court nominees of being sexual predators with no evidence may be wearing thin.

Sadly, many among the mob resist all efforts encouraging them to think critically, separate from the hive. But, if one flies alone, he may be rebranded as an individual. Our job as Catholics is to attract people with the honey of truth. We’ve seen abortionists and abortion workers like Bernard Nathanson, Norma McCorvey, and Abby Johnson convert and become pro-life warriors. We've seen liberals, like those joining the “walk away movement,” shed the perverse ideals of the Democrats and walk away from a party whose platform embraces evils of all kinds.

There is no reason to despair, despite the bleak landscape.  With the help of God, and prayers for common sense, it’s possible to convert the mob one beloved child of God at a time. But to do that, Catholics need to throw off the temptation to remain in the “silent” hive that embraces peace at any price. We must be willing to accept persecution, which is guaranteed remembering the beatitude “Blessed are they that suffer persecution for justice's sake: for theirs is the kingdom of heaven.” The war may be bloody, but the ultimate victory is guaranteed as long as we fight under the banner of the two hearts, the Sacred Heart of Jesus and the Immaculate Heart of Mary.