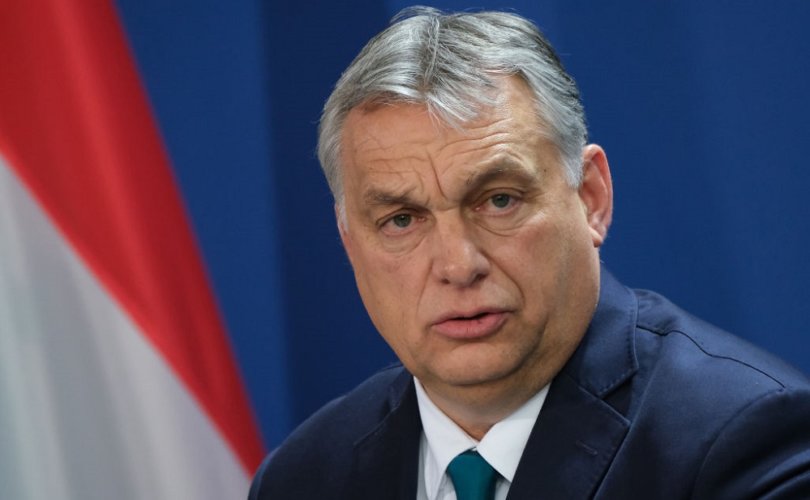 (LifeSiteNews) – The European Commission voted last week to freeze 11.5 billion euros in aid to Hungary. This latest development in the EU’s struggle with the central European nation falls short of the expected invocation of Article Seven, a mechanism invented to allow member states whose policies disagree with the values of the EU to be sanctioned and deprived of their voting rights, against Viktor Orban’s government.

The EU maintains that there are issues with the rule of law in Hungary which must be addressed, objections which arose following long standing criticism of the pro-family and anti-illegal migration polices pursued by Fidesz, Hungary’s ruling party.

To resolve the deadlock, Prime Minister Viktor Orban has agreed to implement a list of 17 reforms designed to assuage the concerns of the EU. In a revealing interview given in Berlin, Orban gave a frank appraisal of the real dimension of this disagreement, which demonstrates how and why it has resulted in near deadlock. His perceptions foreshadow both the standoff with the EU as well as its causes and consequences.

It is not about reforms, he says, “it’s blackmail, pure and simple.”

The issue cannot realistically be resolved, as Orban contended in October that has nothing to do with the official objections the EU has lodged concerning legal reform in Hungary. It is rooted in policies such as the Hungarian Child Protection act, and the government’s action to prevent mass illegal immigration.

When asked whether he had been privately approached with the suggestion that he drop his party’s policies on NGOs, immigration, and child protection, Orban replied it was an open secret that these were the real reasons for the EU’s treatment of Hungary,

“This is a purely political question…This is done quite openly. The EU has never left us in any doubt: if we behaved like the others, we wouldn’t have problems with EU funds.”

Orban explained that the governing parties in Hungary – and in Poland – are political outsiders in the EU, where there are “…three large, closely cooperating party families: the Socialists, the People’s Party and the Liberals. The main governing parties in Hungary and Poland don’t belong to any of these three-party families, which are therefore given a free hand to take punitive measures against Hungary and Poland.”

He concluded that since Hungary and Poland present rivalling political programmes they are being punished and blackmailed with EU money, for which there is no legal basis at all. The EU, of course, maintains that the suspension of funding to Hungary is because of its (alleged) undermining of the rule of law, bringing a grand irony to these proceedings. How then can things proceed like this?

RELATED: The EU is holding Hungary hostage because it won’t submit to its LGBT ‘values’

— Article continues below Petition —
URGENT: Say No to the UK introducing a “right” to abortion
Show Petition Text
10631 have signed the petition.
Let's get to 12500!
Thank you for signing this petition!
Add your signature:
Show Petition Text

Orban cites the example of Poland, saying that their previous compliance with EU demands simply led to more demands being made. Why would the EU behave in this way?

“Clearly this is about forcing a change of government in Poland. Ultimately this may also be the objective with regard to Hungary.”

Orban remarked that whereas there is an election in Poland in 2023, there will be none in Hungary for another four years. This signals the likely shape of future events, he concluded, “Now we’re dealing with seventeen demands. We’ll meet them all. But right after that, I bet there will be an eighteenth, a nineteenth, and so on…”

His prediction was confirmed as truth in an EU statement on December 5th,

“Progress has been made by the Hungarian authorities, it should be noted,” a French treasury official said. “A certain number of reforms have been undertaken — there are still additional elements that are expected.”

Orban nevertheless remained confident in October that the EU would release the funds by the end of the year.

“If this doesn’t happen, it would lead to a series of unforeseeable conflicts,” he remarked.

The funds have been delayed again, and one such conflict has broken out already, with Hungary following the freezing of its EU billions with a veto on a 18 billion euro aid package to Ukraine. The EU finance ministers have responded by making Hungary’s EU funds conditional on their support for the Ukraine package, with additional demands on tax policy.

This dispute is concretizing divisions in the EU which may become irreparable. The EU cannot maintain its claim tthat it defends pluralism if it continues to punish member states whose policies it dislikes. Nor can it assert its legitimacy as a stable vehicle for the leadership of member nations when its energy policies would be devastating.

With Hungary at present exempt from the Russian oil price cap, the ninth round of EU sanctions under discussion threaten a major rift. A complete embargo on Russian gas and oil is mooted, which Orban maintains would destroy his country if implemented. Together with the objection of Orban’s government to the EU deciding on member nation’s tax policies, this dispute takes on the dimension of an argument over national sovereignty.

Speaking of the EU’s demand to implement Joe Biden’s faltering global minimum corporation tax, the prime minister said, “The tax issue is not a global one – it falls under national jurisdiction”.

The EU has decided that Hungary will not receive its funds if it does not agree to this tax policy, and to billions more in aid for Ukraine. However, Orban has objected that “…such a measure would burden our children and even grandchildren and compel us to pay the share of states that might go bankrupt in the meantime.”

The question framed by Hungary in its fractious relations with the EU is this: do governments decide what happens in your nation, or do bureaucrats in Brussels? On tax, on family and immigration policies, and on issues of vital national security such as energy the EU demands compliance with its own goals, which clearly serve its own ideology at the expense of Europeans.

What Orban proposes is peace. “We would not like the EU to become a community of jointly indebted states” he said. His government refuses to change its policies on migration, on ‘allowing sexual propaganda in schools’ and will not agree to further sanctions on Russia.

In refusing to be told what to think, say, and do in his own nation, Orban has revealed the iron fist in the rainbow glove of the EU. This is a power struggle, rooted in competing claims on what is politically and morally right, reaching into the question of who is really in charge. It casts a long shadow over the claims of democratic values which are claimed to be at the core of the European Union, whose power to dictate to nations may be permanently undermined by the nature of its unreasonable – even ruinous – demands.

This is a battle between the progressive ideology of the EU and the Hungarian national interest. One nation is punished for the defence of traditional family values, the crime of securing its own borders, and for the sensible scrutiny of foreign-sponsored organizations working for regime change in tandem with the European Union, an organization that will settle for nothing less than complete submission. In choosing to impose values and policies equivalent to national decline, the EU has picked a fight with reality it cannot win.