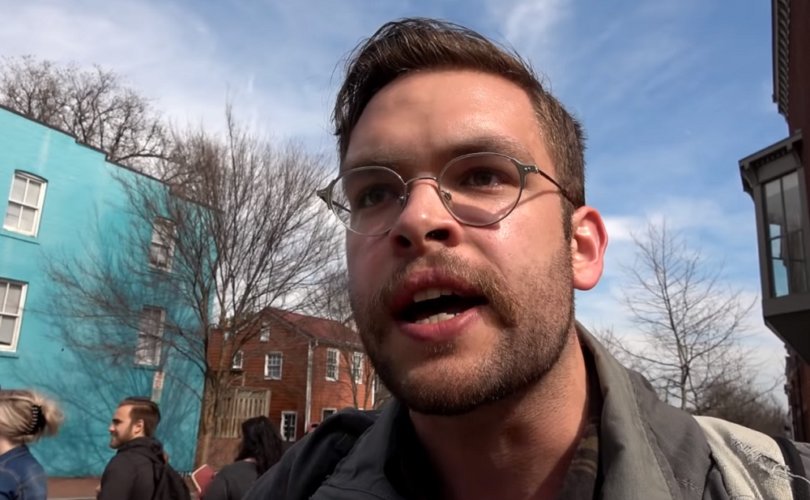 March 11, 2020 (TFP Student Action) — For students at Georgetown University, March 2 was like any other Monday. Some hurried through the Healy Gate on their way to class, others leisurely enjoyed the sunny day in Washington, D.C. However, the humdrum monotony soon vanished.

TFP Student Action volunteers arrived. This time, a contingent of enthusiastic high school seniors from the St. Louis de Montfort Academy joined them. Standing near Healy Gate, they set up their banner: “Pray and act to end the sin of abortion.”

As always, the campaign started with a prayer. Then the young volunteers politely shared 10 Reasons to Protect the Unborn leaflets with students, while others held signs encouraging passing cars to “honk” for the unborn.

Would students at the oldest Catholic university in America be receptive to the cause of the unborn? Would they welcome peaceful fellow Catholics in prayer to end abortion?

Almost immediately, a student yelled, “I like killing babies.” A group of feminists gathered to mock and laugh hysterically for about 30 minutes. One approached TFP volunteer Gregory Murphy and said, “You should be out here defending women’s rights.” Gregory was quick to reply: “We’re here standing up for the rights of all women no matter how small.”

The hostility only increased as a crowd of jeering pro-abortion students formed on the sidewalk across the street. Their ringleader was a self-proclaimed “indigenous” man who shouted blasphemies against the Virgin Mary, using lewd language against the Catholic Church and TFP volunteers who calmly prayed the rosary.

“You are killing people…” insisted an irate pro-abortion advocate, ironically ignoring the fact that more than 60 million unborn babies have been killed by surgical abortions in America since 1973. “We are beyond a civilized debate,” he shouted.

TFP volunteers continued to pray. It seemed like the best response. At this point, the spiritual aspect of the campaign became apparent. On one side, the pro-abortion and pro-homosexual activists united in their hatred for purity, the unborn and Catholic morality. On the other side of the street, a handful of young men stood united in their love for purity, eager to follow the teachings of the Catholic Church, fighting for the God-given right to life. What an extreme and vivid contrast.

This clash of ideas was tangible. With the recitation of the rosary underway, the pro-abortion side became very agitated. It was like holy water on the devil. “You’re weaponizing the rosary,” shrieked one. Others attacked prayer.

Infuriated, one pro-abortion student urged passing cars to run over the pro-life volunteers. Two enraged women driving a moped zipped past two TFP volunteers, only inches away from running them over.

Looking at the majestic TFP standard, a student sneered, “you’re so medieval.” “Thank you. That’s a compliment,” replied a volunteer much to the man’s astonishment. Indeed, modern society would benefit from the principles of the Gospel that sustained Medieval Christendom, which brought about so much authentic progress in education, healthcare, architecture, agriculture, and above all, virtue, sainthood and Faith.

The TFP campaign at Georgetown ended just as it had started, with a prayer.

The pro-abortion side responded by chanting what Nietzsche once said, “God is dead! God is dead!”

Well, the fact is Nietzsche has been dead for 120 years. And God is eternal. Yes, God’s grace continues to live in the hearts and souls of more and more young Americans who not only yearn but also fight for the day when the sin of abortion will be abolished forever in our beloved land.

May God hear our prayer and hasten the day when we can truly be one nation under God — a nation without the sin of abortion.

Our Lady of Victory, pray for us!