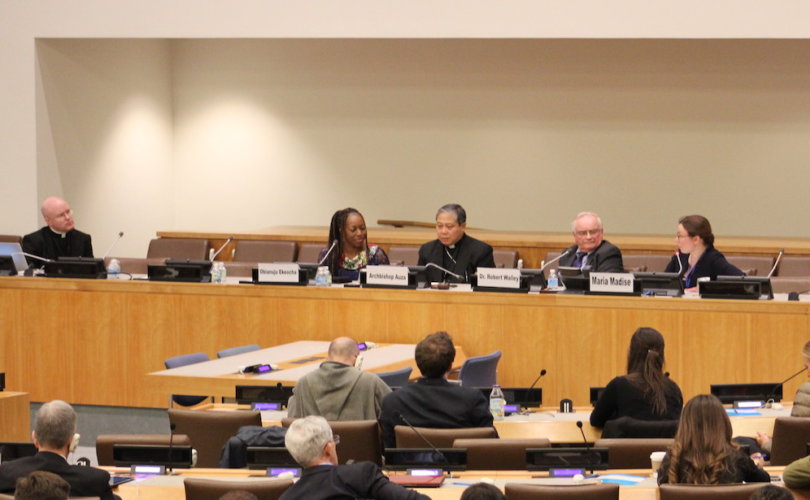 Pro-life leaders speak at a UN panel hosted by the Vatican.

March 29, 2016 (European Life Network) — The 60th session of the UN Commission on the Status of Women took place at UN headquarters in New York from March 14 to March 24, finishing around 11.00PM on Holy Thursday. There has always been bias against pro-life and pro-family NGOs at the UN; however this year’s session contained a new and pernicious level of bias, not previously experienced by pro-life and pro-family NGOs.

This new level of bias first showed its ugly head in the preparations for the session when the pro-life and family NGOs applied for parallel events and were told that only one event would be allowed per organization and then were either refused outright or given slots on the most unsuitable dates and times. Contrast that with the slots, times, dates and numbers of events given to pro-abortion organizations, many of which were given multiple slots for their parallel events, together with more appropriate dates and times. Radical feminist organizations such as the Asian-Pacific Resource and Research Centre for Women (ARROW) for example were given approval for three events – March 15, 2:30 pm, March 21, 10:30 am, March 21 4:30 pm, while the Association for Women's Rights in Development (AWID) were given 6 events – March 16 8:30 am, March 16 12:30 pm, March 17 6:15 pm, March 21 10:30 am, March 21 4:30 pm, and March 24 2:30 pm.

Second, the CSW approved NGO committee issued a publication for NGOs condemning what they describe as negativity and yes, you have guessed it, negativity consists of the pro-life and family agenda. The following is an extract from the publication, “NGOs and Women’s Human Rights Activists at the UN and CSW,” which on page 23 sets out some of the so called negative trends that in the view of the committee have impeded their progress:

• Dissent between pro-life and pro-choice groups

• Opposition to Sexual and Reproductive Health and Rights, in particular sexual rights

• Opposition to “sexual orientation and gender identity” or (SOGI)

• Opposition to “diverse forms of families”

Thirdly, and perhaps more serious than the other problems, was that a new level of inflexibility entered into the inter-governmental negotiations and despite strong representations from many pro-life NGOs, the CSW outcome document, Women’s Empowerment and the Link to Sustainable Development, (Draft) Agreed Conclusions, contains language aimed at increasing access to contraception and abortion and teaching children inappropriate so-called comprehensive sexuality education. The health paragraph also includes a reference to controversial sexual rights.