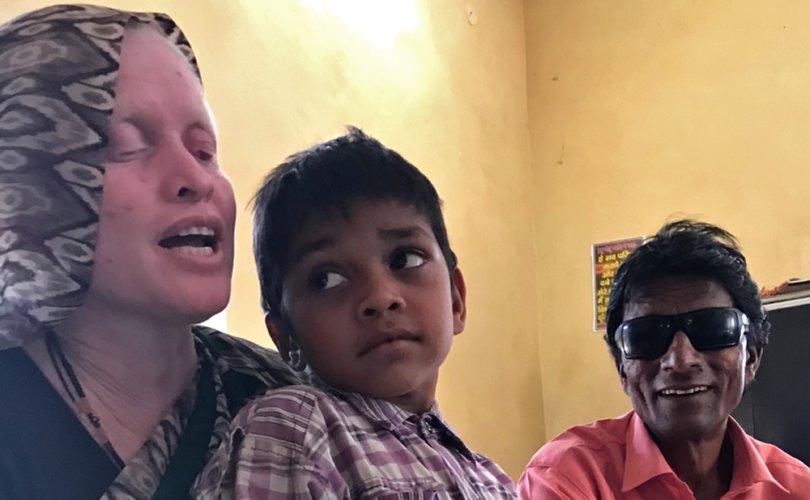 Ruben with his blind parents.ADF International

October 29, 2018 (LifeSiteNews) – They lived in a village on the rural plains of the Indian state of Madhya Pradesh. The family consisted of a six-year-old boy, Ruben, and his two parents.

They were unusual for two reasons.

Firstly, the family is Christian in a land that is predominately Hindu.

Secondly, both mother and father are blind. Ruben’s mother lost her sight when she was a child, and his father, a Christian pastor, has been blind from birth.

They were unusual in another regard. Ruben’s father, although blind, was an active and committed preacher of the Gospel. Often of an evening, small groups of Christians would gather at the family home. There they would pray – for each other and the world around them – they would read the Bible and sing hymns rejoicing in the faith they had been given.

One night all this ended. A group of men arrived at the home when just such a Christian gathering was taking place. The men started to attack the assembled Christians. The attackers targeted Ruben’s parents in particular.

Then the family was taken to a local police station, where more humiliation was in store for them. Not only were the couple beaten again, but Ruben’s mother was stripped naked in front of her son. She could not see the fear and pain in her son’s eyes; she didn’t need to. Eventually, the whole family was cast into prison to await trial.

In India’s today, this is not an isolated incident—nor is it confined to small communities of Evangelical Christians. It is something increasingly happening right across India. Often it happens like this: firstly, the aggressors attack and physically assault Christian believers. Then they drag their victims to the police and accuse them of having tried to forcefully convert someone, anyone. The police, especially in remote areas, tend to side with the aggressors.

Although Christians are a small minority, representing less than three per cent of the population (approximately 28 million souls), Christians trace their spiritual lineage back to Saint Thomas and the start of Christianity. During the last two thousand years, they have been a small but vital part of Indian society. Christians contribute in many important ways to that society today. The Catholic Church alone has more than 30,000 educational institutions and 100,000 hospital beds in her care. For centuries there has been little religious violence between Christians and any other religious group in the Sub-continent. So why is this happening now?

One reason is that the nationalist Hindutva ideology has taken root. In recent years, its devotees have become more fanatical than ever in their desire to purge Mother India of all non-Hindu religions. Though such ideas are not new, since the Barathiya Janata Party (BJP) came to power in 2014 with its current Prime Minister Narendra Modi, these ideas have gained wider appeal and acceptance. Pandering to this new intolerance, Indian politicians openly announce that now is the time to champion the rights of the majority over any minority. As Bishop Theodore Mascarenhas, General Secretary of the Catholic Bishop’s Conference of India, says:  “They are using false accusations to incite hate. And nobody in their party or in the government is revoking their problematic statements.”

As the national elections, due in India next year, come into focus, it appears the political rhetoric has intensified even more. Already Muslims are stigmatized as “terrorists”; Christians are portrayed as an even greater threat on account of their daring to share the Gospel.

According to the Indian Government own statistics from the National Crime Records Bureau: in 2016 there were 475 cases relating to offences promoting hostility between different groups on the basis of religion. This is an increase of over 41 per cent compared to 2014. Other research has produced similar results, for example, the Pew Research Center’s 2015 Religious Restrictions Report lists India among one of the countries with some of the worst restrictions on religious freedom.

In recent years, India has experienced a political push for even stricter anti-conversion laws, making it almost impossible to convert to Christianity. While the first of these laws dates back to 1961, there are now eight Indian states that have introduced so-called “religious freedom acts”. Some require the convert and his sponsor not only to inform the authorities of what is taking place, but, in addition, any Christian pastor or priest has to ask government officials for permission before baptizing a convert. There are risks involved in making official any such conversion, however. Several pastors and priests have faced criminal investigations for “forceful conversion” after having asked permission from Indian authorities. Thereafter, converts and their church leaders can become targets of mob violence and other forms of harassment for this action.

“They separated us from my husband, stripped me and my boy naked,” Ruben’s mother recalled, “and then they beat us again and again.” The family was kept in jail for three days and three nights until they were released on bail.

Tehmina Arora, a human rights lawyer and legal consultant to ADF International, took up the family’s case. Sadly, she is all too familiar with these types of cases.  “Nobody should be persecuted because of his or her faith,” she says. ‘The Indian constitution grants the right to religious freedom. Everybody is free to practice their religion. But we cannot take it for granted any longer. We have to fight for this right. In too many states it has already become undermined by anti-conversion laws.”

Despite the mounting campaign against her work, Ms. Arora believes that not all is lost. Together with her legal team, she has won over 200 cases on behalf of falsely accused Christians: priests, nuns, pastors, and laypeople. In addition, in May 2018, a court was forced to grant compensation to Christian families who suffered from anti-religious violence during the 2008 Kandhamal riots in Odisha. It took ten years for this compensation to be awarded but justice was done, as well as a long overdue recognition of those who had lost loved ones.

Thankfully, both Reuben’s father and mother were acquitted in court in June 2018.

Today, however, Ruben smiles less than he once did. Noticeably, he stays close to his parents, especially his mother.

Seventy years ago the Universal Declaration of Human Rights was adopted by the United Nations General Assembly. That Declaration affirms the fundamental understanding that human rights are based on the inherent dignity of each person.

Everyone has the right to freedom of thought, conscience, and religion.

That Declaration is as true today as it was in 1948. It is also needed more than ever by the likes of Ruben and his parents. According to Article 18 of the Declaration, they and their fellow Christian should have the same freedom to live their faith “in teaching, practice, worship and observance” as anyone else, simply by being part of the human family.

Today, you can add your voice to growing campaign to remind all governments of the need to uphold the Geneva Statement on Human Rights by going to: www.ImHumanRight.org