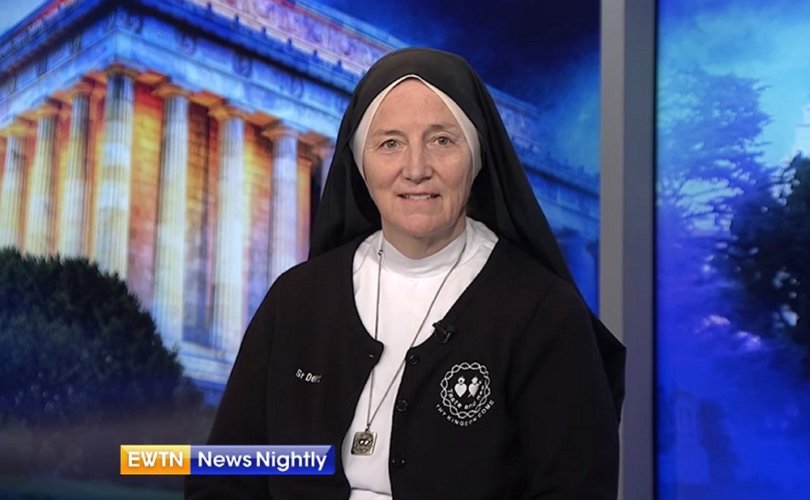 August 31, 2020 (CatholicCulture.org) — Sister Deirdre Byrne is a formidable woman, and her speech to the Republican convention has — obviously and understandably — energized President Trump’s Catholic supporters. What I found most impressive, however, was not her endorsement of the President’s re-election bid, but her bold proclamation:

…I am not just pro-life, I am pro–eternal life. I want all of us to end up in heaven together someday.

Coincidentally, on the morning after Sister Deirdre’s speech, a post on The Catholic Thing featured a photo of another woman religious. I’ll let the photo caption speak for itself:

Image: St. Donato Parish School: First Grade, 1949 [Philadelphia Archdiocesan Historical Research Center]. Mother Gennara, M.S.C, who taught at St. Donato’s for thirty years, is pictured with her ninety-two first-graders. The school’s dedication in 1914 had been attended by Mother Cabrini, founder of the Missionary Sisters of the Sacred Heart and the first U.S. citizen to be canonized (1946).

Ninety-two first-graders! And she managed such classrooms for 30 years! I know nothing more about Mother Gennara, but I feel sure that she, too, was a formidable woman. Moreover I am confident that she shared Sister Deirdre’s ambition.

The nuns who taught me in grammar school were by no means perfect. Some were eccentric. (And you don’t think there are eccentric teachers in public schools?) Few were prepared for the hurricane of radical change that would sweep through their religious community just a few years later, leaving it in ruins. It has been years, now, since I spoke with a member of the Sisters of St. Joseph, and on those rare occasions when I hear about the order’s current programs, I do not recognize the spirit that prompted hundreds of good women to dedicate their lives to teaching.

Whatever their weaknesses at the time, and whatever happened to them later, the nuns who taught my grammar-school class (of 52 students) also adhered to Sister Deirdre’s vision. There was never any doubt in my mind — because the sisters reminded us often — that they wanted all of us, their students, to go to heaven; and that they saw their teaching mission as their own way to get there.

As compensation for their work, these sisters received room and board and an annual invitation to a Red Sox game — and not much more, other than gratitude and grace. Because of their dedication, parochial schools were sustainable; middle-class families could easily afford the tuition and needier families could be subsidized. The system wasn’t perfect, but it was sustainable, as long as the active religious orders were involved.

These were simpler days, of course. No one worried about the security of the school building. There were no armed guards outside, nor video monitors in the hallways. We impressionable young students worried more about nuclear war (I vividly remember the tension during the Cuban missile crisis) than about the then-unimaginable possibility that a crazed gunman would break into the school. Still, to this day I have complete confidence that if a homicidal gunman had walked into any classroom in St. Mary’s School, he would not have reached the students until he killed the teacher first.

When I made that observation to a friend this week, he reminded me of the horrible fire that killed 93 students at Our Lady of the Angels School in Chicago in 1958. An account of that tragedy is tough to read. The school building was not adequately prepared for a fire. But when it came, the Sisters of Charity who ran the school were heroic. Not some of them; all of them. Three sister perished, and one was badly burned, in four of the five classrooms where students died. In the fifth, a quick-thinking nun engineered an escape route, and refused to leave until she thought (sadly, she was mistaken) that all her students were safe.

Maybe members of Chicago’s public-school teachers’ union would be equally heroic today. Maybe all teachers would put their own lives at risk without a second thought to save the children under their care. But I cannot say that I have the same confidence that I had in my own grade-school days. When I hear teachers demand that the schools be shut down because they fear contracting a virus — because they see the little children as a threat to their health — I wonder.