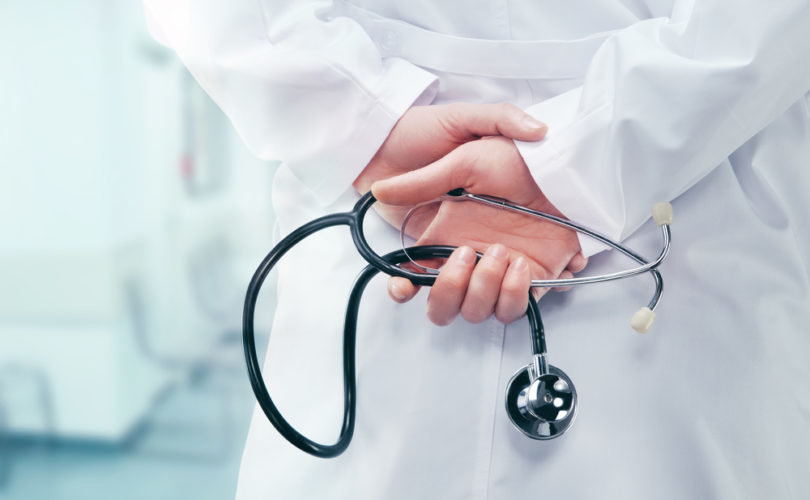 December 21, 2015 (MassResistance) – The cave-in at the major Boston Harvard-affiliated hospital is complete. The Board of Directors of Beth Israel Deaconess Medical Center (BIDMC) has formally notified Dr. Paul Church that they are upholding his expulsion from the hospital and that his medical privileges there are terminated.

His crime? As MassResistance has reported, Dr. Church, a urologist who is also on the Harvard Medical School faculty, voiced concerns to his colleagues about the hospital's aggressive promotion of LGBT activities. He pointed out the long list of serious medical risks — and also moral issues — associated with those behaviors.

The hospital never disputed the truth of Dr. Church's statements. Nor did they claim that he ever discussed this with patients or treated them differently. Instead, the hospital took extraordinary steps first to silence him and then to expel him on a ludicrous charge of making “offensive” remarks. Over months of hearings and appeals, the hospital wouldn't relent.

But Dr. Church would not compromise the truth. Last Thursday he issued this statement:

On December 8, 2015, my final appeal battle at Beth Israel Deaconess Medical Center (BIDMC) ended with a judgment by the Board of Directors to uphold previous decisions and revoke my appointment as a member of the medical staff after 28 years. This concludes a dispute with the administration spanning more than 10 years involving the aggressive institutional endorsements and annual promotions surrounding lesbian, gay, bisexual, and transgender activities within and outside the medical center, including the vulgar Boston Pride parade, to the exclusion of medical facts and traditional values.

Speaking out for staff and employees that find these promotions objectionable and inappropriate for a healthcare institution, I have challenged the medical center to be more truthful and honest about the negative health consequences inherent with high risk and unhealthy sexual behaviors and to be more respectful of the diversity of religious and moral views regarding homosexuality.

In presenting medical facts and Biblical truths criticizing these policies and the obvious contradictions to the higher mission of the medical center to protect the public welfare and promote healthy, moral choices, it was never my intention to offend or attack any individuals personally. Nevertheless, my objections were unfortunately characterized as “offensive” to some members of the BIDMC community, and this became the focus of repeated investigations and efforts to expel me from the staff, instead of addressing the merits of the objections and the criticism itself.

Over the years, BIDMC became more aggressive about efforts to silence these concerns, even resorting to the creation of a special “gag order” in 2011 designed to silence the expression of my concerns within the medical center. This past year a team of Boston lawyers hired by the medical center accused me of violations of the “gag order” and hospital bylaws in their case to have my staff appointment revoked.

Rather than resign as BIDMC initially requested, I engaged in the internal appeals process with help from my legal team from Liberty Counsel. I hoped to show BIDMC policy-makers the ultimate issues at stake and the hypocrisy of a one-sided definition of “offensive” that ignores both medical facts and religious and moral convictions. In its decision to expel me from the medical staff, it is evident that BIDMC no longer has room for the open, honest, and respectful discussion of medical issues or personal beliefs, nor a true fidelity to its stated mission of promoting healthy choices and lifestyles. Instead, it has chosen the path of political correctness and the promotion of a social agenda unrelated to the practice of medicine or the advancement of healthcare and the public welfare.

Despite an outpouring of public support, the Board of Directors was unwilling to address the real issues here. Voicing medical facts, religious convictions, or traditional morality is now apparently punishable by dismissal if a member of the staff claims to be offended by such views. While I am deeply disappointed in the outcome from these decisions, I feel that we have fought “the good fight” and brought these valid concerns into the spotlight of the public arena. I am grateful for the high level of support from social conservatives, people of faith, and organizations dedicated to traditional values. Many have written letters, emailed, demonstrated, and signed petitions in my behalf and for the cause of holding healthcare institutions to the higher standard of protecting the public welfare.

I end my long affiliation with BIDMC with sincere regrets that the administration and Directors have departed from the institution's higher mission and calling in favor of following a highly controversial social agenda. I do value the many personal and professional relationships fostered there over many years. For my part, I intend to continue my medical practice elsewhere and will continue to fulfill my responsibility as a doctor by advocating for healthy and moral choices.

Dr. Paul Church is a true American hero. He is as fearless and principled as anyone we've ever met.

Unfortunately, the ramifications from the BIDMC dismissal may extend and spread to Dr. Church's other hospital appointments in Boston, limiting his ability to continue his work and career as a urologist. This mentality is pervasive in hospital staff credentialing, making it hard to get a fair shake for maintaining staff privileges or joining new medical facilities.

The numbers of large hospitals that are becoming involved with and supportive of the LGBT movement is truly frightening. The medical profession and public health have become seriously compromised. The hospital expended enormous time and money — hearings, special committees, trials, etc. — in their crusade to punish one man who didn't do anything that affected patients, but merely told the truth to colleagues. But Dr. Church has said that none of this will intimidate him from speaking out publicly on this very critical issue.

For us: A fight worth fighting

It's very interesting that the Board of Directors took over two months to announce their decision. The appeals leading up to it gave them a pretty clear set of facts to work with. Could it be that the protests and leafletting outside of hospital made them a little jittery? Or the nearly ten thousand signed petitions from over 70 countries that were hand-delivered to the Chairman and the President? Or the calling and emailing to the hospital's corporate offices from across America? We think it did. But the fight needs to be stepped up even more!

What should people do now?

What has happened to Dr. Church should be a warning to us all. Public health, your health, is being hijacked by political correctness. And as Dr. Church told his colleagues at BIDMC, “Truly caring for the well-being of individuals requires telling them the truth about their choices. The hospital does this on less controversial issues such as smoking and diet.”

First of all, there should be a thousand more like Dr. Church. How many pro-familly conservatives cower and hide when these issues come up at work, or even in social settings? Far too many. Until people stop being afraid, this will continue.

Second, have you noticed that through months of this outrageous situation at a major hospital none of the mainstream media has covered this? Both major Boston newspapers initially had a reporter looking into this, only to have it “killed” by someone higher up. Not even Boston's “conservative” talk radio station, WRKO-AM, would touch it. (We called Jeff Kuhner's show and they kept dodging it.) Thankfully, the national conservative media has covered this.) Call your local radio talk show. Talk this up. Don't let this be ignored.