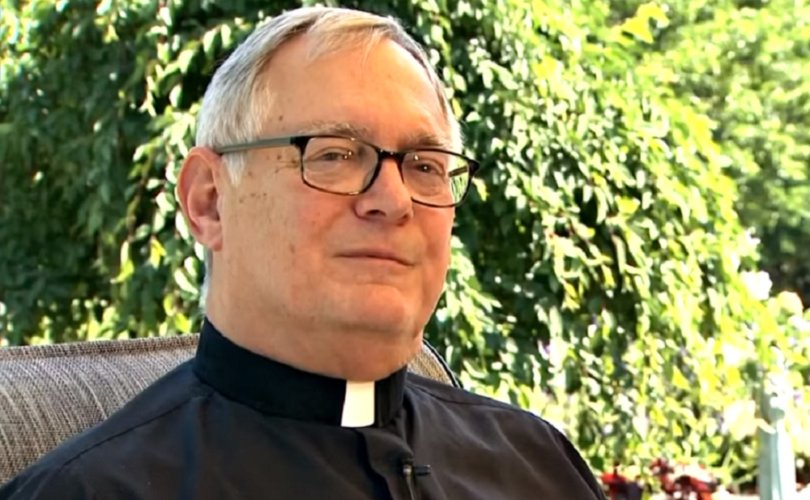 June 24, 2019 (Human Life International) — Organizers of “Gay Pride” events have successfully conditioned the media and the public to talk about these parades as if they were simply celebrations of “equality.” However, even some people who are fully on board with the LGBT agenda have pointed out the obvious: these parades are often less about celebrating equality than they are about celebrating promiscuous sex — the more debauched the better.

A few years ago an openly homosexual columnist in a major Canadian newspaper defended the much-derided declaration by Toronto's former mayor that the world-famous Toronto Pride parade is just an event where “middle-aged men with pot bellies” run down the street “buck naked.” “I'd say that was just an accurate description of what goes on,” admitted Josh Dehaas. “Disturbingly, more and more parents are bringing young children to watch the parade, exposing them to provocative displays of sexuality that no child should witness. If a politician believes in family values, why would he or she want to be associated with such debauchery?”

Truth be told, I still have a hard time wrapping my head around the fact that any parent, no matter how liberal, would bring their kids to these parades.  A lot of things happen at so-called “gay pride” parades that aren't fit for polite adult conversation, let alone for the eyes of children. It seems to me that keeping Pride parades child-free should be something that liberals and conservatives could easily agree on. After all, what benefit could there possibly be to exposing children to public nudity, simulated sex acts, highly sexualized displays of affection and dancing, etc.?

Alas, there is no such common ground to be found. After all, we now live in a world where parents openly and proudly encourage their three- and four-year-old children to explore “diverse” sexualities, helping them cross-dress in sexually provocative clothing, or bring their pre-pubescent children to gay bars to dance for money, or to appear on national TV shows, where they are lauded and feted by sycophantic hosts and cheering audiences. Furthermore, we have now reached a point where even the mildest expression of dissent from even the most extreme instantiations of the LGBT agenda is greeted with rage

Recently, one of the United States' Catholic bishops learned the hard way just how bad things have gotten. One June 1, the first day of a month that has been co-opted as “Pride month” by LGBT activists, Bishop Thomas Tobin sent out a tweet reminding Catholics that they should not be supporting or attending “Pride” events, which, he said, “promote a culture and encourage activities that are contrary to Catholic faith and morals.” Such events “are especially harmful for children,” noted the bishop.

The response to this rather mild tweet was extraordinary. As of this writing, there are over 95,000 responses to the tweet — the vast majority of which are deeply, even violently critical. For simply doing the bare minimum of what his job entails — i.e., stating and defending what the Catholic Church believes and has always taught — the bishop found himself in the international spotlight, portrayed as an odious purveyor of hatred and bigotry.

Articles about his tweet appeared on CNN, The Daily Mail, the Irish Post, and countless other news publications. Famous actors and actresses took to Twitter to vent their outrage. The mayor of Providence, Rhode Island, and the governor of the state both issued statements condemning the bishop's remark. One of the priests in Bishop Tobin's own diocese was featured in numerous news articles, after he pleaded with homosexual parishioners not to leave the Church over the bishop's tweet.

The next day, Bishop Tobin issued a statement expressing “regret,” not so much for the tweet itself, as the way it was received. “The Catholic Church has respect and love for members of the gay community, as do I,” the bishop stated. “Individuals with same-sex attraction are beloved children of God and our brothers and sisters.” However, he added, “As a Catholic Bishop…my obligation before God is to lead the faithful entrusted to my care and to teach the faith, clearly and compassionately, even on very difficult and sensitive issues.”

The Lessons We Can Learn

This disturbing episode is illuminating in more ways than one. Unfortunately, some of the lessons to be learned are far from encouraging.

In the first place, it seems that we are now at a point in which a completely straight-forward, non-emotional, impersonal, and non-confrontational expression of Catholic teaching — and, for that matter, moral common sense — is widely viewed as de facto intolerance, bigotry and hatred. The organized venom aimed at Bishop Tobin is — and, one suspects, was meant to be — a message sent to every faithful Christian in the country: the mere fact that you believe what Christians have always believed about sexuality makes you an enemy and a persona non grata. Either change your views and conform or be prepared to be hounded into silence.

Indeed, the thing that stands out most strongly to me is how mild Bishop Tobin's tweet was. To anyone with an ounce of common sense, it is clear that Gay Pride parades are harmful to the innocence of children. And to anyone who understands an iota of Catholic moral teaching, it is clear that Gay Pride parades are completely incompatible with life as a faithful Catholic. Bishop Tobin stated both of these facts in a calm, straightforward manner, without a hint of animosity. He was, in other words, doing what any priest or bishop charged with leading a flock should be expected to be doing on a regular basis — instructing the faithful in how to be better Catholics. Given the filth that young children are routinely exposed to at these parades, the bishop could easily have been justified in using stronger language.

As Catholic journalist Phil Lawler recently observed, “what is remarkable about Bishop Tobin's tweet is that it was so unusual — that other bishops and pastors have not routinely issued similar cautions.” Indeed, one discouraging effect of Bishop Tobin's tweet has been to highlight how rare it has become for Catholic shepherds to speak unpopular moral truths, particularly on sexual matters. If our priests and bishops were routinely catechizing the faithful on the totality of Catholic moral teaching, then the media would have had a very difficult time making Bishop Tobin's tweet into a national story. Instead, the good bishop would have been just one among countless other bishops and priests saying exactly the same thing.

We are awash in extremist LGBT propaganda. This is especially true now, in this month of June, when nearly all the large corporations use LGBT-themed marketing, which fills our streets and airwaves. Understandably, many Catholics in the pews simply don't know what to think, or how to respond. They do not realize how Catholic teaching is grounded in an authentic compassion for homosexual individuals, or how Catholic teaching promotes the happiness and flourishing of individuals and societies by showing how God's gift of sexuality is best put to use: in a loving union of a man and a woman oriented towards the begetting and raising of children. In the absence of clear voices from the pulpit presenting Catholic teaching in a compelling and unapologetic way, many Catholics are simply being swept away by the prevailing message in the culture. They feel overwhelmed, confused, and browbeaten.

There is a very real human cost to this silence! As Cardinal Joseph Ratzinger wrote in the “Letter to the bishops of the Catholic Church on the pastoral care of homosexual persons“:

[W]e wish to make it clear that departure from the Church's teaching, or silence about it, in an effort to provide pastoral care is neither caring nor pastoral. Only what is true can ultimately be pastoral. The neglect of the Church's position prevents homosexual men and women from receiving the care they need and deserve.

The Church's teachings on sexuality provide the road map for human fulfillment. For a pastor to remain silent out of a fear of losing social esteem or of “offending” Catholics in the pews is to abandon the sheep to the wolves.

Indeed, a natural response to the controversy over Bishop Tobin's tweet would have been for every other priest and bishop in the country to re-tweet the exact same message, or, at the very least, to issue a public statement supporting the bishop, and explaining Catholic teaching in a loving, compassionate way. What a great opportunity for evangelization that would have been! What a powerful message that would have sent! Instead, as the wolves circled for the kill, Bishop Tobin had more the look of a lone sheep than a shepherd among shepherds.

Even worse, the day after Bishop Tobin posted his tweet, one extremely prominent Catholic cleric, who even enjoys an advisory role at the Vatican, tweeted out a message saying, “Catholics need not be wary of June's #PrideMonth.” The previous day this same cleric posted a message wishing a “Happy #PrideMonth“. This is a breathtaking form of moral blindness. The Catholic Church's vision of sexuality, which has remained consistent since the earliest days of the Church, is one characterized by wholesomeness, fruitfulness, modesty, self-giving and joy. “Pride” celebrations proclaim a diametrically opposed message. It is quite true that we require creative thinkers to pursue pastoral approaches to reach out to homosexual persons in compassion and love in an effort to help them arrive at the fullness of Christian truth. However, there are simply no compelling arguments that supporting participating in wholly worldly public celebrations of sin does anything except spread confusion, at the enormous cost of souls. The hyper-sexualization of children — including the expectation that parents should bring their children to “Pride” events that is increasingly a feature of the LGBT movement is especially dismaying.

As Catholics we have to support our pastors when they speak difficult truths, as well as challenge them to speak up when they remain silent. A petition supporting Bishop Tobin has received over 25,000 signatures. That's a good start. I hope you will join me in praying for Bishop Tobin, and all of the Church's pastors, including myself, that we will be filled with the courage that comes from the Holy Spirit, and that we will imitate the early Apostles by fearlessly proclaiming the totality of the Gospel, regardless of the personal cost.