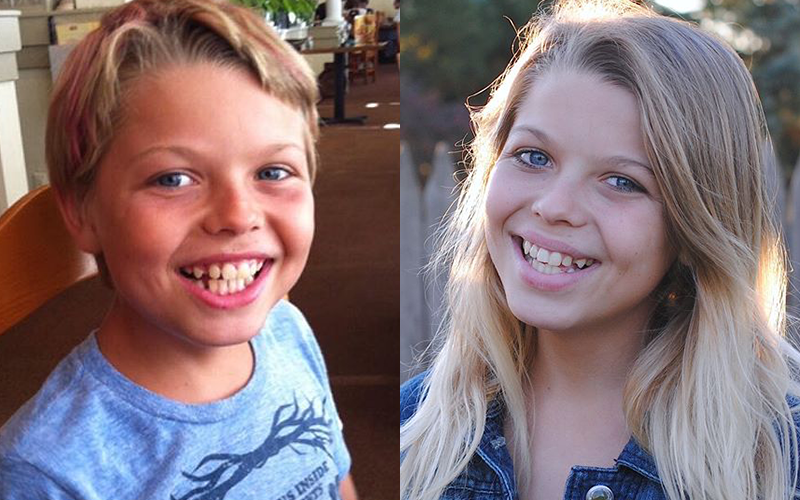 May 5, 2017 (ThePublicDiscourse) — A recent New York Post article tells the story of a Detroit mom named Erica who changed into a transgender dad named Eric. If that is not enough, his son had already changed genders: born a boy, he transitioned to living as a girl. Thus, mom became dad and son became daughter. Similarly, back in 2015, a fifty-two-year-old Canadian man made the news when he traded in his wife and seven kids to fulfill his “true identity” as a six-year-old transgender girl.

@Regrann from @natgeo – Sometimes our children lead the way. Corey, 14, socially transitioned from boy to girl in the past few years. She gave her Mom, Eric(a) the courage to begin her own transition from female to male. They are moving in opposite directions but toward their true selves. After her first shot of testosterone Erica said she finally felt “complete”. Photo by @ljohnphoto for Nat Geo's Special Issue-Gender Revolution. @natgeo @thephotosociety #gender #nonbinary – #regrann #thisiswhattranslookslike

What Makes a Person Trans?

The accepted LGBTQ standard for being a “real” trans woman or trans man is simply that a person desires to self-identify as the opposite of his or her biological sex and to be socially accepted as such. If a person feels distressed about his or her birth gender, then the politically correct action is for everyone to affirm the new and “authentic” gender identity—the one that exists only in the trans person's feelings.

In a recent interview on Fox News, transgender lawyer Jillian Weiss, executive director of the Transgender Legal Defense and Education Fund, was asked repeatedly by host Tucker Carlson, “What are the legal standards to be transgender?” Finally, the legal specialist admitted, “There are no legal standards.”

That’s right—no legal standards or legal definitions of transgender exist. Yet, as Carlson pointed out, $11 billion of federal money is spent on sex-specific programs, such as the Small Business Administration investing in businesses owned by women. Without a legal definition, these funds become easy prey for, as Carlson puts it, “charlatans” who will claim to be women simply to get the money.

When people feel that their biological sex doesn’t match their internal sense of gender, they are typically diagnosed with gender dysphoria. This is defined as “discomfort or distress that is caused by a discrepancy between a person’s gender identity and that person’s sex assigned at birth.” In other words, the medical diagnostician simply listens to and affirms the patient’s own verbal self-identification and self-diagnosis.

No objective tests can prove that the transgender condition exists. No physical examination, blood test, bone marrow test, chromosome test, or brain test will show that a person has gender dysphoria. It is a condition revealed solely by the patient’s feelings. Yet the recommended treatment is extreme—cross-gender hormones and sex-reassigning surgery.

Don’t be duped when trans activists conflate the unrelated condition of intersexuality with transgenderism to gain sympathy for a trans agenda. People with intersex conditions are not the same as self-identified transgender people. Being intersex is verifiable in the physical body; being transgender is not. People who identify as transgender usually have typical male or female anatomies.

How to Become Transgender

The wikiHow article entitled “How to Transition from Male to Female (Transgender)” outlines a simple five-part system for men who want to become women. Here is a small sample:

Receive a diagnosis. Over the course of a series of sessions, your therapist will evaluate your individual situation issuing a diagnosis. After determining that you have consistently experienced symptoms such as disgust with your genitals, a desire to remove signs of your biological sex, and or a certainty that your biological sex does not align with your true gender, your therapist will likely diagnose you with Gender Dysphoria.

These instructions are typical of the advice offered to those who believe they may be transgender. I myself followed a similar series of steps. Yet, in hindsight, after transitioning from male to female and back again, I see that many important topics are ignored by such advice, placing vulnerable people at risk. Four crucial omissions are most obvious and problematic.

First, these instructions fail to caution the reader about therapist bias. Asking friends in the trans community to recommend a therapist guarantees that the therapist will be biased toward recommending the radical step of transitioning.

Third, the high incidence of comorbid mental conditions is not mentioned. Those who have been diagnosed with bipolar disorder, obsessive-compulsive disorder, oppositional defiance behaviors, narcissism, autism, or other such disorders need to proceed cautiously when considering transitioning, because these disorders can cause symptoms of gender dysphoria. When the comorbid disorder is effectively treated, the gender discomfort may relent as well.

Fourth, regret after transition is real, and the attempted suicide rate is high. Unhappiness, depression, and inability to socially adapt have been linked to high rates of attempted suicide both before and after gender transition and sexual reassignment surgery. My website gathers academic research on this topic and reports the personal experiences of people who regret transitioning.

In theory, the medical community follows certain standards of care for transgender health, now in the seventh revision, which were developed by The World Professional Association for Transgender Health (WPATH). The standards provide guidelines for treating people who report having discomfort with their gender identity.

People think that because standards exist, people will be properly screened before undergoing the radical gender transition. Unfortunately, the overwhelming theme of these standards is affirmation. Again, clinical practitioners do not diagnose gender dysphoria. Their job is to approve and affirm the client’s self-diagnosis of gender dysphoria and help the patient fulfill the desire for transition. The standards also advise that each patient’s case is different, so the medical practitioners may (and should) adapt the protocols to the individual.

The patient controls the diagnosis of gender dysphoria. If a gender specialist or the patient wants to skip the screening protocols and move forward with hormone treatment and surgical procedures, they are free to do so. The standards of care do not come with any requirement that they be followed.

For example, the standards do, in fact, recommend that patients be pre-screened for other mental health conditions. But I routinely hear from family members who say that obvious comorbid conditions, such as autism or a history of abuse, are ignored. The physician or the counselor simply concludes that the psychological history is unimportant and allows the patient to proceed with hormone treatment.

As simple as it is to become a “real” transgender person, it’s even easier to turn into a fake one. “Fake” transgender people like me start out as real, but when they eventually see through the delusion of gender change and stop living the transgender life, transgender activists give them the disparaging label of “fake.”

If someone comes to the difficult and honest conclusion that transitioning didn’t result in a change of sex, then he or she is perceived as a threat to the transgender movement and must be discredited. Name-calling and bullying ensues. To be considered real, the transgender person must continue in the delusion that his or her gender changed. The problem with basing a diagnosis and irreversible treatment on people’s feelings, no matter how sincerely held, is that feelings can change.

My message attempts to help others avoid regret, yet the warning is not welcome to the advocates whose voice for transgender rights rings strong and loud. Some will find my words offensive, but then the truth can be offensive. Personally, I cannot think of anything more offensive than men diminishing the wonder and uniqueness of biological women by suggesting women are nothing more than men who have been pumped with hormones and may or may not have undergone cosmetic surgery.

Cheers and bravo to the offensive truth. Let’s reclaim the beautiful reality of male and female sexual difference and reject transgender ideology.

Walt Heyer is an author and public speaker with a passion to help others who regret gender change. Through his website, SexChangeRegret.com, and his blog, WaltHeyer.com, Heyer raises public awareness about the incidence of regret and the tragic consequences suffered as a result. Heyer’s story can be read in novel form in Kid Dakota and The Secret at Grandma’s House and in his autobiography, A Transgender’s Faith. Heyer’s other books include Paper Genders and Gender, Lies and Suicide.