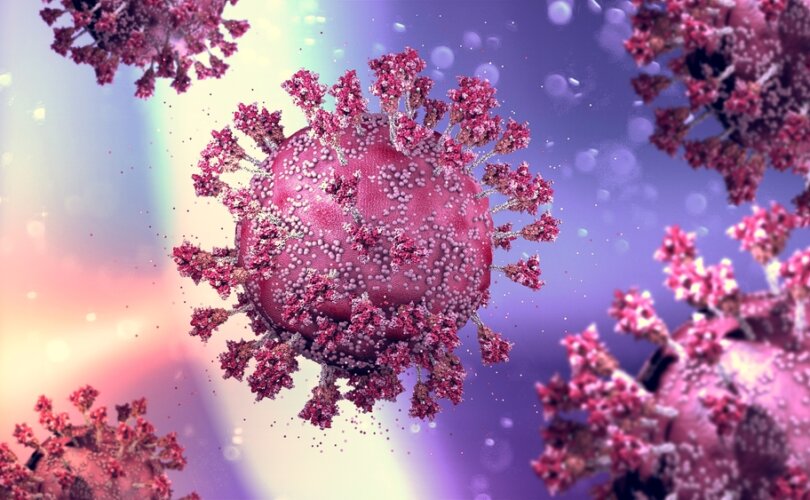 (The Epoch Times) — Dr. Flavio Cadegiani, a Brazilian endocrinologist, suspects that the worst has yet to come for spike protein-induced diseases in the endocrine system.

The endocrine system, colloquially known as the hormone system, is critical for our health. It regulates growth and development, mood, metabolism, reproduction, immunity, and functions of other organs through the secretion of hormones.

Hormones are one of the three biggest messengers in the body. Compared to the two other messengers – neurotransmitters and cytokines – hormones are slower in responding, and have systemic functions across the body rather than localized actions.

While cells can usually respond to neurotransmitters in milliseconds and cytokines in minutes to hours, cells that respond to hormones can take hours or even weeks.

Since hormones can have slow and systemic actions, a dysfunctional or damaged endocrine system will generally be slow in its symptom onset and recovery.

Studies have shown that spike proteins from COVID-19 infection and the vaccines can damage endocrine glands, including pituitary, thyroid, and adrenal glands, as well as reproductive organs, and many more.

Cadegiani raised a concern that the slower onset of endocrine pathologies may pose difficulties in diagnosis and treatment.

Endocrine pathologies can take longer to become apparent because endocrine glands have “reserves,” according to Cadegiani.

“What we’re going to see in the future [for endocrine diseases] is a little bit different from the other fields, because glands have reserves and the decrease of the reserve will not be clinically seen right now, but it may be in the future,” said Cadegiani at a Front Line COVID-19 Critical Care Alliance (FLCCC) conference in Kissimmee, Florida.

Therefore, affected individuals may show no symptoms until their reserves have been depleted.

Cadegiani said that most of his concerns for the future are speculative and based his own clinical observations. But since the pandemic and the administration of COVID-19 vaccines began, there have been increasing reports that implicate endocrine pathologies.

Hormones regulate the entire body, so once the reserves are depleted and underlying endocrine pathologies are unmasked, there may be cases of systemic dysregulations.

Endocrine glands control the function of many organs across the body, and each endocrine organ is also connected through a feedback loop, also known as a hormonal axis.

At the top of this chain is the hypothalamus, which is a diamond structure in the brain and acts as a master switchboard. It sends messages to the pituitary gland, a small, oval structure tucked behind the nose.

The pituitary gland is colloquially known as the master gland; it regulates other endocrine organs, together with the hypothalamus forming hormonal axes.

The pituitary gland is part of the hypothalamic-pituitary-gonadal (HPG) axis which regulates the reproductive organs, including the ovaries and the testes. In females, it is responsible for regulating the release of ovarian hormones as part of the menstrual cycle, and in males the axis regulates spermatogenesis.

The hypothalamic-pituitary-adrenal (HPA) axis is a neuroendocrine axis that mediates the adrenal gland, an organ that produce hormones that trigger the fight or flight response. The fight or flight process is a stress response that occurs in response to harmful threats, and can reduce metabolism, suppress immune, as well as activate the sympathetic nervous system.

Another major axis is the hypothalamic-pituitary-thyroid (HPT) axis. This regulates the thyroids and the hormones it secretes. Thyroid hormones are essential for biological functions of growth, regulation of the cardiovascular system, bone replacement, liver function, and metabolism.

The spike protein is the most toxic part of the SARS-CoV-2 virus. Studies on people with “long COVID” and post-vaccine symptoms often detected spike protein presence months or even a year after the exposure.

The key driver behind spike protein-induced disease is inflammation.

Upon entering cells, spike protein can activate pro-inflammatory pathways by inducing DNA damage, inhibiting DNA repair, causing stress to the cell’s mitochondria, which is critical for cell energy production, and much more. All of this leads to cellular stress, injury, and possible cell death.

When many cells are affected, it can cause problems in tissues and organs, affecting individual endocrine glands and the system.

Spike proteins may also contribute to autoimmunity. Since it shares many similarities with common human tissues and proteins – known as “molecular mimicry” – it has the potential to cause immune cells to mount an attack against the body’s own cells and organs, leading to endocrine damage.

Several studies have reported on endocrine pathologies following COVID-19, though data on the exact damage is still emerging.

As the master gland of the endocrine system, the pituitary gland secretes many hormones, including ones that regulate other endocrine glands:

Studies in cell culture have shown that the spike protein is able to suppress the production of LH and FSH in pituitary cells, with unknown long-term consequences in humans.

ACTH deficiencies have been observed following mRNA vaccination in Japan, with the person affected found to have a shrunken pituitary gland.

Cadegiani said that pathologies in the pituitary are difficult to diagnose; they are often masked by other conditions, therefore there is little literature on pituitary pathology presentation after COVID-19 vaccinations.

There is published literature with data that may be used as evidence to suggest spike protein injury at the adrenal glands.

The adrenal glands, located above the kidneys, produce hormones responsible for the stress response. This includes adrenaline, cortisol, and aldosterone. The release of these three hormones is critical for maintaining energy and other needs during stressful situations.

Studies on COVID-19 have shown that the adrenal glands are major sites of SARS-CoV-2 mRNA accumulation and spike protein production.

The glands are also likely to be involved in post-vaccine myocarditis events that are often seen in young males. Cadegiani reasons that this type of myocarditis may be a sign of adrenal dysfunction.

While dopamine mostly acts within the nervous system, both adrenaline and noradrenaline play important roles in stress responses.

Adrenaline activates the fight or flight stress response, and the noradrenaline supports the response by increasing heart rate, breaking down fats, and increasing blood sugar levels.

Intense and prolonged exercise trigger the fight or flight response, which is why catecholamines are usually elevated in athletes. Males in particular tend to have higher levels of catecholamine. Testosterone is also suspected to play a role in the higher incidence of myocarditis following vaccination.

He hypothesized that vaccines triggered a hyper-catecholaminergic state by elevating levels of adrenaline, causing hyperactivation of adrenaline.

Dysfunctions in the adrenal glands are likely to lead to adrenal insufficiency.

Cadegiani hypothesized adrenal insufficiency– a condition that the adrenal glands become unable to produce enough hormones – to be a possible consequence of spike protein injury.

There is already a report of adrenal insufficiency following infection; in the case of long COVID where there are spike protein remnants, it is likely that the damage will be prolonged, possibly leading to chronic damage.

Current research has also shown that complications from thrombocytopenia as a post-vaccine symptom have led to adrenal hemorrhage and adrenal insufficiency.

The thyroid is a butterfly-shaped gland located over the throat. It has a lot of functions, primarily regulating growth and metabolism.

It makes two hormones, thyroxine and triiodothyronine. Deficiencies in triiodothyronine results in hypothyroidism, characterized by a large thyroid; over-secretion of it can cause hyperthyroidism.

An autopsy study on 15 people deceased from COVID-19 found that 13 of them had viral RNA and proteins in their thyroid tissues. ACE2 receptors, previously thought to be not presented on the thyroid, were also detected, indicating a possible route for SARS-CoV-2 infection.

Though the research shows that thyroids can be implicated in infection, thyroiditis, which is inflammation of the thyroids, have currently only been reported in relation with the COVID-19 vaccine.

A study from Turkey stated that the COVID-19 vaccine can induce thyroiditis. The study evaluated 15 patients who developed thyroiditis following vaccination.

Four of the patients also developed Grave’s disease, which is an autoimmune disease and a complication of hyperthyroidism. Hashimoto’s disease, another thyroid autoimmune condition, has also been reported following vaccinations.

It is possible that spike proteins produced from vaccinations may attack the thyroid cells by binding to ACE2 receptors. However, looking at the high reports of autoimmune diseases, Cadegiani suspects that the pathogenesis of thyroid dysfunction is likely autoimmune. The spike protein has also demonstrated its autoimmune capacity due to high incidences of “molecular mimicry.”

The pancreas produces glucagon and insulin, two important hormones that regulate our blood sugar levels. Dysregulation of blood sugar levels are an indication of pancreatic dysfunction and may lead to complications such as diabetes.

Spike protein both from the vaccine and the virus have shown a potential to disturb glucose metabolism.

There have been reports of a sudden onset of type 1 diabetes, which is a form of autoimmune disease where the body attacks its own pancreatic beta cells.

Therefore Cadegiani proposed that there could be a loss or malfunction of pancreatic beta cells as studies have shown that the spike protein is able to directly affect and damage these beta cells, likely resulting in their death.

The harms of COVID-19 on male reproductive organs are well established.

A study from Thailand showed that in 153 sexually active men, around 64.7 percent experienced erectile dysfunction during COVID-19 infection, with 50 percent persisting in these symptoms three months after recovery.

A study evaluating adenovirus DNA vaccines showed that cells exposed to the vaccines also produced spike proteins that could interact and bind with ACE2 receptors, suggestive of equal endothelial damage.

Since the vaccine rolled out in 2021, the CDC data reported 193 cases of erectile dysfunction following COVID-19 vaccination.

An Israeli study on sperm donations has also noticed a reduction of 15 percent in sperm concentration and 22 percent in motile sperm count following COVID-19 mRNA vaccination.

Though sperm count gradually made a recovery after 145 days, sperm concentration and motility did not return to pre-vaccination levels, with unknown long-term effects.

Concerns of reproductive problems have also been reported in women, most particularly after vaccinations rather than after infection.

Dr. Paul Marik, a critical care expert, also observed that women were at a greater risk of presenting with post-vaccines symptoms in the clinic.

During the pandemic, many women reported menstrual abnormalities following vaccination. A study on Middle Eastern women found almost 70 percent of them reporting menstrual irregularities after vaccination.

A study funded by the National Institute of Health found a “temporary increase in menstrual cycle length” linked to the COVID-19 vaccination.

A study published on the website titled My Cycle Story reported over 290 women who have experienced decidual cast shedding after the COVID vaccines rolled out, even though less than 40 such cases have been documented over the past 109 years. This also indicated that many of the reproductive symptoms women were suffering from may be vaccine related, rather than related to COVID infections.

He cited a study that concluded “no association” between COVID-19 vaccines and fertility. The data, however, showed that unvaccinated women had a higher rate of pregnancy than the vaccinated, both for clinical and biochemical pregnancy.

The authors of the paper reviewed ten studies and found that unvaccinated women have a clinical and biochemical pregnancy rate of 47 and 60 percent respectively, while the COVID vaccinated had a rate of 45 and 51 percent.

Cadegiani predicts more cases of endocrinopathologies as a result of spike injuries in the future.

“Endocrine diseases progress slowly and then only clinically appears in the severe states,” said Cadegiani. “So it’s not possible to tell this [anytime] beforehand.”