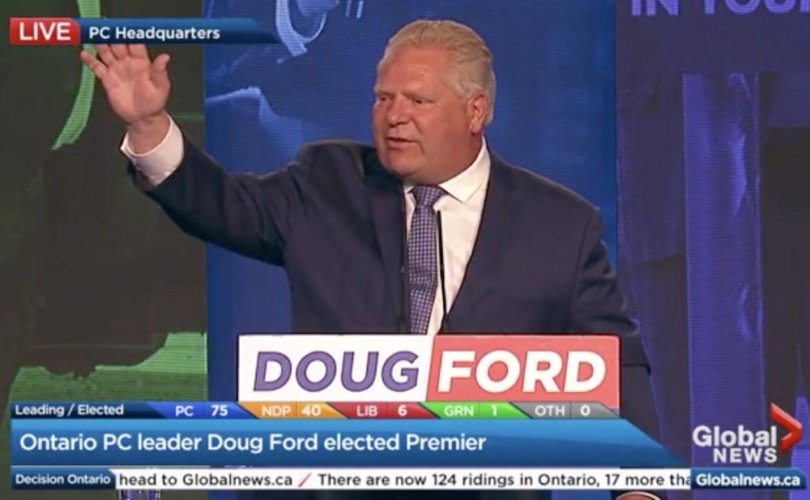 Doug Ford at his victory speech at the moment he says 'God bless,' June 7, 2018.screen grab

June 29, 2018 (Campaign Life Coalition) – On June 29th, Doug Ford announced his new Cabinet.  For the positions that most directly affect the issues of life and family – Education, Health, and Children/Youth – the picks were disappointing, to say the least.

Lisa Thompson, the newly-appointed Education Minister, has never publicly supported the Wynne/Levin sex curriculum.  That's a good thing.  She also voted against Bill 13, the anti-parental rights legislation that was a precursor to the curriculum. That's another good thing.

However, on the negative side, Thompson has a pro-abortion rating from CLC, and voted in favour of Bill 89. That Liberal legislation empowers the state to seize your children if you disagree with transgender ideology and refuse to encourage your child's delusion that he or she was “born in the wrong body”.

We had hoped that Monte McNaughton, the one-time crusader for parental rights would get the Education file.  It would have been a good fit given Monte's advocacy on the issue, and Ford's pledge to voters. However, now that we know it will be Thompson, we must hope and pray that she will respect the fact that her job is to carry out the overwhelming mandate that voters gave to Premier Ford, which included as a key element, repealing & replacing the Liberal sex curriculum.

Parents must now put tremendous pressure on Thompson – respectfully yet consistently – to ensure she implements Ford's pledge to parents, and that she does nothing to undermine his campaign promise on this critical issue.   And to help ensure that, CLC will present her with a copy of the petition to Doug Ford which currently has over 15,000 signatures from Ontarians demanding Premier Ford repeal the curriculum by the start of the new school year in September.

The Health Minister appointment of Christine Elliott is very disappointing.  As a publicly pro-abortion politician, she may not be favourable to the idea of parental notification for minor children seeking abortion, even though it's a common sense idea that Ford himself endorsed, and which the overwhelming majority of Ontarians would support.

During her political career as an MPP, Elliott was also an activist for transgender and LGBT ideology.  We were hoping that the incoming Health Minister would quickly delist elective, so-called “sex change” surgeries from OHIP, which the Wynne Liberals only recently began funding to the tune of up to $60,000 per pop, and instead, funnel those scarce tax dollars towards hiring more doctors and nurses, or buying life-saving MRI machines for rural communities that don't have one, and where patients as a result, may be dying needlessly.

Will Elliott put respect for the taxpayer before her own personal ideology? With a health care system that is in the midst of financial collapse due to insufficient cash flow, a choice between medically unnecessary operations where perfectly healthy body parts are chopped off, and fixing the doctors shortage which may be costing Ontario lives, should be an easy one.

The other sensitive portfolio we were keeping an eye out for was Ford's appointment of Minister for Children.  Again, it is disappointing to see MPP Lisa MacLeod getting the Ministerial nod for that file.  This is the Minister to whom we need to appeal to repeal the elements of Kathleen Wynne's Bill 89 which empowered Children's Aid agencies ban Christian and other faith-based couples from adopting children, and the additional power to seize biological children from parents who disagree with LGBT and transgender ideologies.

Tragically, MacLeod voted for 2nd reading of Bill 89, although when the PC Caucus revolted against Patrick Brown on the final vote, she went along with her fellow PC MPPs and voted against it on third reading.  Macleod is a gay pride marcher and has shown tremendous animus towards social conservatives in the past, and pro-life people in particular.

It wil be important for constituents of Minister MacLeod's, in her riding, and Ontarians in general, to respectfully and articulately educate and lobby her on why it's important to repeal Bill 89.

CONTINUE TO BE HOPEFUL AND ENGAGED

Notwithstanding the disappointing picks in these three important files, it is important to not become pessimistic nor disengaged, and to remember that Cabinet Ministers must still follow Doug Ford's agenda which included some very good commitments and changes in tone, affecting life and family issues, such as:

– free votes on any issue except the budget
– no interference with private members bills or motions
– conscience rights legislation for healthcare workers
– support for the idea of parental consent with children seeking abortion
– general opposition to the idea of banning free speech on taxpayer-owned public sidewalks
– and of course, repealing Kathleen Wynne's radical sex curriculum