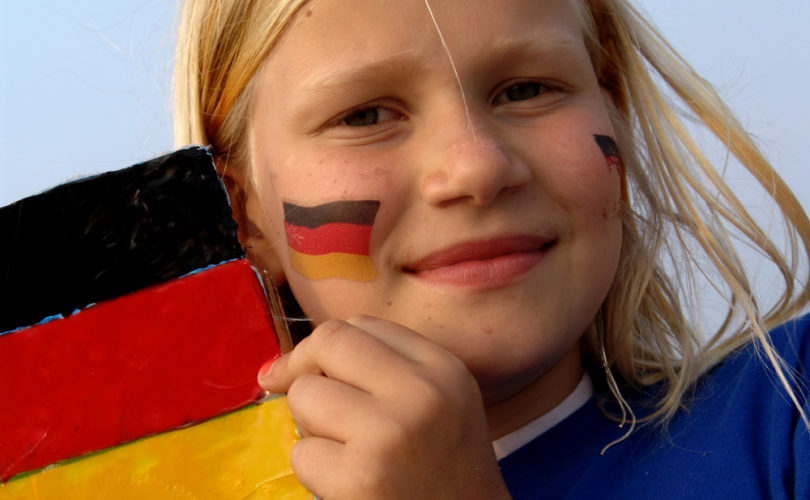 February 12, 2015 (MercatorNet.com) — One of the last places in the world you would expect to have many large families is Germany. German women have, on average, only 1.4 children each, and one in five women will remain childless. Chancellor Angela Merkel is one of those. By contrast, one of her chief ministers, Ursula von der Leyen, has seven children.

Probably there are not many families of that size in the country, but there are a substantial number with three or more — about 1.4 million, making up 12 percent of all families with children, according to this infographic on the website of the German Association of Large Families (KRFD). And remember, three kids qualifies as a “large family” these days.

With the country’s population declining in recent years – in spite of immigration, which the native Germans are getting somewhat restless about anyway – you would think the nation would be grateful to those couples slowing down that process by having three or more kids. But is it?

No. Not judging by the amount of space they get in the news media, and the kind of treatment they get when they are mentioned. Stereotypes and clichés are the order of the day, according to a recent study carried out by a group of researchers from Cologne. After an exhaustive analysis of 1,100 articles mentioning families published by German newspapers in 2011 and 2012, they entitled their report, “The Last of the Politicians’ Interests”.

It turns out that German media just don’t get it. If they mention large families it is only to point out the problems some of them have: financial burdens, family conflict and insecure housing for example. Cliches suggesting that “families with many children are abnormal” or “only families with immigrant parents have many children” are trotted out.

In larger families the mother is more likely to stay at home while the father goes out to work. In 41 percent of the articles examined this traditional model was presented in a negative light – partly on the assumption that the mother only has a couple of children to look after. The needs of the larger family in terms of a home-maker was simply overlooked.

Again, while news about the family in general was mostly related to politics, those concerning large families were always presented in relation to specific and problematic cases.

In general, the topic of family and of the number of children was treated in a reductive way, giving space only to opinions that were based on commonplaces and stereotypes, which in turn were often supported by the voices of so called “experts.” Daily papers in particular seldom give a voice to the real protagonists.

More often, though, German journalists simply avert their eyes. In just under 60 percent of the examined articles in fact, the existence of many children was commented on neither positively nor negatively. They were treated as devoid of public relevance, unless they were in trouble.

Further, any articles about large families that did appear were predominantly written by women, though there is an equal representation of both sexes in the newsrooms. Moreover, when the topic concerned public policy regarding the family, authors were equally represented among men and women.

Regional papers, the research showed, are much more likely to write about large families.

It is evident that white middleclass values predominate in the national German media – as elsewhere in the developed world – and that large families are associated with an immigrant class whose values are somewhat alien and not to be encouraged.

But journalists need to wake up to their country’s need of larger families, go looking for families that break class barriers and popular stereotypes, and find out what makes them tick. With a mother of seven holding a top government post (and Ursula van der Leyen even had a “real job” before all that – she is a doctor) they have a very respectable reason to do so.