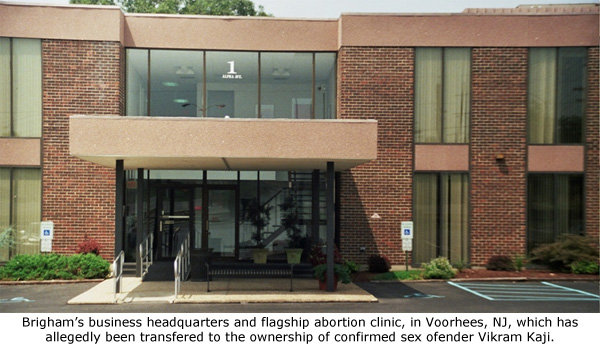 Voorhees, NJ, April 7, 2015 (OperationRescue.org) – It is the dirty little secret of the abortion cartel. From coast to coast, Operation Rescue has documented case after case of abortionists taking sexual advantage of their patients.

One such abortionist with a confirmed history of sex abuse is New Jersey abortionist Vikram Kaji, a long-time employee of the notorious illegal abortionist Steven Chase Brigham, who operates a chain of at least 17 abortion clinics under the American Women’s Services banner.

Since New Jersey only allows licensed physicians to operate medical facilities, when Brigham’s New Jersey medical license was revoked in the fall of 2014 he was ordered to divest himself from his New Jersey abortion clinic holdings.

Kaji was convicted by the New Jersey Board of Medical Examiners in 1993 for having improper sexual contact with three patients. After a lengthy relationship that involved improper sexual conduct, Kaji reportedly had sex without a condom with one young girl in the birthing center of his office during business hours. He knew his victim was vulnerable to his advances because she had been a depressed victim of child sex abuse with a history of psychiatric hospitalization. He later misperscribed drugs for her including Seconal and steroids. Kaji at first fought the charges, saying the sex was consensual, but later admitted that he had made an error in moral judgment.

Kaji was also accused of giving improper breast and rectal exams to two other women. New Jersey placed Kaji on a 1-year suspension and fined him $5,000 and ordered him to undergo psychological counseling.

The New York Medical Board was less forgiving. It revoked Kaji’s medical license for “sexual misconduct and drug abuse” in 1995, and banned him from practicing in that state.

Kaji also participated in at least one documented case of forced abortion.

In 2005, Marcia Carroll, the mother of one of Kaji’s underage patients, testified before the United States House of Representatives (see p. 17) regarding her daughter’s February, 2005 experience at Kaji’s New Jersey clinic. Carroll stated that her daughter was “coerced, harassed and threatened” into having an abortion across state lines, in direct violation of parental consent laws, and the clinic staff never breathed a word about Kaji’s long history of sexual abuse.”

In fact, it would be hard for New Jersey patients to be aware of Kaji’s history of sexual abuse since the Board’s physician license look-up page excludes any derogatory information older than ten years. A recent search of Kaji’s New Jersey license reveals two disciplinary incidents, but the disciplinary documents are difficult to access.

“Allowing Kaji to take over Brigham’s already shoddy New Jersey abortion businesses is like putting a fox in the hen house. It is unconscionable and guaranteed to lead to continued abuse,” said Operation Rescue President Troy Newman. “There is no doubt in my mind that Kaji used the opportunity to victimize more women.”

But that is not the end of concerns over Kaji.

In May 2013, the New Jersey Board of State Medical Examiners filed an Interim Consent Order against Kaji. The order reveals that inspections of several of Brigham’s abortion facilities revealed deficiencies and Board violations. The Board found that Kaji had “failed to adequately fulfill his responsibilities as Medical Director.”

Furthermore, it was noted that Kaji had recently suffered a stroke that impaired his memory and the vision in his right eye, raising questions about his ability to continue practicing.

Now, women face the dreadful prospect of Kaji owning and operating Brigham’s very busy abortion clinics without oversight of Brigham, as shoddy as that oversight may have been.

No Record of Transfer

But did the alleged business transfer really take place?

A search of the New Jersey Division of Revenue Business Entity Search yielded multiple companies in which Brigham is listed as the principal party, many of which are recognizable as some of his abortion clinic aliases.

However, a Business Entity Search under Vikram Kaji’s name yielded only one entry: The Kaji Family Charitable Trust, established in 1977.

“We were hoping that since Brigham’s abortion business is so notoriously shoddy, he would not be able to find a buyer and his eight New Jersey abortion clinics would be forced to close. However, we also suspected he would do anything to keep the money generated by these clinics flowing into his bank account. Based on his documented history of deceptive conduct, Brigham is probably one of the most brazenly dishonest abortionists in America,” said Operation Rescue President Troy Newman. “Now it appears that Brigham may be using Kaji as a pawn in another nefarious scheme to maintain secret control his abortion clinics.”

NJ.com is reporting that Brigham is appealing his revocation, with his attorney having the gall to claim Brigham is “a devoted physician who felt compelled to fill the void for late-term abortion services.”

Since Brigham was first licensed in 1988, he has faced one legal issue after another related to is shady business dealings, shoddy abortion practices, and illegal conduct. He has undergone multiple license revocations and discipline in numerous states. Maryland andPennsylvania shut down all of his abortion clinics in those states noting that they posed an immediate and serious threat to the health and safety of patients at those facilities.

Nevertheless, he has continued to operate a chain of 17 abortion facilities in several states, including New Jersey, Virginia, and Florida, under a number of business entities that have served to confuse anyone attempting to get to the bottom of his complicated business holdings.

Despite Brigham’s alleged divestment of his New Jersey abortion businesses, he will retain control of the remaining nine clinics he operates in other states.

Based on Brigham’s previous behavior patterns, it is possible that Brigham may be using his long-time associate, Kaji, as a pawn to give the appearance of complying with New Jersey’s order in a similar way that he used an elderly doctor, George Shepard, Jr., to give his illicit Elkton, Maryland, abortion clinic an appearance of legitimacy in 2010.

In the deceptive scheme that ultimately cost Brigham his New Jersey medical license, Brigham would start late-term abortions – some as late as 30 weeks — at his office in Voorhees, New Jersey. However, it was only legal for him to do abortions in New Jersey up to 14 weeks. Later, he would transport the women to a clandestine facility in Elkton, Maryland, where the abortions would be completed.

Brigham had no medical license in Maryland, so he employed octogenarian George Shepard, Jr. as the facility’s “medical director” to give his clinic the appearance of legitimacy, even attributing abortion procedures to Shepard. But Shepard was elderly and had a disabled arm. He was incapable of conducting abortions. A transcript of an interview with Shepard conducted by the Maryland Board of Physicians indicated that Shepard was unaware that Brigham had used him as a pawn to conceal the illegitimacy of Brigham’s Maryland abortion practice. Shepard thought he was employed to check the refrigerator temperatures and “make sure everything was done right.”

It was only after Brigham and his associate, Nicola Riley, seriously botched an abortion on a young woman at the Elkton facility that the illegal scheme was discovered. It was this incident that led to his New Jersey license revocation last year.

Now it is possible that Vikram Kaji may be Brigham’s next pawn in a scheme to maintain secret control of his New Jersey abortion clinics, should the appeal of his revocation ever succeed.

Another example of Brigham using deception to conceal his involvement in an abortion business was that of the horribly misnamed “Integrity Family Health,” an abortion facility in Philadelphia, Pennsylvania. Similar to his order to divest in New Jersey, Brigham had been ordered by the State of Pennsylvania in July 2010, not to have any ownership or affiliation with any abortion business in that state after authorities determined that his abortion operations were too dangerous to continue.

Given Kaji’s recent stroke and accompanying health issues, there is doubt that he is physically and mentally capable of running a chain of high-volume abortion clinics. Also, considering Kaji’s history of sexually abusing his patients, it is grossly inappropriate for him to be involved in ownership of abortion clinics, where temptations for exploitation of vulnerable women abound.

“Kaji is about as bad as Brigham when it comes to posing a risk to the public,” said Newman. “It is completely unacceptable that he is operating Brigham’s eight abortion facilities. It’s like the women of New Jersey were just tossed out of the frying pan and into the fire. The Board of Medical Examiners should reject this transfer and shut down Brigham’s abortion businesses for good.”