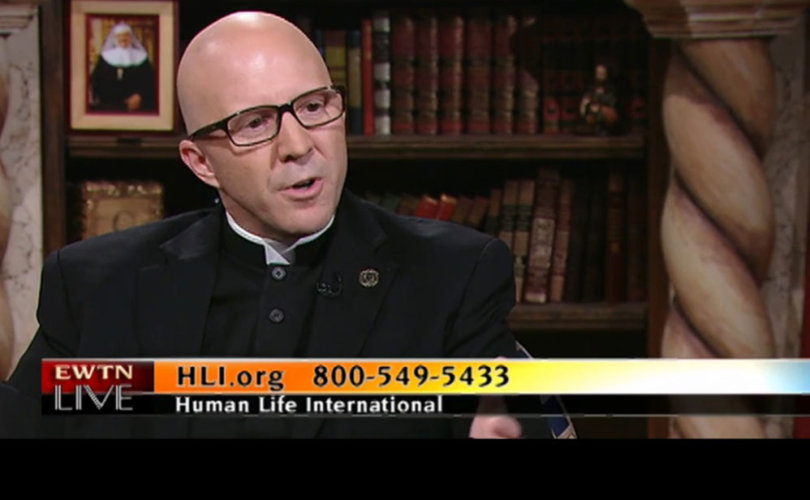 Son of man, I have appointed you a sentinel for the house of Israel. When you hear a word from my mouth, you shall warn them for me. If I say to the wicked, you shall surely die–and you do not warn them or speak out to dissuade the wicked from their evil conduct in order to save their lives– then they shall die for their sin, but I will hold you responsible for their blood. (Ezekiel 17-18)

September 1, 2016 (hli.org) – These piercing words spoken by Almighty God should cause every pastor entrusted with the care of souls to pause for reflection. Given some very public offenses from Catholics in recent days, some pastoral clarity is very much needed.

Church ministers, moved by mercy, should adopt a sensitive pastoral approach in all such situations – an approach both patient but also faithfully confident in the saving truth of the Gospel and the transforming power of God’s grace, trusting in the words of Jesus Christ, who promises that “you will know the truth, and the truth will make you free (Jn 8:32).” Pastors should strive to avoid both a subjectivism that ignores the truth or a rigorism that lacks mercy.

The archbishop challenges and reminds those responsible for the guidance of God’s people of their moral duty to engage in firm yet gentle resolve those living in sinful and irregular situations. Echoing Pope Francis’ invitation, Archbishop Chaput calls the Church in Philadelphia – though his message has been heard beyond his archdiocese – to renew and intensify its missionary zeal in the proclamation of the Gospel; not only to proclaim the mercy of God, but to persuasively proclaim Church teaching concerning the nature of the family and the Sacraments of Holy Matrimony and the Eucharist instituted by God. Pastors and ministers are to strengthen families and reach out to those whose marriages have failed, as well as reach out to those who are alienated from the life of the Church or not living in full accord with Catholic belief.

The archbishop makes clear through his pastoral guidelines what the Church authentically teaches concerning marriage and morality. While many revolutionaries have sought to use Amoris Laetitia to proclaim a “new” narrative on the subjects of marriage, reception of Holy Communion, cohabitation, and objectively immoral lifestyles, the archbishop affirms Church teaching, corrects the false narrative, and offers pastoral guidelines to the pastors of the Church to lead souls to Christ:

The Holy Father’s statements build on the classic Catholic understanding, key to moral theology, of the relationship between objective truth about right and wrong – for example, the truth about marriage revealed by Jesus himself – and how the individual person grasps and applies that truth to particular situations in his or her judgment of conscience. Catholic teaching makes clear that the subjective conscience of the individual can never be set against objective moral truth, as if conscience and truth were two competing principles for moral decision-making.

It is true that the cardinal chosen by the Holy Father to introduce the exhortation upon its publication has offered a different interpretation on the relationship between objective truth and conscience. This is one of the many sources of confusion—where the document is ambiguous, it has been claimed by many who have spoken to the Holy Father that his intention was to let individual dioceses interpret the practical considerations of Amoris Laetitiaindividually, even if they contradict the adjacent diocese. They have not been corrected, and the document appears as if written for this purpose, so that is the prevailing interpretation.

Archbishop Chaput, bypassing the contentious debates over the exhortation, instead offers focused direction and counsel. Amoris Laetitia does not absolve us from conforming our lives to Christ and the Church’s moral precepts, but rather a call to present the beauty of Jesus’ invitation – repent and believe in the Gospel – more persuasively.

Instead of compromising with a culture gradually becoming more secular, we must present Church teaching as a remedy, a healing balm to be generously poured upon the wounds of the suffering, confused, and lost, which requires genuine counsel and patient resolve, never misleading or offering partial truths.

The necessity of the Archbishop’s pastoral was confirmed recently when Vice President Joe Biden, a self-professed Catholic from the Diocese of Wilmington, Delaware, publicly officiated the civil union of two men in his residence at the US Naval Observatory. He knowingly rejects Church teaching concerning the sacred institution of matrimony and instead endorses what is scandalously offensive to God and the faithful. Is it any wonder that Catholics do not understand the nature of marriage when such audacious and public scandal goes uncorrected in public?

We should also consider the public statements and actions of Senator Tim Kaine who also professes Catholicism; yet, he has a perfect record in the US Senate supporting abortion rights and Planned Parenthood. He is also the co-sponsor of the Women’s Health Protection Act, a bill that jeopardizes pro-life laws across the US. He recently received a standing ovation at his parish of Saint Elizabeth in the Diocese of Richmond, Virginia, and praise from Catholic priests over his nomination as the Democratic Vice Presidential candidate.

One can see why the model of pastoral direction that Archbishop Chaput offers in his pastoral is so urgently needed. When many bishops and Church leaders – US and international – are wondering why the percentage of Catholics leaving the Church is growing, they need only look at prominent examples of mockery and scandal, the lack of clarity and correction from the Church, and wonder if the Church really believes what she says she believes.

We also hear the mantra, “follow your conscience” from many proponents calling for a compromise in Church teaching on marriage, reception of Holy Communion, contraception, abortion, divorce, co-habitation, and same-sex unions without explaining what the Church teaches concerning the nature of conscience. Instead, they treat conscience as if it were independent of responsibility and obligation to adhere and be continually guided by objective truth. They erroneously teach that conscience is its own “master” instead of a “pupil” – always seeking and learning.

Conscience is a judgment of reason whereby the human person recognizes the moral quality of a concrete act that he is going to perform, is in the process of performing, or has already completed. In all he says and does, man is obliged to follow faithfully what he knows to be just and right. (Catechism of the Catholic Church 1778)

A well-formed conscience is upright and truthful. It formulates its judgments according to reason, in conformity with the true good willed by the wisdom of the Creator. Everyone must avail himself of the means to form his conscience. (1798)

While some within the Church attempt to rewrite God’s plan for marriage and family, portraying Jesus’ teachings as too difficult or not pastoral enough, it is encouraging and I dare say refreshing to see an archbishop step beyond the confusion and invite those under his care to an authentic life in Christ.

Knowing that the task at hand will be difficult and filled with many challenges, Archbishop Chaput offers this thought to pastors and those assisting them:

The grace of Jesus Christ is more than a pious cliché; it is a real and powerful seed of change in the believing heart. The lives of many saints bear witness that grace can take great sinners and, by its power of interior renewal, remake them in holiness of life. Pastors and all who work in the service of the Church should tirelessly promote hope in this saving mystery.

Let us pray that other leaders within the Church will heed these powerful words, which not only convict the heart and mind but also offer hope to us all.

This article was originally published by Human Life International and it re-published with permission.

Archbishop Chaput: ‘Remarried’ Catholics must be abstinent to receive Communion

Bishop: Amoris Laetitia’s ‘intentional ambiguity’ means people will do ‘whatever they want’