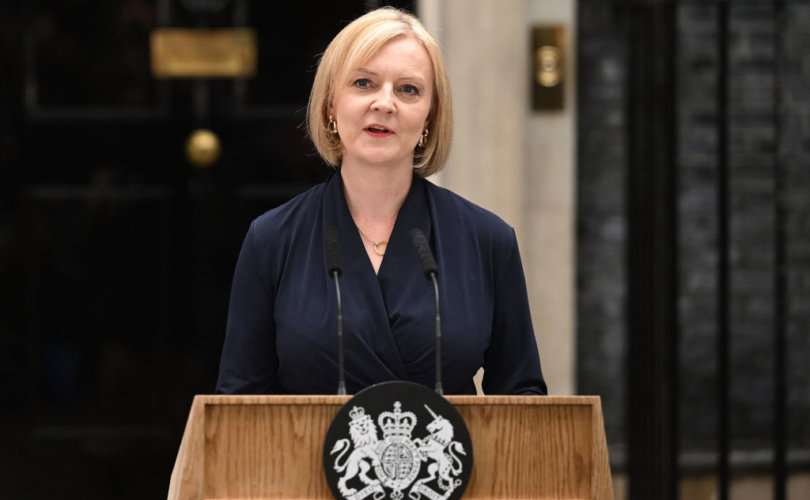 (Right to Life UK) – Liz Truss MP has won the Conservative leadership contest in Britain by 81,326 votes to 60,399 and has replaced Boris Johnson as prime minister.

On September 5, Truss finalized her selection of cabinet and ministerial roles, meeting the following day with the late Queen Elizabeth II at Balmoral where she was appointed as the new prime minister.

In 2011, she voted against introducing independent counselling for abortion.

Polling from Savanta ComRes shows that there is strong public support for this change in the law, with 93 percent of women agreeing that a woman considering abortion should have a legal right to independent counselling from a source that has no financial interest in her decision.

In 2016, she voted in favour of allowing the creation of three-parent embryos, also known as mitochondrial donation.

In 2019, she voted in favour of an amendment to impose a law change on Northern Ireland to introduce abortion to the region.

Then in 2021, she voted in support of a motion to approve regulations to give the Northern Ireland secretary new powers to impose the commissioning of abortion services on Northern Ireland.

This imposed an abortion regime on Northern Ireland that included the introduction of abortion through to birth for babies with disabilities including Down’s syndrome, cleft lip, and club foot. It also introduced de facto abortion on demand through to 24 weeks and allowed sex-selective abortion through to 12 weeks.

During the leadership contest husting sessions earlier this year, responding to a question on whether she would abolish abortion in Northern Ireland, appearing to misunderstand the concept of devolution, she responded: “I’m afraid I don’t agree with you. We are a United Kingdom and we need all our laws to apply across the United Kingdom. That is what a Union is.”

She has abstained on a vote to introduce assisted suicide and a number of votes on abortion including introducing an explicit ban on sex-selective abortion.

Furthermore, there currently is a contradiction in British law. The survival rate for extremely premature babies has doubled over the past decade, prompting new guidance from the British Association of Perinatal Medicine that allows doctors to try to save babies born as early as 22 weeks into a pregnancy.

This means that in one room of a hospital, doctors could be working to save a baby born alive before 24 weeks whilst in another room of the same hospital, a doctor could perform an abortion that would end the life of a baby at the same age.

Independent polling from Savanta ComRes shows that 70 percent of women want to see the time limit for abortion reduced to 20 weeks or below.

Right To Life UK spokesperson Catherine Robinson said: “Congratulations to Liz Truss on being elected as prime minister of the United Kingdom. We hope that she uses her position to protect the most vulnerable in the United Kingdom, including the unborn child, and increase support for women facing unplanned pregnancies.”

“While Liz Truss’s voting record and comments on life issues indicate that she takes a pro-abortion position on the issue, it is clear that polling shows that the public do not want to see further pro-abortion changes to legislation, with only 1 percent of the population supporting increasing the current abortion time limit from 24 weeks through to birth.”

Reprinted with permission from Right to Life UK.