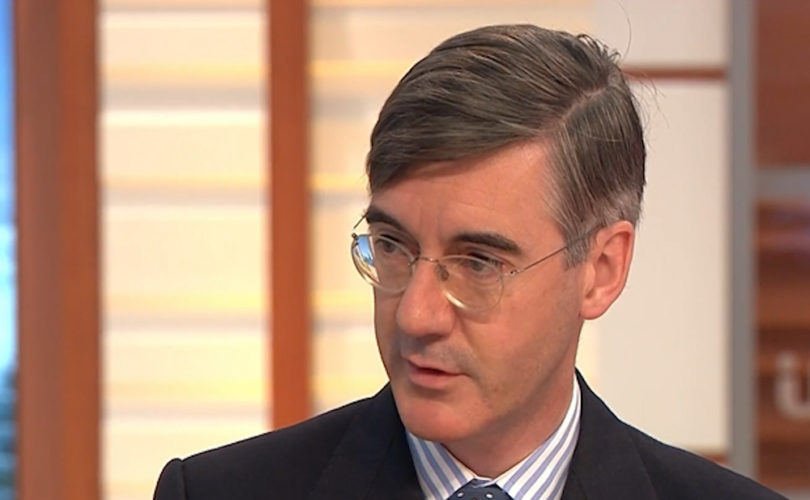 September 8, 2017 (SPUC) — Conservative MP Jacob Rees-Mogg has been branded “extreme” and “out of touch” after saying that he is completely opposed to abortion. But is he really the extreme one?

A rather strange media storm erupted yesterday after Jacob Rees-Mogg, an MP well known for his Catholicism and social conservatism “revealed” yesterday that he is “completely opposed” to abortion.

Mr. Rees-Mogg, who has recently gained a large social media following (known as Moggmentum),” was a guest on Good Morning Britain. When asked about his views on abortion he said: “I am completely opposed to abortion”, and when questioned if this extended to cases of rape, he replied: “I'm afraid so” and when pushed said “my personal view is that life begins at the point of conception and abortion is morally indefensible”. He also said that, in line with Church teaching, he is opposed to same-sex marriage.

His honest stating of his views has lead to howls of outrage in the media, and to him being branded a bigot, with abhorrent views, who could set the Tories back for decades. The Evening Standard ran with the headline Jacob Rees-Mogg faces angry backlash over 'extreme' and 'out-of-touch' views on gay marriage and abortion.

But who thinks this? If you read the article, you'll see that most of the quotes are from … abortion providers. Katherine O'Brien, head of policy research at BPAS, one of the largest abortion providers in the UK said: “Rees-Mogg's stance on abortion is quite simply extreme, and extremely out-of-touch.” Laura Russell, Policy Manager for the Family Planning Assocation, said the comments are “massively out of step with the vast majority of the public’s opinion, including people of faith”. Marie Stopes, another major abortion provider, also commented.

Mr. Rees-Mogg said that he based his opposition on abortion on the fact that life begins at conception – an indisputable scientific fact. Is this extreme? Opposing abortion in the case of rape may not be popular, but as a rather bemused Julia Hartley-Brewer pointed out to Kerry Abel of Abortion Rights on Talk Radio this morning, it is a perfectly logical, morally defensible position for someone who believes, as he does, that abortion is the killing of an unborn child.

BPAS, on the other hand, believe that there should be no limits on abortion at all. They believe abortion should be completely decriminalised. If anyone was in doubt about the implications of that, it was made clear a few weeks ago, when BPAS CEO Ann Furedi shocked the panellists on Loose Women by confirming she believes abortion should be allowed up until birth and for any reason a woman chooses, including on grounds of gender.

These views make it laughable that BPAS can accuse Mr Rees-Mogg of being out of touch with popular opinion. The most recent survey of British views on abortion found that 89 percent of the general population and 91 percent of women agree that gender-selective abortion should be explicitly banned by the law. It also revealed that 99 percent of the public oppose the abortion limit being raised to birth.

Here are two interviews, one with Jacob Rees-Mogg, and one with Ann Furedi. You can decide for yourself who the “extreme” one is.