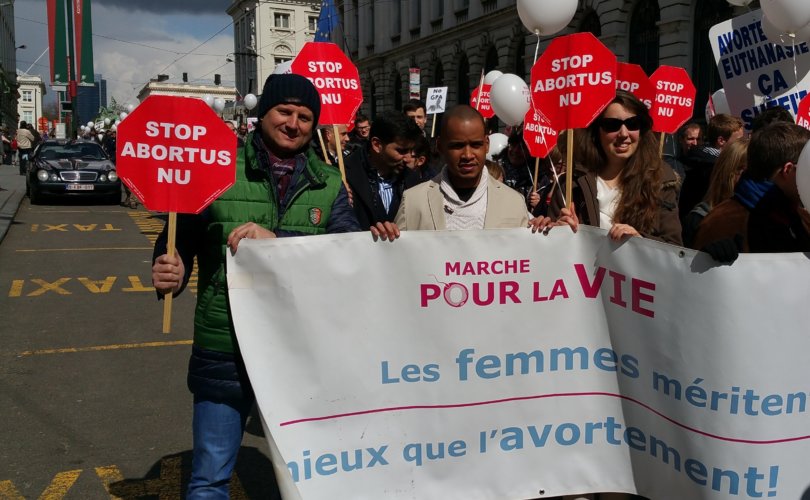 HLI’s Joannes Bucher (left) at the 2016 March for Life in Brussels, Belgium.

April 26, 2016 (HLI) — The terrible Brussels bombings were rightly given a great deal of coverage in the mass media and they were strongly denounced by all who had a voice. What was strange was that these opinion-makers and personalities don’t seem to perceive or don’t want to perceive the diabolical ideology that motivated the attacks.

If the attacks are evil, shouldn’t the motivations behind them be understood as evil as well?

These same opinion-makers and politicians have not only missed this evil, but they are missing another terror has been spreading. This terror is protected by state law and happens every day behind closed doors: the legal killing of unborn children.

When leaders refuse to understand an obvious evil and actively participate in other evils, the question arises: Are we reigned by a “totalitarian democracy”?

With such questions begging answers, it was of utmost importance that the March for Life 2016 was held again in Brussels. It has been and will be a necessary counterpoint to this gruesome farce of “democracy.” The organizers and participants deserve our praise for speaking out on behalf of the most vulnerable in the womb.

More than one person mentioned the disconnect: there is a high priority placed on immigrants’ rights without concern for responsibilities, while the rights of the unborn are trampled by those who have the responsibility to defend them. Europe is undergoing mass immigration while at the same time millions of innocent Europeans lose their lives because of widespread abortion.

Every human person, regardless of race or religion, has a right to flee terror or seek opportunity within the bounds of just laws of the nation. But no rights make sense without the first right: the right to life. If this right can be taken away, every right is precarious.

Over 1,000 people, mostly young students, came to give witness for the dignity of each unborn child as we marched to the Palais des Justice on Sunday, April 17.

Before the March even began, police police arrested many pro-abortion activists who tried to violently disturb the rally at the Montes des Arts. This happens every year, though the police have gotten better about understanding the source of the threat and acting accordingly.

That the march proceeded despite threats and political pressure is a success in itself, given the anti-life circumstances. But we should not underestimate the courageous commitment of those who fight for life. HLI and other participants showed their solidarity with the victims of the Brussels bombings and with the victims of abortion. HLI members marched in the crowd and called for an immediate stop of the murder of innocent children.

Europe is dying. Opinion-leaders and politicians should be clever enough to find new ways to support mothers – especially to promote virtue, responsibility and opportunity for men and women – so that they don’t kill their own babies.

All humans, unborn and born, should be protected by law! “STOP ABORTUS NU – Pour la Vie!” It is our fundamental right. Or as was written in the 1948 International Declaration of Human Rights of the United Nations: “All human beings are born free and equal in dignity and rights. They are endowed with reason and conscience and should act in a spirit of brotherhood today.”

We pray and act so that those in power will return to these words and their original intent.