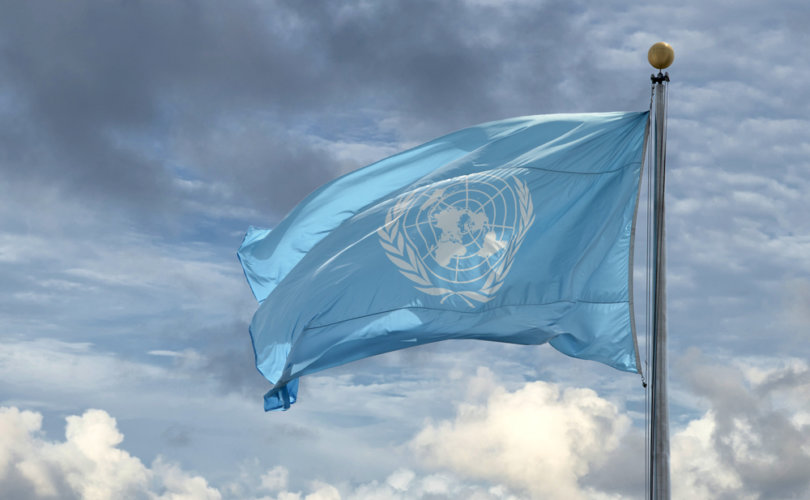 The United Nations Population Fund, or UNFPA, is one organization whose name says a great deal about its true concern. It was, well, born during the overpopulation panic codified in the publication of Paul Ehrlich’s “The Population Bomb” in the late 1960s, but before the widespread abuses of population control became public. Like the abortion- and contraception-pushing Population Services International (1970), and the older eugenics-based Population Council, which was started by the Rockefellers in 1952, the UNFPA’s original concern was not with development, health, or women’s empowerment, but with reversing the unchecked growth of world population.

The population control industry went through what might now be called a “rebranding” in the 1990s. There was a series of conferences hosted by the United Nations and its partners in Rio de Janiero (1992), Vienna (1993), Cairo (1994), and Beijing (1995), that recast population control in terms of “sustainable development” (Rio), “human rights” (Vienna), “reproductive health” (Cairo) and “women’s and ‘girl-child’ equality” (Beijing). We are not convinced that it was a coincidence that these moves followed the declassification of NSSM-200, the Nixon Administration’s national security memorandum saying that it was in the United States’ security interests to suppress the populations of poor countries in order to have access to their natural resources. Also trickling out in the news were reports of China’s widespread abuses of coercive population control.

Overpopulation panic had many ripple effects, including the reshaping of US foreign policy into making population control a priority.

And it is still a top priority of US foreign policy. The declassified NSSM-200 document is still published on the USAID web site to this day, and it is beyond obvious that its recommendations to use NGOs to implement population control in order to avoid charges of “imperialism” were implemented. The abuses that followed the embrace of the depopulation mindset are also well known. 1974, the year NSSM-200 was written and classified, was not coincidentally the year of the first UN World Population Conference in Bucharest.

The irony of the UN’s 1995 conference focusing on the rights of women and girls being held in Beijing was particularly demonic: China’s one-child policy was already leading to forced abortion and sterilization of women, and to girls being systematically killed in the womb since parents—forced to have one child—chose to have boys due to cultural norms. This ongoing crime against humanity has led to gendercide on a massive scale, and a huge imbalance between boys and girls in China, even as the UNFPA and others for whom “population” is still the primary concern continue to celebrate China’s population policies. Last year the one-child policy became the two-child policy, yet it is still coercive and still celebrated by the elite as a triumph of “reproductive health” and “sustainable development.”

This is why every Christian and women’s rights activist should celebrate the Trump Administration’s decision this week to remove funding from the UNFPA. Though the UNFPA still insists in carefully worded statements that it doesn’t promote abortion, it does pass tens of millions annually to abortion providers like Marie Stopes International, and it still refuses to condemn China’s coercive policies even as it continues its own “sexual and reproductive health” practices in China.

Of the many things wrong with the utterly destructive abortion-as-women’s-health-and-rights movement is that it has corrupted practically the entire international aid and development industry. It is clear that most of this work began as a just response to extreme poverty and disaster relief in the developing world. It is also absolutely true that women have been treated as second class citizens – and worse – in much of the world, and in many places still are treated unjustly in a systematic way.

There is so much for people of good will to agree upon, and so much to be done. Yet the opportunity for consensus is dashed when the lie that the murder of babies in the womb is declared a “human right” or a matter of healthcare, and an entire industry is reshaped to propagate this lie. The Trump Administration, in another decision worth celebrating, reinstated and expanded the Mexico City Policy soon after taking office. So when it is reported that the funds originally slated for UNFPA will go to USAID instead, our concerns are somewhat mitigated, though not completely erased.

What happens to an industry like the multi-billion dollar “aid and development” industry when it internalizes the idea that the killing of innocents and the suppression of population are a matter of “health” and “rights?” Think about that. Over several decades, the legitimate work of mobilizing large amounts of resources to help those in desperate situations slowly became about reducing fertility, to the point where today even a great deal of the most laudable work has population control strings attached.

It is good that funding has been cut off from UNFPA and that the newly strengthened Mexico City Policy is set up to cut off those NGOs who perform or promote abortion. But after decades of population control as a priority, this laudable policy is just a start. Greater progress will be made when the anthropology is fixed—that is, when the truth about the human person is more thoroughly integrated into the priorities, practices, and especially people, who work in USAID and the web of organizations devoted to aid and development.

There is an insightful new documentary from Acton Media called “Poverty, Inc.”, which lays bare the clear failure of the aid and development industry to bring true development to those who need it most. The way the industry is now structured, the incentives are to build and join well-funded NGOs, very little of whose massive budgets “trickle down” to the poor. They are built to perpetuate themselves, which requires the continuation of poverty, rather than its alleviation. Even if you grant that those involved have good intentions, few in the industry seem to want to talk about where the money ends up, and who really benefits.

It’s the anthropology, stupid. The reason we oppose the UNFPA and other “population” concerned entities is that they depersonalize billions of persons, seeing them as a problem to be reduced, rather than as individuals possessing innate dignity, made in the image of God. No rebranding can hide their priorities, and using women’s legitimate health and justice concerns as cover to eliminate the poor is why so many do not trust the UNFPA and the industry it helps to lead.

By all means, let’s support development: Authentic, integral human development, as the Church calls it. But let’s also not get so enamored with the United Nations and the elite philanthropy industry that we set aside what is authentically Catholic and Christian in our approach to development. That is, we cannot set aside the Gospel because we cannot set aside Jesus Christ. He is what people really need. That He, along with all relevant Church teaching, were left out of the debate at the recent “Biological Extinction” conference held by the Pontifical Academy for the Sciences is a great scandal, and could have terrible consequences for those who look to the Catholic Church to be the voice of the voiceless. It featured well known population control advocates, including the discredited Paul Ehrlich, who later expressed his great pleasure that everyone at the conference, including the president of the Population Council, agreed that birth control was the key to alleviating “biological extinction.”

They see “population” — a threat to the world. The Catholic Church sees persons — made in the image of God, each with potential to build communities and change the world for the better in just societies based on the law of nature and nature’s God. These views are irreconcilable, and the Church must not be afraid to say so.