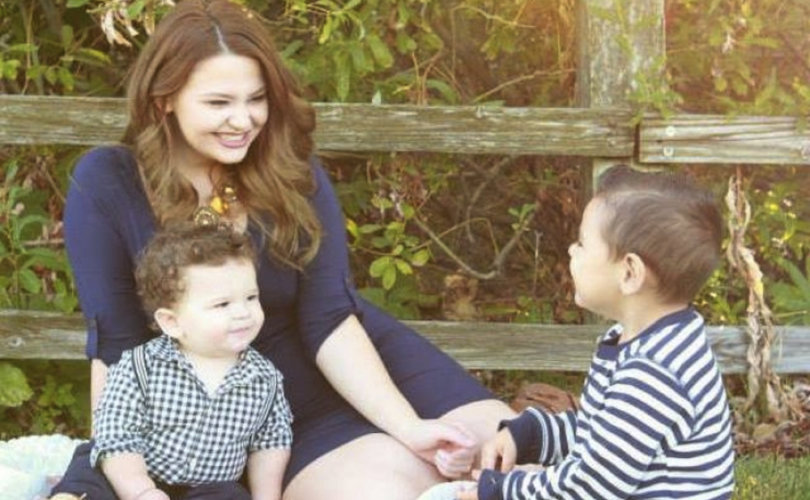 Rebekah Buell with her two sons. The youngest, Zechariah, was rescued from abortion through Abortion Pill Reversal.

September 12, 2017 (PregnancyHelpNews) — If there was any doubt about California’s status as the nation’s standard-bearer for abortion, a letter sent September 5 by the state’s Board of Registered Nursing should clear that up in a jiffy.

Acting at the behest of abortion activists in the state legislature and online media, the Board of Nursing reversed its decision from just a month prior, sending Heartbeat International a letter to demand that the pro-life pregnancy help network “cease and desist” offering nurses continuing education units (CEUs) for Abortion Pill Reversal classes.

Over 350 doctors nationally have joined the Abortion Pill Reversal network, while 300 mothers have successfully rescued their children from abortion through the medical intervention (see here and here for examples), which introduces an emergency and ongoing progesterone treatment to counteract the first of two pills in the chemical abortion (RU-486) process.

The Board’s sudden reversal seems a direct effort to deny a woman access to her own choice during an unexpected pregnancy, Heartbeat International president Jor-El Godsey said Monday.

“This is a naked political assault on a procedure that is the very essence of choice,” Godsey said. “To oppose Abortion Pill Reversal is not only to deny the science and reality that there are children living today because of it, but it’s to materially keep a woman from even so much as knowing she has the option to potentially stop a chemical abortion once it has begun. This is the abortion lobby taking choices away from women.”

The letter, postmarked September 5 and received September 11, gives Heartbeat International five days from receipt of the letter to remove CEU credit from its online courses, offered online through the Heartbeat Academy.

It also marks a 180-degree shift from a letter the same Board sent Heartbeat International and sister pro-life network, National Institute of Family and Life Advocates (NIFLA), approving both organizations’ status as a continuing education providers.

The original letter, sent July 28, 2017, followed a 17-month period where the Board reviewed hundreds of pages of submitted documentation starting in February 2016. No subsequent paperwork or filing of any kind was requested prior to or cited in the most recent letter.

While Heartbeat International is complying with the letter’s demand to remove CEU credit from its online Abortion Pill Reversal courses, the courses will still be activated while the organization appeals the Board’s latest decree.

“How the Board of Nursing can play politics with the lives of women and children is beyond me,” Godsey said. “If there were any hint of noncompliance on our part, it’s clear a 17-month audit would have uncovered it. What could possibly have changed in one month’s time?

“Meanwhile, nurses across California and the nation could be presented with patients who want to reverse their abortion decision before it is too late, and this new mandate prevents nurses from being prepared to serve their own patients.”

A hunt for non-compliance

After pushing the Board to audit Heartbeat International — a nonprofit that serves 2,200 affiliates worldwide and operates a 24-7 pregnancy helpline, Option Line — Hill then proposed legislation that was eventually adopted by the state and signed into law in 2016 by Gov. Jerry Brown that beefed up the requirements for nursing CEU providers.

That law, however — which mandated that courses rely only on “generally accepted scientific principles” — was insufficient to wield against the Abortion Pill Reversal courses. Instead, the Board cited California Code of Regulations (CCR) Section 1456 in its demand letter to Heartbeat International.

Curiously, the section cited by the Board pertains only to the need for courses to be “relevant to the practice of nursing,” differentiating between courses that deal with patient care (direct and indirect) and those which, “deal with self-improvement, changes in attitude, financial gain, and those courses designed for lay people … ”

Fitting that definition, Heartbeat International only offers CEU credit to nurses for Abortion Pill Reversal courses it offers online and at its annual conference.

A coordinated effort to steal choices

The Board’s flip-flop fits into a larger pattern of the state of California’s targeting of political opponents who pose an alternative to abortion or otherwise threaten the abortion industry’s marketplace stranglehold.

In addition to pursuing charges against David Daleiden and Sandra Merritt in response to their three-year undercover work of exposing Planned Parenthood and others’ complicity in the trafficking of body parts harvested from aborted babies, the state of California also launched an assault on community-funded pro-life pregnancy centers and medical clinics with a 2015 law that could be challenged at the Supreme Court as early as this month.

Earlier this month, a federal judge dismissed a lawsuit filed by several California churches that are challenging the state’s Department of Managed Health Care requirement that all insurance companies cover the cost of their employees’ abortions.

“At this point, it’s hard to say we’re surprised by any effort to prop up the failing abortion industry,” Godsey said. “But this is a direct effort to steal a mother’s choice right out from under her. Women and men become nurses to help and serve others, but politically driven moves like this keep them from accomplishing their compassionate, God-given mission.”