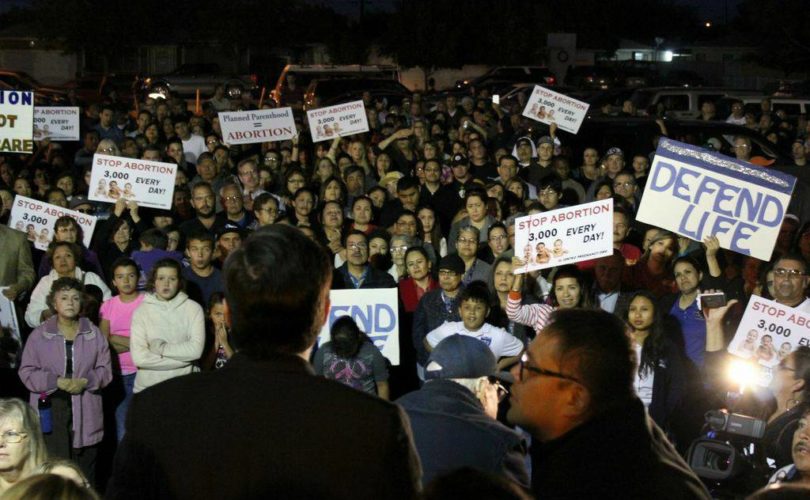 March 20, 2015 (STOPP.org) — Something big is stirring in El Centro, California. Planned Parenthood is trying to open a killing center there, but the community is rising up in opposition. And it is rising up in huge numbers. More than 2,000 people attended a recent city council meeting to object.

People are rising with passion to avert the slaughter of the tiniest members of the largely Hispanic population—not only in El Centro and Imperial County, but in the neighboring city of Mexicali in Mexico, where the population is 16 times that of El Centro. Abortion is illegal in Mexicali, but it is a very short jaunt across the border to El Centro.

The new El Centro Planned Parenthood center is just a little more than an hour’s drive from overwhelmingly pro-life Yuma, Arizona, where Planned Parenthood recently shut down its brick and mortar center due to a lack of clientele. It left behind a community organizer to promote PP sex ed and attempt to negotiate an environment that will one day accept Planned Parenthood back into the community.

The amount of total Planned Parenthood income from government sources reaches even higher in two California affiliates, where up to 83 percent of total funding comes from government sources. This huge expansion in government funding has resulted in a proliferation of Planned Parenthood facilities in California, even as the number of PP facilities continues to dramatically decline across the nation.

In El Centro, the Hispanic population exceeds 81 percent. The church-affiliated population of the Imperial Valley is 83 percent Catholic. The people of El Centro identify almost entirely as pro-life, according to Marty Ellett, who is spearheading efforts to oppose Planned Parenthood in El Centro. Crowds continue to swell in opposition to Planned Parenthood as people from diverse faiths work together in opposition to the expansion.

STOPP’s Rita Diller connected with Ellett last month. He said that Planned Parenthood opened an office two years ago in El Centro. The El Centro office was an administrative office that was obviously set up to advance the PP agenda and stealthily launch the abortion center that now is waiting for clearance to be able to transfer women to the local hospital.

According to Ellett, in order to recruit the specialized nurses who are allowed by law to abort babies in California, Planned Parenthood offered $40,000 sign-on bonuses.

We send our thanks to Marty Ellett, Christ Community Church and its pastors, Father Edward Horning of St. Mary’s Parish in El Centro, and all those who are working hard to stop the Planned Parenthood abortion business. Truly this is a spiritual battle, as highlighted by a Planned Parenthood supporter at the March 3 city council meeting who yelled “All hail Satan” as he was removed from the room. We pray that all the area churches will make a strong stand in this spiritual battle for the hearts, minds, lives, and souls of the young people and families of the Imperial Valley and Mexicali area.