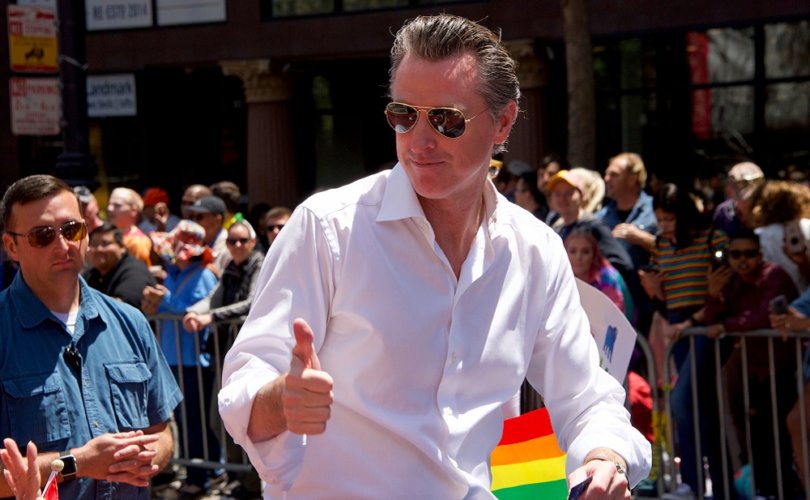 September 10, 2019 (American Thinker) — How deranged and thoroughly despicable are the California and national Left? How depraved is Governor Newsom? They and he are a collective blight on the nation. They are not alone in their immorality, in their contempt for civilized society. Democrats, who have long led their hostage cities and states to inevitable decline, are absolutely to blame for the destruction of their disintegrating realms. Candidate Barack Obama promised to “fundamentally transform America,” and he succeeded in doing just that. He pushed the Democratic Party from what was a semblance of JFK liberalism to abject Alinskyite hate-America radicalism.

The Democrats now champion socialism, restrictions on free speech, post-term abortion, and the doxxing and blacklisting of those with opinions they find unacceptable. They support the abrogation of the Second Amendment. In their view, only criminals should and will have guns. And indeed, they will — like the man who killed seven people in Odessa, Texas, who failed the background check but still acquired a gun.

The more people the maniacs kill, the better they think their goal of gun confiscation will be achieved. Any sentient person with common sense knows that this is exactly wrong. The Left believes that conservatives who support the Second Amendment, and the rest of the Bill of Rights, are knuckle-dragging Neanderthals, incapable of reason. They think they will soon fall for their gun control nonsense. They will not. Maine is now the safest state thanks to its “anyone can carry” law.

Governor Newsom of California has reached into the gutter for a new and obscene low. So dishonorable is this man that he signed into law a bill that “struck down a more than century-old law that required any able-bodied persons 18 years of age or older to assist a police officer who requested help during an arrest.” San Francisco, Newsom's former mayoral gig, just named the NRA a terrorist organization. Next on their agenda will be to designate the U.S. military as a terrorist organization. That is how much the Left hates the country that has made leftists wealthy and comfortable and put them in positions of power to control the lives of others.

Newsom, and the rest of the Democrat governors and mayors who destroyed their own states and cities, have not only ruined the municipalities that they control, but destroyed countless lives — namely, of those who barely subsist on the streets of these cities: Los Angeles, San Francisco, Sacramento, Seattle, Baltimore, Chicago. (Chicago and Baltimore are the murder capitals of the nation. Both have among the strictest gun control laws in the nation.) They willingly promulgate the drug use of their homeless (they pass out free syringes) and seem to tolerate the vast homeless encampments and all they entail: discarded needles, public defecation, crime, disease — in short, the destruction of the cities they've been allowed to take over and ruin.

It is not an exaggeration to say that today's Left is a scourge upon this nation. No one who values civility and respect for our law enforcement men and women should cast a vote for any Democrat, anywhere. They pander, promise, and lie. They defend Antifa! And now they openly and officially oppose our law enforcement personnel.

Every Democrat presidential candidate opposes ICE, the agency tasked with stemming the tide of illegal immigration. All of them have implicitly admitted their contempt for our police and sanctioned violence against them. They clearly value illegal migrants over citizens. Newsom's bill is effectively an anti-police bill. It is difficult to imagine a moment in the past in which any citizen would not have rushed to the defense of a police officer in need of help. They were, and still are, our heroes, men and women who sign up to risk their lives to defend us.

The American Left is pushing to transform America into a fascist/communist country. Climate hysteria is just one avenue leftists have chosen to deceive us. Frighten the public, disarm the public, control the public. Is there an upside to this? Not in a million years. Ask the Jews of Germany in the 1930s–1940s, or in New York right now. Ask the citizens of Venezuela, Cuba, or Hong Kong. The Founders knew exactly why the Second Amendment is so vital to our liberty.

The American Left, for the moment its depravity exposed by Gavin Newsom, is a disgrace. These people are anti-American. This is now a discernible fact. The Left under President Obama weaponized our law enforcement institutions, including the FBI, DOJ, and IRS. Young people are now taught that law enforcement, every branch of it, and the men and women who risk their lives to protect us are the bad guys to be “milk-shaked” and mocked at every opportunity, and the criminals, illegal or not, are the good guys, always the victims. A San Francisco court just overturned the last charge against the man who killed Kate Steinle!

The Left has turned our nation's civil structure and our legal system upside-down, and leftists are proud of themselves for doing it! And they are so deluded that they think they are virtue-signaling heroes when in fact they are enemies of Western civilization.

The oft-cited quote by Lincoln was prescient: “America will never be destroyed from the outside. If we falter and lose our freedoms, it will be because we destroyed ourselves.” The Left is working hard to do just that, destroy us from within. President Trump is the savior who has selflessly thrown himself upon the pyre of their fury to save the nation. No wonder they hate him so much.