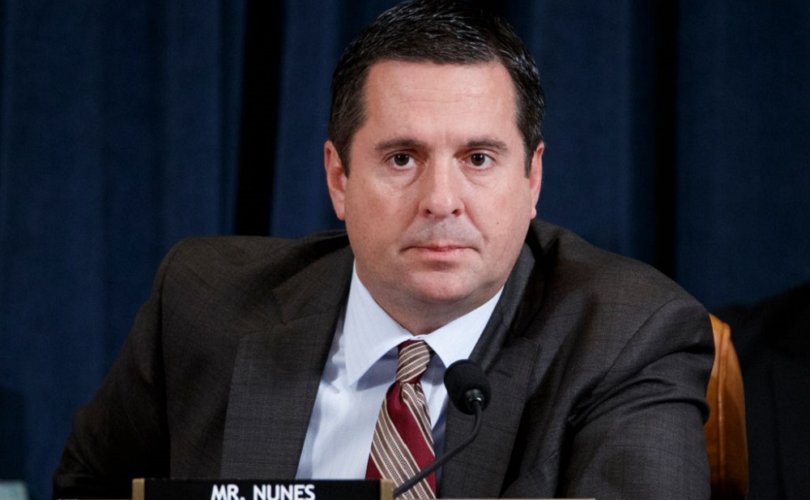 While much of the nation was impressed with President Trump's attention to America's farmers, Nunes is telling constituents that the tide has finally turned on their farmers' long Democrat-caused drought. That's based on President Trump's signature last week on a bill to provide California's beleaguered farmers with water, build storage for them, and put a stop to the junk science that buttresses the whole problem. Here was his email to constituents:

While campaigning in 2016, then-candidate Trump promised that the Central Valley's water supply would no longer be held captive by radical environmentalists. This week, both President Trump and Secretary of the Interior David Bernhardt visited the Valley to make official the Trump administration's plans to return water to the Valley.

On Wednesday, President Trump signed a second presidential memorandum to formally adopt policies that will deliver more water to the Valley. In addition to implementing new biological opinions that govern how much water flows through the Sacramento-San Joaquin Delta, President Trump directed the Secretaries of the Interior and Commerce to develop more water storage infrastructure so that Valley farmers, families, and communities can have a more bountiful and reliable water supply. Since before my election to Congress, I have fought to reclaim the water that California's radical environmentalists have flushed out to the Pacific Ocean. With this week's actions, President Trump has turned the tide in California's decades-long water wars.

Along with other Republican congressmen, I joined President Trump for the signing ceremony.

This, coming from him, a dairy farmer himself, is dramatically good news. Nunes was the original voice crying out in the wilderness about California's disastrous water situation. We often think of him in his role as the ranking member on the House Intelligence Committee, but his original cause was always the water. He wrote this book about the environmentalists' efforts to shut down America's most important land for food production. Here was his hugely popular account of the backstory that appeared in Investor's Business Daily in 2015:

In the summer of 2002, shortly before I was elected to Congress, I sat through an eye-opening meeting with representatives from the Natural Resources Defense Council and several local environmental activist groups. Hoping to convince me to support various water restrictions, they argued that San Joaquin Valley farmers should stop growing alfalfa and cotton in order to save water — though they allowed that the planting of high-value crops such as almonds could continue.

Then, as our discussion turned to the groups' overall vision for the San Joaquin Valley, they told me something astonishing:

Their goal was to remove 1.3 million acres of farmland from production. They showed me maps that laid out their whole plan: From Merced all the way down to Bakersfield, and on the entire west side of the Valley as well as part of the east side, productive agriculture would end and the land would return to some ideal state of nature. I was stunned by the vicious audacity of their goal — and I quickly learned how dedicated they were to realizing it.

He knows all their tricks. And now he's finally closing in on them. Just as he thwarted the Deep State with digging to the truth about the foundations of the Russia hoax, how he's marshaled the feds to go around California's wasteful greenies, who flush millions of gallon of pure clean water into the sea in the name of saving the delta smelt, a policy that has turned the lower San Joaquin valley into a wasteland.

And speaking of the Russia hoax, Nunes is on fire here, too.

He's also telling Fox News's Harris Faulkner he's suing the Washington Post, based on its habitual lies concerning his supposed visits to the White House. These, he says, are visits never made. Now he's in hot pursuit.

That's another victory for him coming up. Like President Trump, Nunes racks up a lot of wins. It was a good week for him. We can only wish he has many more.