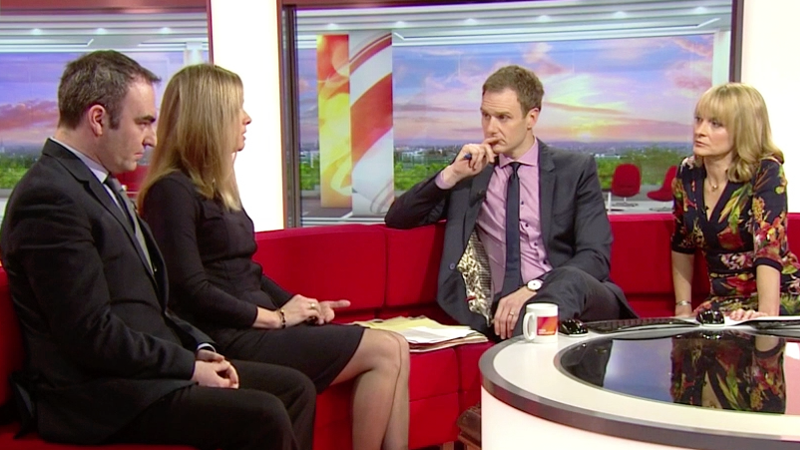 January 20, 2017 (The Christian Institute) — A pro-life campaigner has defended the sanctity of all human life on national television, in the face of calls to extend embryo experimentation.

They were asked for their response to calls by some scientists to extend embryo experimentation from the current limit of 14 days to 28 days.

Dr McCarthy told BBC presenters Dan Walker and Louise Minchin that the 14-day limit has always been “arbitrary” and that there is a continual push to “dehumanise the embryo”.

Commenting on the nature of embryos, he said: “What we’re talking about is a new human being from conception”.

Dr McCarthy criticised the “mass production” and “quality control” approach to embryo research, saying that human beings are “created through a production process and they are treated as products”.

When Alison Campbell claimed that embryos are treated “with respect” by her organisation, McCarthy responded:

“You say that they’re treated with respect but they are destroyed in their hundreds of thousands and they are referred to as spare or supernumerary.”

“I think there should be a protection for all human life from conception. However, I do think obviously if you have a bad policy in place, it can be made worse, and I think this is an attempt to do so.”

Last month, the UK’s fertility regulator dismissed calls to extend the limit on human embryo experimentation, for the time being.

Outspoken fertility scientists had called for the current 14-day limit to be doubled, saying that this would aid research into miscarriage and other genetic abnormalities.

But the Human Fertilisation and Embryology Authority (HFEA) said there is no rush for a change to the law.

The calls had sparked criticism in the press, as well as from pro-life campaigners.

Commenting in The Times, Melanie Phillips said the current law is a “slippery slope”.

She added that treating embryos as “merely a bundle of cells that is disposable is to instrumentalise and dehumanise not just the embryo but ultimately all of us”.

Reprinted with permission from The Christian Institute.