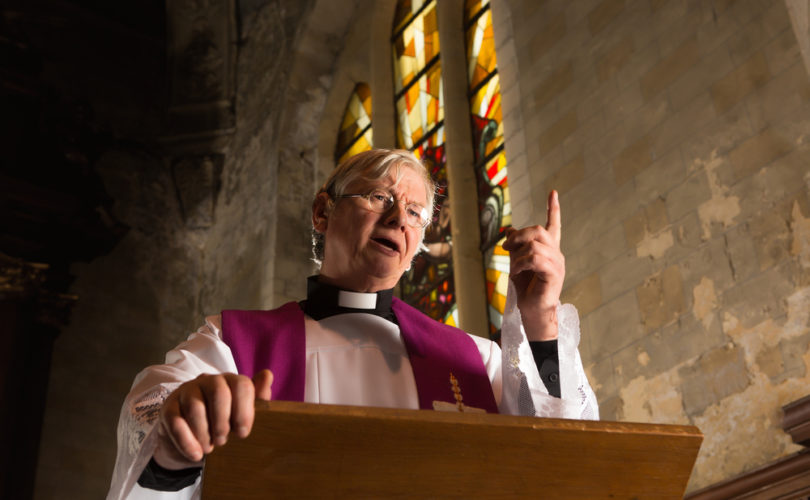 April 2, 2015 (CrisisMagazine.com) — When was the last time anyone heard a sermon that condemned the evils of fornication, or adultery, or cohabitation, or divorce, or bearing children outside wedlock (let alone homosexuality)? Controlling these sins is a core Christian value. At one time a preacher could be expected to devote extended attention to these sins. And he could be expected to condemn them unequivocally. Yet today, even as the social and economic fallout from precisely these practices becomes ever more glaring and serious, pastors and priests seem ever more determined to avoid discussing them.

Of course, the dowdy old parson long ago became the stuff of caricature, ranting on about unspecified “wickedness.” And since no pastor wants to be seen as old-fashioned, and most want to be modern and appeal to the ubiquitous cult of youth, one never hears much today about the sins of illicit sex. Indeed, churches that consider themselves highly orthodox or biblical or traditional or conservative or evangelical—those described by themselves and others as “fundamentalist”—even these churches avoid the problem of runaway sexual freedom. Most Christian magazines and newspapers do not publish articles about it and gatherings of clergy do not discuss how to control it. No church today would dream of admonishing or reproving, let alone excommunicating a member because of sexual misconduct.

Yet ever more conspicuously, it is precisely these sins that are wreaking havoc throughout our society.

All around us we can see—if we are willing to open our eyes—the social consequences of uncontrolled sex. The sexual decadence of popular culture—in music, television, and videos—is only the most obvious manifestation, providing material for endless and often pointless moralizing.

But beyond the lamenting and bemoaning are consequences that are concrete and serious. The vast proliferation of single-parent homes is having devastating consequences on our society, economy, and politics. The epidemics of cohabitation and runaway divorce have left millions of fatherless children on the exploding welfare and foster care rolls and spread crime and substance abuse and truancy throughout our communities. These problems are now bankrupting taxpayers and future generations with a “financial crisis” that is attributable almost in its entirety to welfare spending and its multiplier effects in crime and social anomie, while driving governments to ever more authoritarian measures to slake their insatiable thirst for revenue.

The tyrannical side of this orgiastic culture is now becoming too glaring to ignore, despite years of denial. For the inevitable corollary to licentious indulgence is authoritarianism. This is now plainly manifested in a political agenda pushed by the same sexual radicals who promote the hook-up culture: Young men are now routinely railroaded before campus kangaroo courts on obviously fabricated accusations of “rape,” “sexual assault,” “sexual harassment,” “sexual misconduct” (no clear distinctions separate these vague terms), sexual this and sexual that. In the regular courts, men are imprisoned for decades on rape accusations that are known to be false. Parents regularly lose their children through spurious accusations of “child abuse” that are never proven in any court. Fathers are incarcerated without trial by divorce courts for patently trumped-up accusations of “domestic violence,” or for simply trying to see their own children, or for criticizing judges.

The response of the churches to all this has been silence. Christians, by and large, do not know what to make of this authoritarianism. They are afraid to question accusations of sex crimes, but they also know that this agenda is not theirs. Terrified of being seen to defend “rapists,” “child abusers,” “wife beaters,” and “deadbeat dads,” the church sits mute in the face of what is claimed to be a vast epidemic of sex crimes. Tempted to play it safe by perfunctorily endorsing the purveyors of the new indulgence, the church sides with falsehood against truth.

Now in turn, Christians find themselves being accused of “hatred” and “bigotry” and threatened with punishment for criticizing the homosexual agenda by the same lobby of radicals. As Martin Niemoeller warned of a similar ideology, no one speaks out for us because we did not speak out for others.

Truly diabolical is how this neglect turns back on us and corrupts us too. Because we fail to control the sin, the sin controls us. By refusing to confront the sin on God’s terms, and instead relabeling it with terms we find easier and safer to confront, we allow the sin to enlist us as its agents. This takes the form of cheap moralizing and self-righteous posturing: refusing to confront the guilty, we join witch hunts against the innocent.

For what the radicals have done is to redefine sin. Rather than the biblical definition set forth in clear biblical language, we now have ideologically redefined, government-approved definitions formulated in politicized jargon. Sexual indulgence is no longer a sin against God; it is now a crime against the leviathan state.

Pastors nowadays are much more likely to couch sexual sins in the form that has been redefined and politicized by radical secular ideology. To disguise their own irrelevance, they join the mob to register their politically correct outrage at “sexual harassment” and “domestic violence.” (I have never heard a pastor preach at any length against the “hook-up” culture, but they will endorse the fabricated and discredited feminist claims of a “rape culture,” only to leave themselves looking foolish when the charges invariably prove false.)

Pastors who parrot this jargon cannot possibly know what these terms mean, because no one knows what they mean. I have been studying them for two decades and published articles on these topics in refereed academic journals, and I do not know what they mean, because it is precisely the purpose of these terms to be so vague as to mean anything. They are devised intentionally to circumvent the clear language that the law uses to define criminal assault and safeguard the innocent with vagaries whose only possible purpose is to criminalize heterosexual men and Christians with flexible accusations that no one really understands but everyone is terrified to question.

By contrast, pastors should know precisely what constitutes fornication and adultery, because the Bible tells them. But it is safer to preach about “sexual harassment” than about fornication, because clergy are often more frightened of feminists and functionaries than they are of God.

Thus Christian faith itself is gradually transformed from theology and morality into political ideology. “Fornication” and “adultery” were biblically defined sins committed by two people and punished by God and the moral sanctions of the community. “Sexual harassment” and “sexual abuse” are quasi-crimes committed only by the man and punished by the state gendarmerie. The preachers know whom it is safe to criticize.

The effect is to transform them from preachers of God’s Word into adjunct political prosecutors.

Christian scholars churn out pointless tracts on ever more esoteric points of theology and philosophy. But the church’s crisis today is not imprecise or unsound doctrine. The church’s failing now is lacking the courage to apply its doctrine in the face of a defiant and politicized sexual immorality.

Why do pastors now evade the basic sins that plague every congregation and the most critical sins that threaten to overwhelm our society? Why do they stand mute at the very suggestion that they should do so or mumble unconvincing excuses and evasive weasel words, before nervously changing the subject or walking away? (Try it.)

The answer is that they are frightened. No pastor or priest wants to touch the subject of sexual sin, because it will anger the liberal women who control most congregations. This is not meant as condemnation; simply a recognition of reality. The same dynamic produces similar silence from our other watchdogs and gadflies: journalists and university faculty members.

Sexual freedom is the inevitable corollary to the feminization of the church because radicals understand that sexual freedom transfers power to those who can use a sexual identity as leverage: politicized women and homosexuals. “My generation let all of this nonsense of sexual confusion, radical feminism, and the breakdown of the family go on, not realizing that we … have gravely wounded the current generations,” says Cardinal Leo Burke. “The Church has not effectively reacted to these destructive cultural forces” and has instead “become too influenced by radical feminism.”

And the first casualty of feminization is courage, the courage that is demanded foremost of men, including clergy. This is why Christian faith and radical sexual ideology are today on a direct collision course, and why the radicals believe Christian faith must lose.

In The American Conservative, Rod Dreher openly questions whether Western Christianity itself can survive the revolution in sexuality, as does the former Archbishop of Canterbury in the Daily Telegraph. The question demands an answer one way or the other.

We need to ask what remains that is still Christian not only about Western institutions—that seems clear—but about the rest of us.

If we have lost our will to enforce sexual morality in our congregations, if pastors will not defend the very marriages that they themselves have consecrated—and the rest of us the marriages we ourselves have witnessed—against involuntary divorce or enforce the discipline on cohabiting couples, then in what sense does Christian faith still have any practical meaning in our common lives? We complain that Christianity is being “banished from the public square,” but we can hardly be surprised when we ourselves have lost the stomach to defend our own parishioners, congregations, and communities against violations of God’s law, whether emanating from our ecclesiastical or secular polities.

For the rest of us are no more courageous than the clergy. Few of us will express moral disapproval when we find friends cohabiting or committing adultery or inflicting unilateral, involuntary divorce on their spouses and children. And therefore few of us speak out when the state gendarmerie, filling the vacuum that we have left, imposes the order that we refuse to enforce in its own way, by taking away our brothers and sisters in handcuffs.

“Religion is central to sexual regulation in almost all societies,” writes homosexualist scholar Dennis Altman. “Indeed, it may well be that the primary social function of religion is to control sexuality.” Abdicating this responsibility to regulate it in the name of God leaves us vulnerable not only to social anomie, but also to those who will step in and regulate it for their own purposes, imposing criminal penalties and rationalizing their measures by invoking various alternative, usually politicized theologies. “Ironically, those countries which rejected religion in the name of Communism tended to adopt their own version of sexual puritanism, which often matched those of the religions they assailed.” Today’s sexual revolutionaries are simply refining the Bolsheviks’ experiment.

Perhaps it is time that we have the courage to admit that the dowdy old parson who preached against illicit sex was a wise and sensible man all along and a more faithful Christian than those of us who made endless fun of him. Perhaps we should start encouraging the self-control that he demanded and the courage he displayed. Perhaps it is also time to regain some respect for the wisdom of elders and forsake the Pinocchio world where youth (along with its urges) is worshipped as an achievement in itself, while elders, whom the Bible sets as authority figures, are expected to hold their tongues.

Perhaps it is also time to discard the politically obligatory weasel words (“No one wants to return to the bad old days when…”) and accept that open-ended sexual freedom puts us on a trajectory that will only spread chaos, ruin more lives, destroy our freedom, and weaken our civilization, until we summon the courage to speak the truth.

In short, perhaps it is time to accept that, here too, the church does not have to change with the times and that it needs to be the “rock” that Christ mandated it to be.