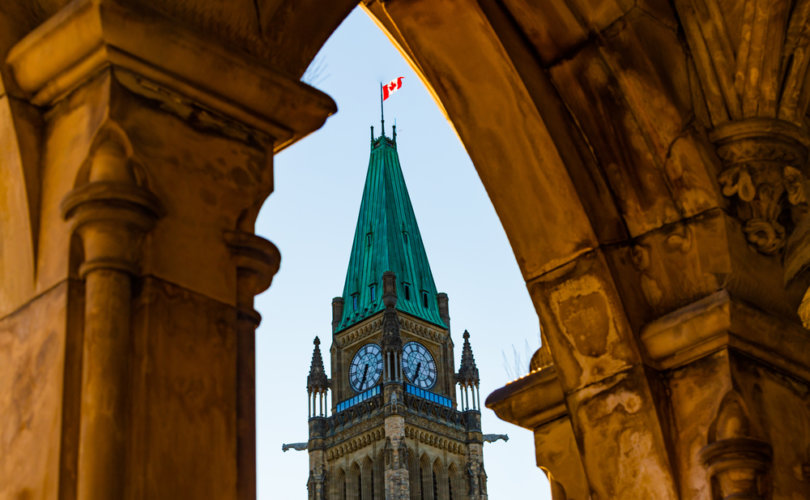 Peace Tower at the Parliament of Canada in OttawaShutterstock.com

October 28, 2020 (LifeSiteNews) – Two of my friends at a recent meeting spoke strongly about the separation of church and state in our country, Canada. What they didn’t realize was that Canada has a state religion. Our state acknowledges God in our Charter of Rights and Freedoms, which has become our state bible. It acknowledges God, albeit a do-nothing God, a God that makes no demands, a God who lets you do whatever you like.

Like every religion, our state religion has beliefs, values and rules relating to sexual conduct that it enforces. Our Canadian beliefs could be summed up by saying, “anything goes among consenting adults, and consenting children, too, if close in age to each other”.

Like all state religions, Canada uses the state to promote its lifestyles and the acceptance of all sexual practices. The nine popes on the Supreme Court make laws requiring the acceptance of sexual conduct, and our government enforces this acceptance through Human Rights Commissions that act as a modern-day Spanish Inquisition. Our state religion, much like the ancient Aztecs, believes in child sacrifice through abortion, considered a natural accompaniment to promiscuous sex.

Every aspiring politician is compelled to worship this sexual culture through participation in gay parades. Justin Trudeau was in four of them the year before he became prime minister, and now uses the government to finance them.

With the approval of mainstream media, our governments preach “diversity” and “tolerance”, but they will not tolerate those that embrace “that old-time religion”, namely, Christian sexual morality. Diversity only goes so far. They will not tolerate anyone that has different sexual values than those exhibited at gay parades.

It should come as no surprise, then, that our Prime Minister (a self-professed Catholic) cannot tolerate employers who fail to acknowledge a belief in abortion, the value of same-sex sexual activities, and the right of all people to choose whatever sex they wish to be. This is 2020! One must agree to believe in the above to qualify for a government subsidy to hire a summer student.

Happily, we pensioners are not yet required to deny our faith in order to qualify for old age security and healthcare.

Before you apply for full-time work with the federal government, you should view the Gender-based Analysis test that the Government of Canada is implementing. Some (or all) employees are required to take the test designed by pro-abortion (and government-funded) Status of Women Canada (SOW Canada) to ensure you are as confused about gender as they are. Look it up here. You and your children will not advance far in the civil service without first acknowledging that God did not make all people male and female. You can pick your own sex.

SOW Canada is a government tool used to evangelize and convert all people to Canadian sexual beliefs.

Christians know the importance of teaching children their faith and sacrifice to fund their own schools. Governments also know the value of teaching children their values and want to use schools to indoctrinate children into our sexualized culture. They are working to make Gay Clubs normal in all schools that receive public funding, even Christian schools. In Europe, homeschooled children have been removed from homes that did not stick to the sexualized curriculum.

Ever since the time of the Romans, Christians were marked by their commitment to charity and chastity. Our enemies know that, too. For that reason, we can expect an even bigger effort on the part of the government and media to inculcate government sexual values onto our children. They know that a promiscuous youth will intuitively know they do not belong in God’s sight or in a Christian church – but do our Christian leaders know that?

Our media and misguided compassion resulted in many Christian leaders embracing the sexual values of our culture. Christians ought to embrace chastity and connect sex to the procreation of children, not entertainment.

Many Christian churches are struggling to attract teens and young adults to the Christian faith. That is because our churches are not engaged in teaching chastity as part of the good news. They skip to the easy stuff, stuff that wins approval within the culture.