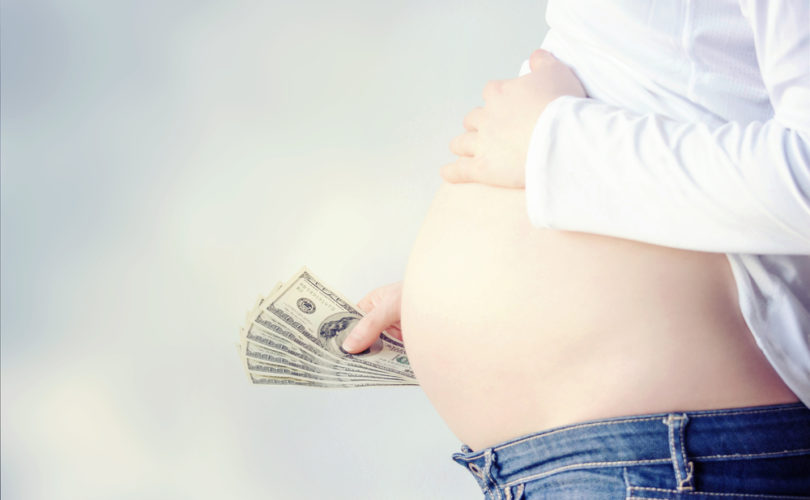 November 28, 2018 (REAL Women of Canada) – Canada has become a delightful place for foreigners to have a child born to them through surrogacy. Almost half of children born to Canadian surrogate mothers in British Columbia are for parents who live outside Canada. Data from other provinces is not publicly available.

This service is particularly important to those many people who are unable to make such arrangements in their own country where surrogacy is prohibited. These countries include Japan, China, many European and predominantly Muslim countries.

Other countries, such as the US, South Africa, Israel, India, Nepal, Thailand and Mexico ban international surrogacy. Happily for foreign couples, Canada permits surrogacy for foreigners and allows surrogacy even for single persons and for same-sex couples. Only a few jurisdictions, such as Greece, Ukraine, Russia, Georgia and a few U.S. States are as open to foreign surrogacy and are as co-operative as Canada.

There is another delightful aspect for a foreigner having a child by surrogacy in Canada. A Canadian surrogate mother is entitled to publicly funded health care throughout the pregnancy, during the delivery and after the birth. It is irrelevant whether she is carrying the child for herself or for residents of a foreign country. Besides, our neonatal care is top notch and is also publicly funded.

Pregnancy costs and delivery costs, even for an uneventful pregnancy, are considerable. The average uncomplicated birth in Canada rings in between $3,000 and $6,000 depending on whether it is a vaginal or a caesarean delivery. Complications in pregnancy can increase this figure alarmingly. Neonatal care would also be pricey if one had to pay for it from one’s own pocket. For instance, according to the Canadian Institute of Health Information, care for a baby born at 29 weeks weighing less than a kilogram, costs an average of $91,946. Further, a Canadian woman carrying a foreigner’s child by surrogacy, who is employed at the time of her pregnancy, may also qualify for employment insurance benefits to a maximum of $6,500.00 after the pregnancy. It’s a nice enticement for a Canadian surrogate mother.

There is a slight problem in that Canadian legislation prohibits paying the surrogate mother for her services. But this only applies to payments within Canada. There is nothing to prevent a money transaction for her services in another jurisdiction. It’s just a short hop across the US border to a US state which permits foreign surrogacy to complete such a financial transaction.

Canada is efficient about granting legal parental rights. It varies by province, but generally speaking, parents of surrogate children can be declared legal parents without a lot of hassle in just a few days, and can be issued a birth certificate within weeks. Another convenience is that a child born in Canada, even if his/her parents are foreign residents, has a right to Canadian citizenship, and a passport can be issued for that child in short order. That child is then free to re-enter Canada at any time, and later sponsor his/her parents.

It is little wonder that Canada has become the “go-to spot” for foreign surrogacy arrangements. After all, the Canadian taxpayer pays the costs.

On October 12, 2018 Health Canada announced new regulations under the 2004 Assisted Human Reproduction Act. These proposed changes do not include the prohibition of foreign surrogacy arrangements in Canada.

Public consultations on the liberalization of surrogacy will be held between October 27, 2018 and January 10, 2019. Canadians can email, use the online questionnaire or send a letter to:

Email and questionnaire input can be submitted at:

Please request that surrogacy by foreign couples be prohibited in Canada.

In person consultations are planned in Vancouver, Winnipeg, Toronto, Montreal and Halifax. Further information is available at the above Health Canada link.

The consultations on the proposed regulations are to CLOSE January 10, 2019.