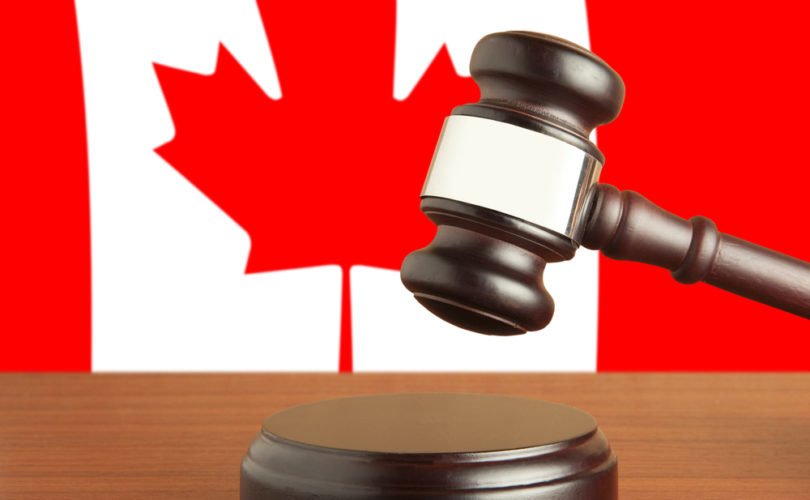 February 20, 2015 (LifeSiteNews.com) –The Supreme Court of Canada’s recent decision in the Carter case to legalize assisted suicide and reverse its 23-year-old ruling in Rodriguez demonstrates for many conservative observers the evils of judicial activism.

In a magisterial piece in the National Post, Andrew Coyne said that the law against assisted suicide was only one casualty: another was “judicial restraint, the fading notion that the courts, in interpreting the law, should be bound by … something — the written text, the historical record, precedent, logical consistency.”

Now judges have become lawmakers, responding, like them, to shifting public opinion. But unlike legislators, they are appointed, not elected—and for life.

A well-positioned but anonymous legal practitioner echoed to LifeSiteNews: “It wasn’t the decision itself, which I expected, that was so troubling about Carter, it was how lacking in depth the legal reasoning was. A law should be a matter of some import. In this case it was definitely ‘once over lightly.’”

Coyne cited many recent cases, but first he took a well-aimed shot at the Conservatives, who have been accused by the Left of packing the judiciary with social conservatives. But seven of nine sitting Supreme Court justices are Stephen Harper’s appointees and one was selected by Tory Prime Minister Brian Mulroney. Quipped Coyne: “If the court more and more resembles a runaway train, it is Harper’s train, as it will be Harper’s wreck.”

Some wreckage.  In the Saskatchewan Labour case, also this year, the Supreme Court read into the Charter-guaranteed freedom of association an absolute right of unions to strike, “regardless,” added the anonymous legal practitioner, “of the public interest.” This followed on the heels of the Supreme Court’s 2007 B.C. Health Services judgment, where it recognized a Charter right to collective bargaining, overturning 20 years of its own decisions in the opposite direction.

Then there was the 2013 Saskatchewan Human Rights Commission ruling, in which the Court, “always wobbly on speech cases,” in Coyne’s words, now justified “restricting speech in the name of freeing it (a failure to ban hate speech, it mused, might be ‘more rather than less damaging to freedom of expression’).”

Coyne cites several more esoteric cases before returning to Carter. “What can one say about a ruling that finds a right to death in a section of the constitution devoted to the right to life — that does so in breezy defiance not only of Parliament’s stated preferences, but of the Court’s own ruling in a similar case, rendered two decades before?” And what justification did the Court offer for reversing itself? Just changes in “the matrix of legislative and social facts” since Rodriguez.

Another disturbing reversal came this year when the Court ruled Muslim women could take the citizenship oath with faces covered, only six years after it ruled Christian Hutterites had to show their faces on Alberta drivers’ licences.

It’s the Supreme Court’s willingness to overturn “their own precedents based on changes in public opinion” that concerns John Carpay, director of the Justice Centre for Constitutional Freedoms, a legal advocacy organization based in Calgary.

Such pursuit of public opinion, says Carpay, undermines one of the best qualities of a society ruled by law: certainty. “We should be able to rely on a Supreme Court ruling, even when we disagree with it, for longer than 20 years. Supreme Court rulings shouldn’t have to be issued with a ‘best-before’ date.”

However, Carpay said judges should not be criticized merely for throwing out laws.  They are doing their duty. “The Constitution expressly invites them to throw out laws that violate it.”

The problem with social “facts,” said Andre Schutten, legal counsel for the Association for Reformed Political Action, is that they are vague and subjective things. “In criminal cases you are deciding on the basis of hard forensic evidence and witness testimony,” he told LifeSiteNews. But social facts are actually often just assertions advanced by social scientists. Whatever the trial judge accepts as fact and whatever she rejects, the appeal judge is stuck with.

It all started with the Charter of Rights and Freedoms and the Constitution, said Carpay, replacing the British common law tradition with an “Americanized” system of checks and balances. Under the former, legal principles were established by an accretion of judges’ decisions each striving to follow previous ones; but all could be supplanted in an instant by an act of Parliament. “The sovereignty of Parliament prevailed,” said Carpay.

Under the American system, the Constitution is ostensibly supreme, and the courts are tasked with defending it against the legislators and government. Conservative critics there also claim that the courts have extended their role to making law.

In Canada, in the first years after the Constitution came into force in 1982, the Criminal Code was the main victim of Charter cases. The courts have become less willing to undercut the Criminal Code, but more activist on civil cases as those who went to law school during the “Charter Era” rose to the bench and the Supreme Court.

But it’s not the activism, it’s the content. “These are people with a secular humanist world view,” ARPA’s Schutten told LifeSiteNews. “It’s a religious faith like any other, with an understanding of how the universe came to be and humankind’s place in it.” But there is a dangerous difference, Schutten added. Christians and Jews and Sikhs know their faith colors their understanding of reality. Secular humanists believe they see the world neutrally and factually.

An example: the Supreme Court recently upheld the constitutionality of the Quebec government’s religious studies program, which Catholic parents claimed infringed on their religious freedom. The Supreme Court ruled that since Canada was a secular country it should take a neutral position on religion, which it said Quebec’s curriculum did.

“But it teaches all religions are man-made,” argues Schutten. “That’s not a neutral position. That’s a competing belief. And Sikh parents, any Christian parent, any Jewish parent, any Muslim parent would recognize immediately that this was a big infringement on their rights.”

Two more troubling features of recent Supreme Court rulings are its narrowing understanding of religious freedom and its rejection of the “hierarchy of rights” concept.  Freedom of religion is placed at the front of the Charter along with other “fundamental freedoms such as speech, assembly, conscience and expression, as the bases of all other human rights.”

But now, says the anonymous legal expert, “religious freedom just means freedom to worship and to believe.” And far from being fundamental, it often loses in competition with the rights of tiny sexual “minorities.”

In the Saskatchewan Human Rights Commission case, the Supreme Court ruled that anti-homosexuality crusader Bill Whatcott was guilty of inciting hate despite a defence based on his religious, speech, and conscience rights, and, astonishingly, regardless of whether his assertions about the health risks of homosexual intercourse were true. (Truth has long been held to be an “absolute defence” in defamation cases).

The Whatcott ruling signals another significant yet subtle shift. The Charter is designed to defend individuals and private organizations from government agencies. But since provincial human rights agencies rule over conflicting rights disputes—between individuals or between individuals and private organizations such as churches—the Supreme Court has found itself the final arbiter in conflicts such as Whatcott’s and Trinity Western University’s. These ultimately pit a religious worldview against a secular humanist view that holds individual autonomy as the highest value.

“Personal autonomy has become the prevailing value,” Schutten told LifeSiteNews. Thus the wishes of women pregnant with unwanted children trump their children, who cannot have wishes, and a depressed person’s wish for death trumps his value to his family or society or even his prospects for recovery. “As Christians we say humans derive their dignity from being created in the image of God,” said Schutten.

The problem for social conservatives is not that judges are making law, but the law that they are making. “There’s no going back on the written Constitution,” Carpay told LifeSiteNews, and no way to stop judges throwing out laws. “But conservatives have to be in the courts to fight for our rights. We can pick our fights and we can win some and lose some. But we can’t win any if we don’t fight.”