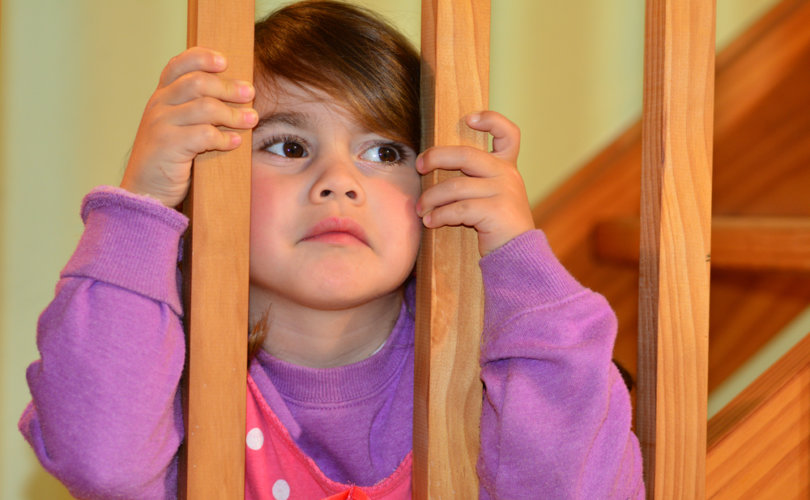 June 8, 2017 (Patheos) — Six months ago, I suggested that the Ontario government’s omnibus Bill 28 had defined the natural family unit out of legal existence. It was an unprecedented assault on human identity. Like Aldous Huxley’s dystopian society Brave New World, the words “mother” and “father” no longer had any legal standing in Ontario.

If a historic precedent were to be sought, the one that occurred to me as a Mohawk was the atrocious treatment of native Canadians in the residential schools. Some have described their treatment as “cultural genocide” and a “bludgeon to kill the Indian in the child.” The height of the atrocity wasn’t the physical and sexual abuse by authority figures, as awful as that was, but the official policy of “forcible enfranchisement.”

“Forcible enfranchisement” was the disgraceful euphemism used to justify violating native families. Children were simply taken from their parents. The government believed its violation justified because it was saving the children’s souls. “Enfranchisement” dehumanized the parents by likening them to slave owners.

I suggested that Bill 28 would have a similar effect.

To this day, I suspect that most Ontarians are oblivious to the fact that the spine of the body politic in the province, i.e. the families that constitute it, has been forcibly extracted in family law.

Who would suspect it? Politicians weren’t elected to enact theological experiments, or were their legislative intentions even considered by the unsuspecting electorate. The official line is that these changes are little tweaks, inclusive accommodations to bring legislation up to date.

Only radicals would ever consider using the tools of government to enact Frankenstein legislation on the basic social unit of the body politic. And, make no mistake, the Liberals have used their legislative power to do nothing less than to redefine human nature before the law.

They have had absolutely no scruple about ‘imposing their values’ on the unsuspecting populace.

Families too preoccupied with paying their bills and keeping their heads above water won’t notice the effect of the back surgery on the body politic and every family within it until they try to stand up in opposition, and find themselves impeded by a justice system that has disabled them.

What I warned about has now been swiftly enacted in Bill 89.

Bill 89 – the teeth set against the family, and Christians

Bill 89, the “Supporting Children, Youth and Families Act,” is yet another omnibus bill which, this time, has repealed and replaced the central tenets of the Child and Family Services Act, those that govern child protection, foster care, and adoption services.

Rejecting what every society throughout human history has acknowledged, i.e. the pre-political natural legitimacy of families, and the natural relationship of individual persons within the family unit, Bill 89 avoids the language of family and personhood, and substitutes identity group terms in its stead.

Henceforth, the agencies that care for families and the courts in Ontario are to operate according to a child’s “race, ancestry, place of origin, color, ethnic origin, citizenship, family diversity, disability, creed, sex, sexual orientation, gender identity and gender expression.”

Not just the novel and objectively unverifiable notions of gender identity and expression, but the entire laundry list of identity group characteristics is without legal precedent.

And the reason why isn’t because of systemic bigotry. It is because of the high value placed on the individual; whereas regarding identity groupings as determining factors of a person’s basic humanity repudiates the core convictions of Western civilization: that every single human being without exception is a person who bears the image of God, and ought to be nurtured by a natural family, either directly or through adoption.

The family is what God intended as a person’s birthright.

Lest people conclude that this is a partisan political complaint, it should be noted that the Bill repudiates liberal convictions as much as it does conservative ones. There can be no freedom for the individual in a country where the sanctity of the person has no legal status. And people are not creatures of the state, they are begotten of their parents.  It is part of their individual identity.

By changing this core assumption about human identity, this presumptuous legislation rejects the (Christian) assumption of a common humanity in favor of the sorts of tribalistic divisions which, as we are daily seeing, animate campus radicals to violate others basic freedoms.

Practically speaking, by rejecting the equality of individuals under a common law, the state has now enabled itself to intervene without legal impediment on behalf of these ‘marginalized’ groups. And it will doubtless justify its forcible enfranchisement of children by claiming it is ‘protecting’ them from the natural families and religious objectors who have been dehumanized by the loss of their privileged legal standing as parents.

In the past, as ARPA’s summary has noted, Child and Family Services were governed by the principles of “respecting a child’s need for continuity of care and stable family relationships, involving the child and his or her relatives and community members, and respecting cultural, religious, and regional differences. These principles supplement the central purpose of the Act, which is “to promote the best interests, protection, and well-being of children.”

Bill 89, however, redefines these principles to make them amenable to group rights, and to exclude the natural family. Furthermore, and most tellingly, unlike all the identity group characteristics that will be protected, the “religious faith, if any, in which the child is being raised” has been removed. If any doubt about how stark the change is, the religious identity of the child had been a vital consideration in the previous legislation.

Accordingly, Bill 89 also removes the requirement that a court determine, as soon as possible, the child’s religious identity in the course of a child protection hearing.

This pattern continues in determining who can foster or adopt children. Prospective parents who reject gender ideology on principle will no longer be deemed suitable. Since the adoption of children is a practice with particular theological significance to Christians, the application of the Bill could not be clearer. Needy children will be the greatest losers of the Bill.

Moreover, the natural children of parents who refuse to affirm their gender identity may also be considered “in need of protection.” Even a child “at risk of suffering” mental or emotional harm or whose parents do not provide “treatment or access to treatment” may receive the enfranchisement of the law.

For me, Bill 89 is a prescription for “religious genocide,” and a “bludgeon to kill the Christian in the child.” It is the equivalent of an official policy of “forcible enfranchisement” for our time. Its consequences for religious liberty are obvious, as are its threat to families at odds with the government’s theological position on human nature, i.e. Christians.

It must be repealed, for families, and for the sake of the children that ought to be protected within their confines, as God intended.

You can support a petition to repeal this Bill here.

Dr. Scott Masson is an Associate Professor at Tyndale University College in Toronto. He teaches and is committed to a recovery of a Classical Liberal arts education, and to establishing Classical Christian schools. He blogs and has recently begun a curated news site at veracrux.com.

Reprinted with permission from Patheos.