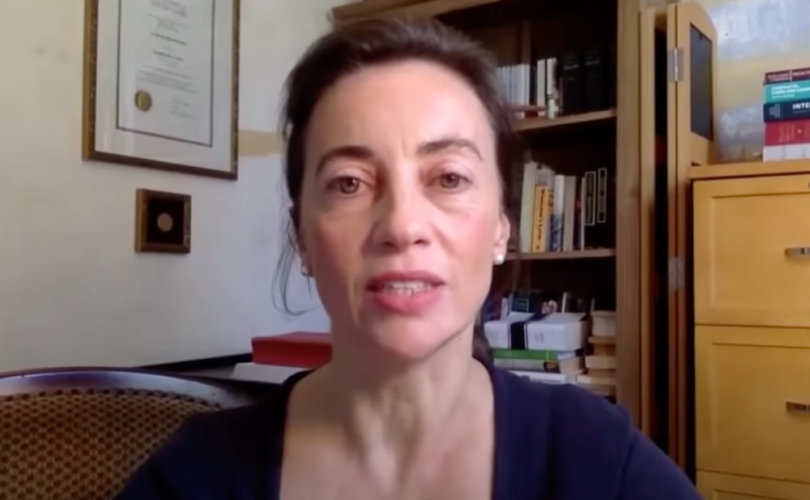 (The Epoch Times) – The reaction to ethics professor Julie Ponesse’s short videos explaining her refusal to accept the COVID-19 injections mandated by her employer, Western University’s Huron University College in Ontario, could have been predicted.

On one side, she has been lauded as a hero for standing up against what many now-sidelined individuals regard as an act of inhumane coercion. On the other (official) side, she has been sneered at as a fool, her various arguments deemed unworthy of respectful response.

Whatever else it has done, her public stand has highlighted the vast chasm between those who raise human rights objections to vaccine mandates and our government-supported and complicit intellectual elite.

In two videos, “Final Lesson on Refusing the Vaccine,” and “Can Vaccines Be Imposed On Us?” ­– the latter prepared in conjunction with a dissident doctors’ network called the Canadian COVID Care Alliance – Ponesse appealed to the fundamental right of each individual to make unforced decisions about medical treatments. In support of her position, she cited the Canadian Charter of Rights and Freedoms (pdf) on freedom of conscience.

She referred to the Universal Declaration on Bioethics and Human Rights, which declares inviolable the principle of “informed consent” regarding all medical policies. And she emphasized the Nuremberg Code’s definition of such consent as requiring a person to be “situated as to be able to exercise free power of choice, without the intervention of any element of force … or other … constraint or coercion.”

For Ponesse, being required by one’s employer to take an injection on pain of losing one’s livelihood cannot by any reasonable measure be considered “voluntary” or unconstrained. The framers of the Universal Declaration on Bioethics and Human Rights make clear that “human dignity, human rights and fundamental freedoms are to be fully respected” in all public health legislation and that “the interests and welfare of the individual should have priority over the sole interest of science or society.”

In framing her objection in terms of the conditions for human dignity, Ponesse put into words what many people have felt in their hearts.

In response, government-funded media and complicit academics have dismissed Ponesse without adequately addressing this profound objection. A Canadian broadcaster paired a headline casting doubt on Ponesse’s fear of dismissal with a pejorative subheading, “Critic says Julie Ponesse’s expertise in ethics doesn’t include vaccines or infectious diseases.” Ponesse herself never claimed expertise in vaccines. The critic making the charge also lacks virology expertise, so his authority to decry her vaccination concerns has no more basis than hers to raise them — far less, in fact, since she’s speaking for herself.

The circularity of the critic’s reasoning is demonstrated in the neat Twitter knot he tied for himself when he alleged, first, that “The strength of a position in ethics comes from the support provided via reasons and arguments, not that it’s uttered by an ethicist” (the inference being that Ponesse had offered no ethical reasons), and then attacked Ponesse for “falsehoods” (which he did not specify) and lack of medical “expertise.”

The rest of the article focused on a report from Huron that no one had been dismissed “at this time,” with the implication that Ponesse’s fear of firing was a self-serving exaggeration.

One newspaper attempted a more wide-ranging smearing of Ponesse, not only correcting her “questionable claims about the safety and effectiveness of COVID-19 vaccines” with government-approved data, but also linking her to the far-right fringe, mentioning that she has appeared on “right-wing” blogs and podcasts, including People’s Party of Canada leader Maxime Bernier’s YouTube channel, and pointing out that the Canadian COVID Care Alliance makes health care recommendations that are not approved by the medical establishment. But the government-funded newspaper offered no philosophical response to Ponesse’s argument that mandatory vaccination is wrong.

Another newspaper promised to profile professors “ripping” Ponesse (a curiously juvenile word) but delivered nothing more than a few unpleasant barbs, mostly relayed on Twitter. “Shame on Julie Ponesse,” went one of them. “This is the anti-thesis of the Socratic mission: to live the examined life.” Given that Ponesse asked questions based on time-tested and widely acknowledged ethical and medical principles, one is at a loss to understand the source of the professor’s scorn.

Another professor is quoted by the paper saying that Western’s policy “is legally enforceable and ethically justifiable.” No justification was quoted aside from an ad hominem attack on Ponesse for what he called her “Crocodile tears.”

The only professor profiled by the newspaper willing actually to discuss ethics seems to be Western University bio-ethicist Maxwell Smith. As a member of Ontario’s vaccine task force and leader of the province’s ethics framework for vaccine distribution, he was part of the official face of the vaccine mandate.

Smith does provide a Twitter thread explaining his ethical support for vaccine mandates based on the proven efficacy of the vaccines, their low risk, and the threat posed by the virus to the vulnerable, but his comments regarding compulsion in a mandate are strikingly crude. “Mandates do *constrain* choices,” he admits, “but not about whether to get vaccinated. Rather, they constrain choices about where you can work.” Here is hair-splitting with a vengeance!

Smith followed up this philosophical dodge by explaining that threat of immediate job loss does not make a choice less free, but his is an assertion that would convince no one actually facing the threat: “That vaccines may be required to work in certain settings doesn’t render the consent to be vaccinated involuntary. It’s still your voluntary choice whether to be vaccinated. Employers just don’t have to employ you if you aren’t.” Even squinting one’s eyes very hard, it’s impossible to see how forcing someone to choose between taking an injection and putting food on the table leaves that person with a free choice. For Smith, it seems, if they’re not actually forcing the needle into your arm, you’re fine.

Along with other members of the pro-vaccine lobby, Smith offers almost nothing in defense of vaccine mandates outside of government talking points about the lethal danger of the virus and the proven safety of the vaccines. Both points have been vigorously contested by dissident immunologists and virologists, who have placed their reputations and in many cases their careers in jeopardy to assert COVID’s very low infection fatality rate and to warn of the potential adverse effects of the vaccines, especially on young men, the attendant problem of waning immunity, and the vaccines’ inability to stop virus spread. The censorship, personal attacks, and firings they have faced are themselves powerful proof of the coercion and lack of transparency in authorities’ handling of this crisis.

But arguments about whether and how well the vaccines work are, to some extent, irrelevant. Ponesse has raised long-recognized and universally acknowledged ethical objections to coerced medical treatments. These cry out for serious debate, and one would expect that academics, who are supposed to stand apart from government, the medical establishment, and indeed society itself, would be eager to ask the hard questions and engage in non-dogmatic discussion of all points of view. It’s a measure of the hollowness of academia in Canada today that so little such discussion is either allowed or, it seems, desired.

Reprinted with permission of the author. Originally published by The Epoch Times