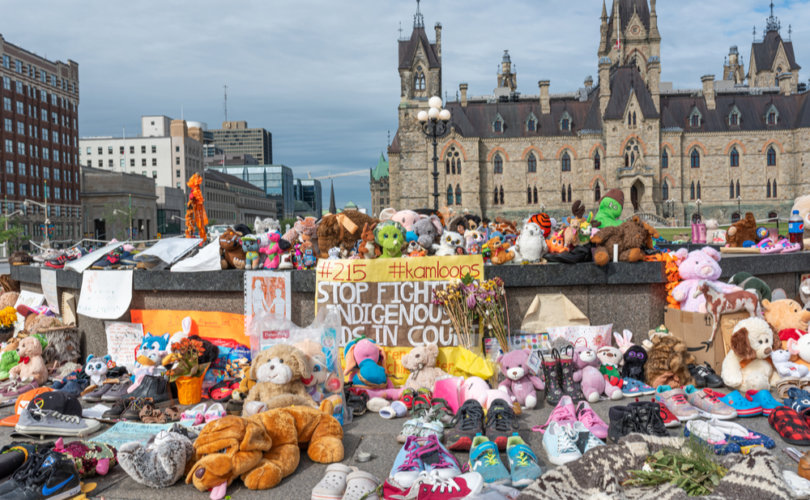 (LifeSiteNews) – The historical role of the Canadian government with Indigenous peoples reveals the truth of the residential schools amid ongoing accusations against the Catholic Church.

Although the residential school system was founded by the secular government in the 19th century – and then woefully underfunded by the state – and although different religious groups were asked to run the schools, the Catholic Church has borne the brunt of recent criticism.

During the early years of Canada’s history, the Catholic Church and the Canadian government took different approaches in regards to their interactions with the Aboriginal peoples.

The French Catholic missionaries attempted to interact positively with the Aboriginal people. The Jesuit missionaries spent years living among various tribes, learning their skills and culture while also teaching them.

According to the memoirs of the missionaries, titled Relationes, the Huron tribes were grateful to the friendship of the Jesuit missionaries, begging them to stay with them despite the dangers and hardships the Jesuits endured.

“Most of the Huron villages which had become scattered have conceived the desire to reunite in the Island of St. Joseph; and twelve of the most considerable Captains have come to entreat us, in the name of all this poor desolate People, that we should have pity on their misery,” relates the Jesuit account.

“They said that, without us, they saw themselves the prey of the enemy; that, with us, they esteemed themselves too strong not to defend themselves with courage; that we must have compassion on their widows, and on the poor Christian children; that those who remained Infidels were all resolved to embrace our Faith; and that we would make that Island an Island of Christians,” it continued.

On the other hand, the British government determined to make treaties with the Aboriginal peoples in an attempt to end the ongoing disputes in Canada. In an effort to segregate them, the British treaties allotted certain portions of Canadian land to the Indigenous tribes while keeping the remaining majority of land for themselves.

While the Catholic missionaries attempted to build a new culture of European and Indigenous people living side by side, learning from each other, the British treaties forced the Aboriginal tribes to separate from the rest of Canadians.

In the 17th century, Catholic nuns established the first schools for Aboriginal children in Upper Canada. The nuns received no compensation but freely and lovingly taught, washed, dressed, and fed the young Aboriginal students.

The schools were intended to educate and teach new skills to the Aboriginal children in order to develop a shared culture in the new country of Canada.

Female students at these schools expressed gratitude in letters recorded by the Jesuit Recollections. One student wrote, “[m]y good Mother, I am about to leave. I thank you for having taken such care of me, and for having taught me to serve God well. Do I thank you for a trifling matter? I shall never forget it.”

In 1883, the Canadian Government under the newly established Indian Affairs Department took control of the Aboriginal schools, establishing larger institutions, known as the “residential school system.” These schools were reportedly created to offer academic and industrial training to Aboriginal children to help them better integrate into Canadian society.

According to a 1920 amendment to the Indian Act, the Department of Indian Affairs could send any school-age Indigenous child to a day or residential school, which resulted in children being forcibly removed from their families.

Catholic author Michael O’Brien who attended residential schools and gave testimony to the Truth and Reconciliation Commission, previously told LifeSiteNews that the chief underlying issue in the residential school saga was the institutional abuse of children by removing them from their families by the state authorities, and then taken to the schools, noting the “long-term psychological and social effects of this.”

It was the RCMP acting under the Canadian government, not the Catholic Church, which forcibly removed Indigenous children from their parents’ homes to attend the schools. The RCMP also served as truant officers, hunting down children who ran away from the schools and returning them to the government run institutions.

— Article continues below Petition —
PETITION: Trudeau must apologize for "mass grave" smear that led to church-burnings
Show Petition Text
4774 have signed the petition.
Let's get to 5000!
Thank you for signing this petition!
Add your signature:
Show Petition Text

Furthermore, residential schools, while run by members of Catholic religious orders, were funded by the Canadian government. Records show the schools were severely underfunded, meaning that children did not receive sufficient medical care.

In 1907, the Canadian government then ignored a warning from the current Canadian Medical Inspector Dr. Peter Bryce of ‘prime conditions’ for ‘outbreak of epidemics’ at residential schools.

The schools were described as being in a “defective sanitary condition” that included irregular exercise, insufficient ventilation – which was often closed during the winter for budget savings – and the admittance of students “already infected with contagious diseases.” Bryce did not hold back from his condemnation of the government funded schools. It was “almost as if the prime conditions of the outbreak of epidemics had been deliberately created,” he wrote.

The children in these under-funded schools often suffered from excessively high rates of tuberculosis. From 1910 through 1920, child mortality rates at the schools were consistently high, in a period in which mortality rates throughout Canada for children under five were 296.75 deaths per 1,000 births, according to 1900 statistics.

Additionally, the Department of Indian Affairs often refused to ship home the bodies of children who died at the government-mandated schools, meaning they were frequently buried on site, resulting in the so-called ‘mass graves’.

For nearly two hundred years prior to the Canadian government’s interference, the Canadian Catholic Church cared for and educated the Aboriginal children.

However, under the government’s control, the schools were home to various abuses of the Aboriginal children and their families. Unfortunately, instead of accepting responsibility and apologizing for its predecessors, the Canadian government continues to shift the blame to the Catholic Church.