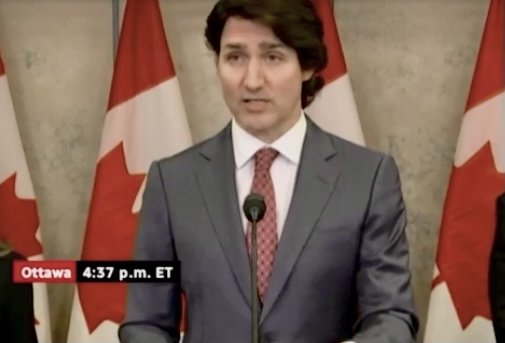 EDITOR’S NOTE: The first and last videos in this report contain crucial information that many readers may not yet be aware of. It is strongly encouraged that they be viewed and that this article be forwarded to others. This article was originally published Feb. 24.

STORY AT A GLANCE

Starting at 32:20 in the video below, World Economic Forum creator Klaus Schwab, during the 2016 WEF annual meeting, introduces with great praise and admiration speaker and WEF young leaders’ program graduate, Justin Trudeau. After that is a brief, commentary on the comprehensive Digital ID system Ontario Premier Doug Ford, another WEF attendee, is currently arranging for all Ontario citizens. The narrator explains that this program actually comes right out of the Great Reset manual.

(Mercola) — Well, well, well. Canadian Prime Minister Justin Trudeau just let the deep state cat out of the bag for all the world to see. The premature disclosure and honest preview of what’s in store for the people of the world is perhaps the silver lining in all of this.

By invoking the Canadian Emergencies Act1 of 1988 to allow for the blanket revocation of protesters’ driver’s licenses and seizure of their bank accounts — and anyone who made even a nominal donation to their cause — Trudeau is showing the world what Klaus Schwab’s Great Reset is really all about for the average person.

If we go along with their financial reset to a centralized global digital currency, the central bankers can and will financially cripple anyone, anywhere, anytime, for any reason. That’s more than sufficient leverage to keep most people in line.

The World Economic Forum didn’t declare that by 2030 “you will own nothing and have no privacy”2 for nothing. They mean it. You won’t even own your own body, if they get their way. Their aim is complete control over every minutia of your life. Only they will be free to live and rule as they please.

As reported by The Defender:3

“In a move that gives him ‘sweeping powers,’ Canadian Prime Minister Justin Trudeau invoked — for the first time in history — Canada’s Emergencies Act in response to what political commentator Krystal Ball characterized as a ‘pretty much completely peaceful’ protest.

Those powers include giving Canadian banks the ability, without a court order, to ‘immediately freeze or suspend accounts’ of any Canadians’ who have donated $25 or more to the trucker convoy fundraising accounts.

In an episode of ‘Breaking Points With Krystal and Sagaar,’ Ball’s co-host, Saagar Enjeti, said the Canadian government also will be ‘seizing any funds that go towards the protests, including cryptocurrency.’

With the powers granted to the government by the Emergencies Act ‘they can not only seize and suspend your driver’s license forever, they can also go and take money out of the owner of the truck’s bank account,’ Enjeti said.

‘So, we are looking at full-fledged financial warfare on the truckers … You have here the Canadian Prime Minister, who is our neighbor to the north, invoking the Emergencies Act, declaring all out financial warfare on his own citizens and suspending civil liberties … in a supposedly free and open society,’ Enjeti said. If this is happening in your country, ‘you [clearly] don’t live in a free country,’ he argued.”

In addition to giving the Canadian government the authority to seize bank accounts of citizens without court order, the Emergencies Act also gives Trudeau the power to:4,5

To understand just how ridiculous the invocation of this Act is under current circumstances, consider that it was designed for use only in times of extreme crises,6,7 such as a wartime emergency where there’s an express threat to the security and sovereignty of the nation. The situation must be “urgent and critical” and “seriously endanger the lives, health or safety of Canadians.”

Moreover, the Act may only be invoked if the emergency cannot be addressed by any other federal law in existence, and/or if it exceeds provinces’ ability to effectively address the situation.

Opposing the prime minister’s unprecedented power grab are the premiers of Alberta, Manitoba, Saskatchewan and Quebec. Alberta Premier Jason Kenney pointed out that the nation already has “all the legal tools and operational resources required to maintain order,” and that “no relevant additional powers of resources” can be granted by the Act.8

Kenney also stated the obvious when he told the prime minister to “end the cross border trucker vaccine mandate, as it serves no useful public health purpose.” That would be the peaceful solution to the blockade.

The Canadian Justice Centre for Constitutional Freedoms has also denounced Trudeau’s invocation of the Emergencies Act, calling “the use of emergency powers unjustified by Ottawa facts and reality.” Despite that, the Canadian Parliament voted to approve Trudeau’s motion to invoke the Act, with 185 votes for and 151 against, Monday February 21, 2022.9

According to Trudeau, the trucker protest is impeding commerce and preventing people from going to work and making a living. With that, he’s basically condemning his own actions, as Trudeau himself has shut down businesses and prevented people from making a living, on and off, for the last two years. The hypocrisy is grotesque beyond words. Yet he’s gone even further than that.

‘Trudeau has gone too far’

In a February 15, 2022, editorial, the Toronto Sun denounced the prime minister’s hateful rhetoric against Canadian citizens and accused him of fanning flames of hate of his own making:10

“Prime Minister Justin Trudeau’s unjustified invoking of the Emergencies Act is deeply problematic and will have long-lasting consequences for the country. Ever since the freedom convoy first touched base in Ottawa a couple of weeks ago, the PM has gone out of his way to increase the tensions.

The Liberal government appeared to be hoping for some sort of Jan. 6 style event as happened in the United States last year. All of their rhetoric indicated they were keen to see such an event go down. It never did. The convoy has been peaceful throughout …

Trudeau has called protesters every name in the book even though they are a diverse crowd in every sense of the word. Now he is giving himself extraordinary powers to deal with these protests. One of the most disturbing parts is how they can now dictate that banks freeze people’s accounts without a court order …

Trudeau … wants division and more hostility … The protests may be a nuisance and many people may disagree with them, but that doesn’t justify this decision. The only thing that can be said in defense of Trudeau’s invoking of the Emergencies Act is that it was his incompetence that made such an extreme measure necessary.”

Indeed, Trudeau’s rhetoric has been anything but unifying. First, he called the Freedom Convoy a “small minority fringe” that are expressing “unacceptable views.” He must’ve changed his mind, albeit privately, seeing how a sane leader is unlikely to invoke radical emergency powers for a small group honking horns.

Then, he insisted that the protesters were a bunch of “racists” and “misogynists” waving Nazi flags and stealing food from the homeless. Several have now publicly demanded he retract such statements and issue apologies.

Among them is conservative parliament member Candice Bergen, who demanded Trudeau apologize for his “hateful rhetoric” against “peace loving, patriotic Canadians.”11 In an impassioned speech, Bergen also reminded House members that Trudeau himself “wore blackface more times than he can remember.”

Another is Melissa Lantsman, a Jewish conservative MP, whom Trudeau accused of “standing with people who wave swastikas.” Lantsman called Trudeau’s words “dangerous and disgraceful.” According to the Toronto Sun:12

“The controversy stems from an ugly exchange in the House of Commons Wednesday in which Lantsman accused Trudeau of fanning ‘the flames of an unjustified national emergency’ by calling Freedom Convoy truckers ‘racist’ and ‘fringe.’

Suggesting a Jewish MP would stand with a Nazi flag was so repugnant that Speaker Anthony Rota scolded members, and ‘that includes the Right Honourable Prime Minister,’ for using ‘inflammatory words in the House.’

Calling it ‘terrible,’ Trudeau’s half-brother Kyle Kemper said ‘he’s acting like a bully.’ ‘A new low, even for Trudeau,’ tweeted Conservative MP Pierre Poilievre. ‘He falsely accused a Jewish MP and descendant of Holocaust survivors of standing with people who wave swastikas. She did not.’”

Michael Mostyn, CEO of B’nai Brith Canada, a Jewish service organization, also condemned Trudeau’s comment to Lantsman, saying “This misperception should not be permitted to stand. We would hope the prime minister promptly addresses this matter.” So far, Trudeau has done nothing of the sort.

In a video (above), free speech advocate and trucker convoy organizer Tamara Lich predicted her arrest and made a tearful plea to protesters to remain peaceful. The next day, Lich was picked up and put in handcuffs by Ottawa police.

Legal experts are now warning that Trudeau’s invocation of the Emergencies Act could have consequences for generations to come. According to Marco Mendicino, “public reports” indicate that people with “extremist ideological positions” may be participating in the blockade, hence the government’s need for emergency powers.

However, as noted by law professor and executive director of Rights Probe, Bruce Pardy, that’s hearsay at best, and acting on rhetoric alone sets a dangerous precedent.13

“Just for a moment, consider the implications. This is a government that has invoked an emergency statute on its own admission on the basis of something that somebody has said,” Pardy said.14 “They have no actual violence occurring. They have no intelligence about threats of violence occurring. I’m sure you can work out what the consequences are if this is to be considered a proper use of the Emergencies Act …

Freedom now means, apparently, safety. The rule of law means governments taking control of things for ‘proper outcomes.’ Violence can now mean words. Honking has been called violence, and they now are taking that literally.

If this invocation of the Emergencies Act is valid, then governments have the power to declare emergencies and crush any peaceful protest, any dissent, that threatens their political fortunes and ideology, and that’s not the kind of country we want to live in …”

Cecil Lyon, a dispute resolution legal expert from Ontario, also vehemently opposed Trudeau’s actions, calling it a “sledgehammer approach” that shows the government is “losing its way and not looking at how you should resolve a dispute.”15

Thankfully Trudeau lifted the Emergency Powers Act on Wednesday two days ago. Clearly, Trudeau is wedded to vaccine mandates, and willing to do just about anything to keep them in place. One wonders whether the Trudeau Foundation’s ownership stake in Acuitas Therapeutics — rumored to be around 40%, per Dr. Robert Malone16 — might be influencing his behavior?

Acuitas makes the lipid nanoparticle delivery system that Pfizer/BioNTech uses in its COVID shot.17 In a February 12, 2022, video (above), David Martin, Ph.D., discussed Trudeau’s conflicts of interest at depth, saying:18

“Trudeau is controlling the illegal monopoly on BioNTech’s and Moderna’s form of injection. You heard me right. The thing that’s being injected into people across the country and around the world is in fact an economic boon … that pays right into the pockets of Trudeau.

He’s not interested in public health. He’s interested in lining his pockets, because regardless of the shot you take, Canada gets the coin …

Trudeau is running a monopoly. This is Chicago in the 1920s, this is the mob, and we need every American, every Canadian and everyone around the world to join together and inform themselves on the crimes that Justin Trudeau is pushing under the guise of public health.”