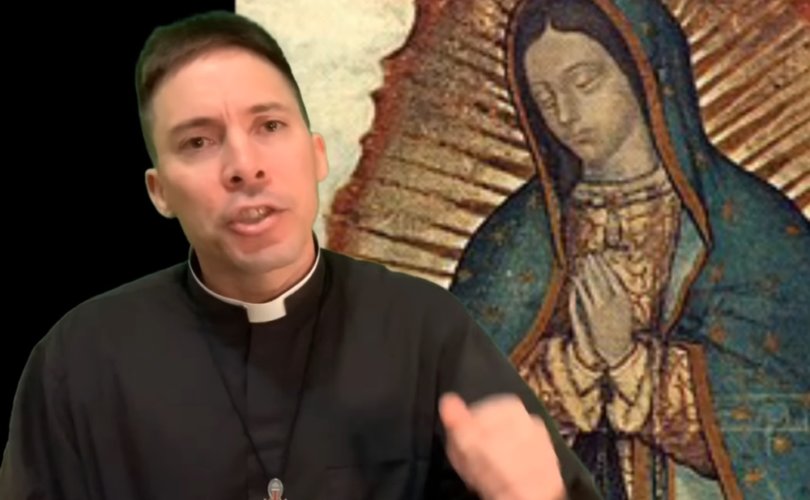 (Campaign Life Coalition) – In a powerful homily on the day the Church commemorates the Holy Innocents slaughtered by the evil King Herod, a Catholic priest urged his congregation to begin demanding from pharmaceutical companies products that are in no way tainted by abortion.

Father Mark Goring told his congregation at St. Mary’s Parish in Ottawa on Dec. 28 that if enough Christians said, “I ain’t touching anything if it’s abortion-tainted,” pharmaceutical companies would have to listen and change how they make their products.

“If you can’t figure out how to make something that’s not abortion-tainted, too bad: Figure it out,” the priest said in his comments directed towards pharmaceutical companies.

“We’re good at figuring things out if we have to, aren’t we? We can figure things out. Well, listen, figure out how to make pharmaceutical products without taking the life of an unborn child. Figure it out.”

“And I want to see on pharmaceutical products a little symbol that says nobody – no child – was killed to make this product.”

The homily drew enthusiastic applause from the congregation.

Fr. Goring began his homily by pointing out that in the food industry, if someone is a vegetarian or gluten intolerant, they can purchase food that has a clear symbol indicating that the products are meat- or gluten-free.

“And the reason I bring this up is in the last little while, it has become obvious to us that the pharmaceutical companies are producing products that are abortion-tainted. And as Christians, this should, of course, disturb us. And the idea of, you know, using an unborn child to make a product – no one likes that idea,” he said.

“And, the reason I bring up the little image of the food products – I don’t know about you, but I want to see a little symbol on pharmaceutical products — I don’t care what it is: toothpaste or, you know, Tylenol, or whatever it is — I want to see a little symbol one day that indicates, ‘Hey, the medication I’m taking or the product I’m taking is not abortion-tainted,’” he said.

“Because I don’t want to have anything to do with the taking of the innocent life of a child,” the priest added.

Goring said that a new slaughter of the innocents is taking place today — and has been for the past number of decades — that targets pre-born children for the harvesting and selling of their body parts for research and for the creation and development of various products.

“It’s worse than you imagine. I’ll spare you the details. But this is gruesome. It’s horrific. It’s an abomination. It should be illegal. It should be outlawed.”

— Article continues below Petition —
PETITION: Appeal to Catholic Leaders to reject abortion-tainted COVID vaccines and mandates!
Show Petition Text
12120 have signed the petition.
Let's get to 12500!
Thank you for signing this petition!
Add your signature:
Show Petition Text

Goring said that Christians have a duty to ask themselves if they are complicit in this new slaughter of the innocents and if so, to take steps to do something about it.

“And so again, as we reflect on the awful atrocity that Herod had carried out, you know, from a distance, we need to ask ourselves today, you know, are we responsible to see to it that similar things aren’t happening in our day? And again, for us, as Christians, for us, as Catholics, it’s our duty.”

“This is something that again, as Catholics over the next years and decades, we need to insist: ‘I want my whatever products, pharmaceutical products, I want them to be abortion-free. I don’t want to have anything to do with the taking of the lives of the most innocent children,’” he said.

In a follow-up video on January 1, Rev. Goring emphasized that those who currently take medications that are tainted by abortion should respond by putting pressure on pharmaceutical companies to create products that are abortion-free.

“Listen, you keep taking your medications. You’re not doing anything wrong,” he said, “but you do need to be aware and, I think, begin to put pressure on the pharmaceutical companies and say, ‘Hey, I want products that are not abortion-tainted. I believe that now is the time for us to begin to speak about this more forcefully, to become more insistent.”

“We know that so many of the products we consume are unethically produced. We can’t stop taking every product that is compromised. However, we must be aware of the compromises and do something about them,” Goring added.


Rev. Goring pointed out in his follow-up video that the movement against animal cruelty was quite successful in petitioning numerous companies to create products not tested on animals.

“Many pharmaceutical companies are very happy to highlight that there was no animal testing involved with the production of their products. And, this is the simple point I’m trying to make: We should have the same respect for the life of unborn children if consumers demand to know whether or not a product is abortion-tainted. We shouldn’t be laughed out of the pharmacy. This is a perfectly legitimate thing to be concerned about,” he said.

What I appreciated most about Rev. Goring’s homily was his clear call for Christians to not simply accept the horrifying situation we find ourselves in of companies using murdered pre-born children to create and develop products, but to rise up and demand change.

Each cell line used came from a little boy or girl created in the image of God who had their own DNA, their own fingerprints, their own beautiful smile. Each one of these children was called into being by God to be loved and to love.

Deliberately cutting their lives short for the sake of experimentation is the gravest of injustices against our fellow human beings. It reveals how sick our society has become that so many tolerate the deliberate killing of the weakest and most vulnerable among us for the sake of health care and beauty products.

A society will be judged by how it treats its most vulnerable. Fr. Goring is right: It’s time for all of us to take a stand for these children and demand an end to the creation and development of products that are in any way connected to their demise via abortion and the harvesting of their body parts.

And, as Fr. Goring said, “Using an unborn child to make a product – no one likes that.”