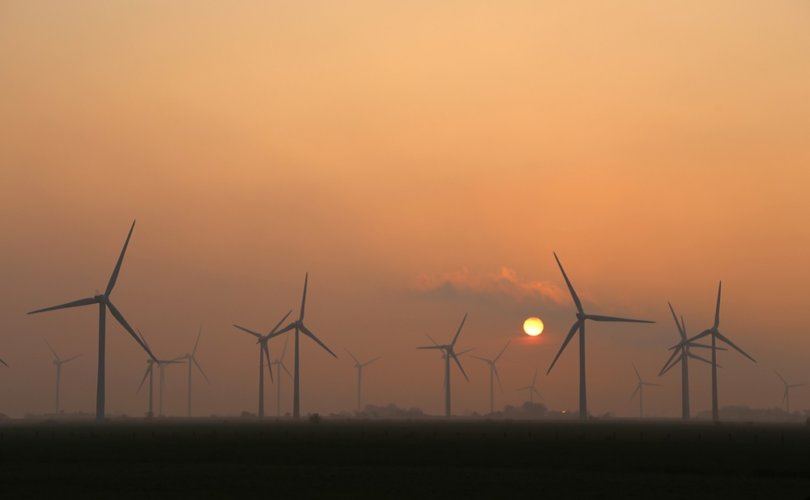 February 5, 2021 (American Thinker) — Net Zero, Climate Action, Build Back Better, and the Great Reset are some of the names for policies aimed at expediting the transition of the global energy sector from fossil fuel to renewable technology. The goal? Saving the planet from climate apocalypse.

But there is a huge hurdle to make this transition a reality. Most of the world’s primary energy comes from coal, oil, and gas.

Fossil fuels dominate the global energy sector, and there is a reason for that: they are reliable, abundant, and affordable. Further, with constant innovations, the amounts of pollutants emitted from burning them have been reduced considerably.

Japan’s clean-coal technology and improved combustion engines in automobiles are two of the many technologies that have reduced pollutants in emissions, making fossil fuels all the more desirable.

Wind and solar will usher in chaos

In contrast, wind and solar make up an insignificant percentage of the world’s energy consumption.

The renewable contribution to global energy consumption in 2017 was less than 2%. Solar and wind contributed just 7% of the world’s electricity in 2018.

There is a reason for that. Besides being expensive, they are highly intermittent and so are unreliable. Further, wind and solar power cannot be used without backup by fossil fuel-powered energy sources.

— Article continues below Petition —
Boycott American Girl: Tell Mattel to STOP pushing a lesbian storyline on children!
Show Petition Text
2320 have signed the petition.
Let's get to 2500!
Thank you for signing this petition!
Add your signature:
Show Petition Text

Even in Germany, increased reliance on wind and solar has resulted in energy chaos. Berlin is facing energy shortages as both wind and solar have failed during the ongoing winter, and coal plants are running at full capacity to meet the demand.

“With this supply of wind and photovoltaic energy, it’s between 0 and 2 or 3 percent — that is de facto zero. You can see it in many diagrams that we have days, weeks, in the year where we have neither wind nor PV. Especially this time (winter) for example — there is no wind and PV, and there are often times when the wind is very miniscule.  These are things, I must say, that have been physically established and known for centuries, and we’ve simply totally neglected this during the green energies discussion,” said Dr. Harald Schwarz, professor of power distribution at the University of Cottbus.

It will be impossible to replace fossil fuels with solar and wind. Neither the developed West nor the developing countries in Africa, Asia, and South America can afford to make a move that will jeopardize their economic growth and the well-being of their citizens.

In developing countries, the risk of renewable dependency is much higher. Their GDP growth is highly sensitive to disruptions in the energy sector. Predominantly industrial in nature, the economies in developing countries are completely reliant on the supply of reliable and affordable energy. Apart from electricity, the supply of oil and gas is also critical for the transportation and manufacturing sector.

Resistance to carbon imperialism and hypocrisy

However, the present onslaught of anti-fossil fuel policies — from the European Union, United Nations, and now from the Biden administration in America — will likely force countries to increase their dependency on unreliable renewable technologies. In turn, the countries will risk the growth of their commercial sectors, their industries, and the well-being of their households.

Defenders of developing countries’ rights to use fossil fuels have called this type of climate diplomacy and fossil fuel arm-twisting “carbon imperialism.” They are right to do so.

The economic success of Western civilization — and its unprecedented social development — can be credited to the Industrial Revolution and how fossil fuels enabled it. Today, the very benefactors of that fossil fuel-empowered economic progress are asking developing and poor countries to forgo the use of fossil fuels. This is nothing short of a form of economic suppression and is indeed carbon imperialism.

As far as the current energy outlook is concerned, some of the biggest fossil-fuel consumers, like India and China, are determined to resist this form of carbon imperialism. But not all developing nations will be able to show this resolute display of political willpower to continue using fossil fuels.

Much smaller nations and poor countries are entirely dependent on foreign aid to keep their economies running. Such nations have no choice but to surrender to the carbon imperialism imposed upon them.

For example, the African Developmental Bank (ADB) announced in 2019 that it will not fund any coal projects. Just imagine the impact of that on the future progress of countries in the continent!

According to its own admission, the ADB’s “primary mission is to reduce poverty, improve living conditions for Africans and mobilize resources for the continent’s economic and social development.”

Yet, it is now depriving its own members of an energy source that has had a proven record of uplifting communities and nations out of poverty during the past two centuries!

Likewise, a couple of other major funders have announced that they will not fund fossil-fuel projects. Instead, they will restrain funding nations that are not adhering to their decarbonization policies. The European Investment Bank, which has funded 13.4 billion Euro’s worth of fossil fuel projects since 2013, announced that it will drop fossil-fuel funding.

The collective anti-fossil fuel push from the UN, EU, funding institutions, and the Biden administration will push the smaller nations towards the brink of economic chaos and a stall their progress.

In fast-developing nations like India and China, there will be considerable delay in poverty alleviation if they succumb to the carbon pressure. Even developed nations will encounter instances of energy poverty if they allow their domestic energy grids to depend more on renewable tech.

Carbon imperialism is evil, and the biggest benefactors of fossil fuels perpetrate it. The world should not remain silent.

“He who passively accepts evil is as much involved in it as he who helps to perpetrate it. He who accepts evil without protesting against it is really cooperating with it.” — Martin Luther King Jr.

Vijay Jayaraj (M.Sc., Environmental Science, University of East Anglia, England), is a Research Contributor for the Cornwall Alliance for the Stewardship of Creation and resides in New Delhi, India.