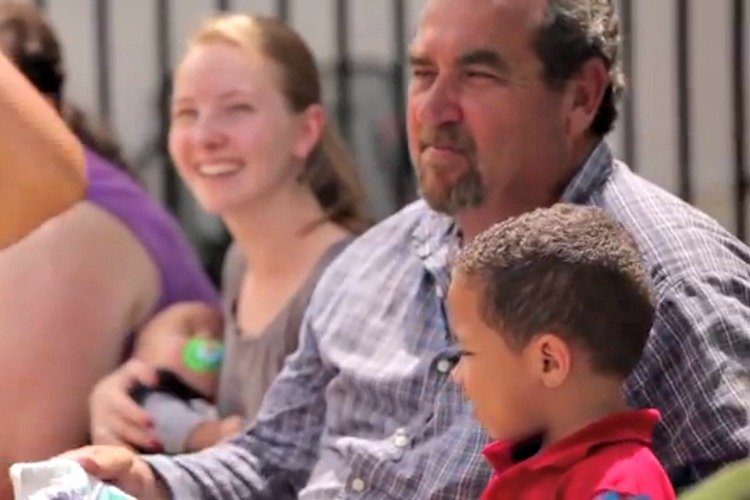 February 15, 2016 (UnmaskingChoice) — After a long week doing campus outreach, Friday morning bright and early our team headed to one of Orlando’s most notorious abortion clinics, the Women’s Center. Our friend John Barros was waiting for us. He’s been walking the sidewalk in front of the clinic for six years, six days a week. Every month, around thirty women and girls respond to his pleading and change their mind. Thirty babies in the womb veer away from death at the very last moment.

The clinic is actually just a red brick house, with white columns lining the front. A flag bearing the name “Women’s Center” jerks about in the wind atop an oddly-placed flagpole on the front lawn. The sidewalk is only about a dozen feet from the front door, so John and the people who sporadically join him can call out to the dads and moms heading in to drop off their children up until the very last moment. Driveways sloping down to a parking lot flank the house. One driveway, close to the walkway leading to the front door, is the place John calls “the Valley of Decision.” Many girls stop there to talk. Many never continue on into the clinic.

On the back of the clinic, a pink and white sign announces that “You have a choice…Our Women’s Center will provide the care you deserve.” An inadvertent insult to say the least. John calls out to those heading into the clinic, offering real care. His church, St. Andrew’s Chapel, stands behind John completely. The pastor, R.C. Sproul, considers his ministry essential. They are committed to providing whatever care John offers the women heading into the abortion clinic.

The sight of scared girls, some crying, rushing up the walkway into the clinic is hard on the volunteers. They’re seeing where women and girls can end up if we don’t reach them on the campuses, at the schools, on the streets.

Standing in front of an abortion clinic brings with it a helplessness and a desperation. You often have only seconds to call out to those walking into the clinic. Early on in the morning, a woman named Brooke hears John calling out and stumbles out of the clinic and across the road into a parking lot. My colleague Devorah goes to talk to her. John joins them. She has three kids already, she says, and she just doesn’t feel as if she can do it. She leaves with one of the volunteers a little while later, but this time on the way to a crisis pregnancy centre for life-affirming care. John laughs. “Praise God!”

A few of my friends begin talking to a young girl in the Valley of Decision, and I call out to a guy who leaves the clinic to light a cigarette. He’s wearing aviator glasses and taking shaky drags. I ask him if there’s anything at all we can do to help, anything to convince him to change his mind.

“I tried to talk her out of it. She’s having none of it, man,” he says in an angry yet wobbly voice. “It’s her choice at the end of the day. If I didn’t take her, she’d come by herself. I wouldn’t even pay for it. She wouldn’t listen to me.” Inhale. Exhale. Cloud of smoke. “I give you guys props for coming out here though.”

I ask him to come over and talk to me. “Nah, I’m a convicted violent offender. Trying to chill.” I tell him I don’t care. He waves his hand, flicks his shriveled cigarette, and slams the front door behind him. A white box-bodied truck pulls up, with “Pro-Med Waste Solutions” emblazoned on the side in blood-red letters. John says it’s here to take the dead babies away, the ones whose parents left without them. The driver heads inside, and comes out carrying a box. A cardboard coffin.

A vulture keeps circling overhead. I’ve seen them all week, like they’re following us or something. As if we need another reminder of what could happen if we aren’t convincing enough. I don’t like vultures.

The girl in the Valley of Decision decides. She’s not going to go through with the abortion. She leaves with a volunteer for the crisis pregnancy centre, too. She’s going to get an ultrasound and meet her baby.

A reporter wearing a sharp suit shows up with a cameraman. They head to the front door and push their way inside. They’re from Channel 9 News, an ABC affiliate, and they want an interview. The owner of the clinic has apparently been busted on drug charges in South Carolina, caught with a car full of narcotics and bloody abortion tools with bits of babies still stuck to them. He could lose everything, and the clinic could shut down. The reporters want a comment. The security guard send them packing back down the walkway.

They decide to interview John instead. He says he hopes that James Pendergraft finally gets shut down, and that the killing finally stops. The reporter thanks John and asks everyone to keep the story on the down low for now. The story airs at five, and they don’t think anyone else has gotten to it yet. John is beaming. He laughs and agrees.

I ask John what he’ll do if the clinic finally shuts down. “Find another one,” he chuckles. He pauses for a moment. “Maybe take a vacation first. I haven’t had a vacation in six years.”

And for the hundredth time since meeting John, I feel inspired. He robs Death with a smile on his face. He beards the lion in his own den. He reroutes traffic at the edge of a cliff. And hundreds of children are alive because he calls out on their behalf. “It’s awesome,” he says.