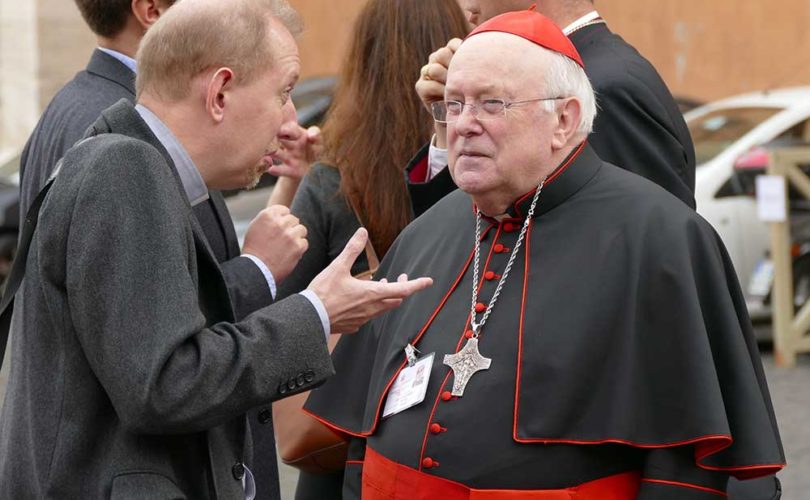 BRUSSELS, November 13, 2015 (LifeSiteNews) — Cardinal Godfried Danneels gave an interview about the present situation of the Church to Vatican Insider, of the Italian La Stampa. While the Pope’s special guest to the Synod on the Family does not directly address the hot-button issues such as giving the divorced and remarried access to Holy Communion or more welcoming attitudes towards homosexual couples, his points of view do give insight into his personal agenda. The former archbishop of Brussels sees no need for a “robust” Church: on the contrary, he hopes for more “humble” attitudes, steering “clear of all forms of triumphalism and claims to self-sufficiency.”

This is the sort of language that was rife in the years following Vatican II, when many in the Church were talking about opening up to the culture and surrendering its public power. This was the time when seminaries and convents were emptying out and vocations seemed a thing of the past. It was particularly so in Belgium. Cardinal Danneels himself, who was ordained bishop of Antwerp in 1977 before becoming the primate of Belgium two years later, accompanied this decline from which the former Catholic country has not recovered since. Churches are empty; regular religious practice has fallen to less than 5 percent of the population.

This is the Cardinal who after he left his see in Mechelen-Brussels for retirement in 2010, was under suspicion that he had covered up a case of sex abuse by a Belgian bishop, Roger Vangheluwe, in the late 1970s. He was taped while encouraging a victim, one of the bishop’s nephews, to remain silent about the affair. Danneels has also recently admitted that he was part of the Sankt-Gallen cardinals and bishops’ group, the “Mafia” as he called it, that met regularly in Switzerland in order to work against the election of Cardinal Ratzinger to the see of Rome.

Since his election in 2012, Pope Francis has met Danneels regularly and called him out of his retirement to join the recent Synod.

Things being thus, any statements made by Cardinal Danneels are noteworthy: not only does he have the ear of the pope but he also shares Francis’ choices and concerns.

Asked whether the salvation of Catholicism can only come from “healthy” African Churches that are “doctrinally robust,” Cardinal Danneels answered:

“Some African bishops tell us: you are pagans. You wiped everything out. But I remember Belgium being full of vocations, there were huge seminaries and novitiates being built up until the 60s. Christian families did everything they could to give their children a sense of belonging in the Church. But we started seeing the faith dwindling in boys and girls aged 17-20. This wounded them, it caused great suffering. Is it right to say it was their fault and that the parents were not good Christians? No, that’s not the case. The act of becoming Christians and persevering in the faith remains a mystery and is not the result of some educational or sociological mechanism. It seems to me that all the talk about ‘robust’ Churches that should save the rest of Catholicism, is for the purpose of ecclesiastical politics. The abstractness of it is striking.”

Abstractness? Empty churches in Belgium are only too real. In a way, Danneels appears to be justifying himself and a whole trend that led to what should be called a national apostasy.

But Danneels has an explanation:

“European Churches have been overrun by the effects of secularization that have also led to rising individualism. But this very individualism could reach Africa sooner or later: that phenomenon that sees people thinking of themselves as individuals rather than as members of a group, a community, or a mass. It is possible that the crisis we have had will spread there too, with all that this entails. Africans may also experience a situation similar to ours. Then they might call us up to see how we dealt with it. To get some useful tips.”

Now this is patronizing of the worst kind: looking down on flourishing Christianity and pretending to have all the answers. How much are “useful tips” worth from the literally paganized countries of Western Europe to bishops whose flocks still have love and respect for Jesus Christ, His Church and His commandments?

In the 1930s, one third of all missionaries in the Catholic Church originated from the relatively small region of Flanders and the Catholic southern regions of the Netherlands. Throughout the first half of the 20th century, there were hundreds and thousands of vocations. It is true that the sudden collapse that followed the Second Vatican Council was in a way a mysterious event.

On the other hand, the modernization of the Church hit hardest in these regions where unconditional respect and docility towards the clergy was very much the rule. It is in Holland and Belgium that the wreckers of traditional doctrine hit hardest. The “New Catechism” came into being there. Numbers of progressive cardinals and bishops preached heterodox doctrine. Humanae Vitae was rejected all but officially.

As a little girl on vacation at my aunts’ homes in the Netherlands, back from Latin America in the 1970s, I clearly remember my older cousins coming back from Church activities and explaining the priest had told them that cohabiting was okay. Going to Church every Sunday was more a question of personal choice. “Things aren’t the way they used to be” was the phrase that kept returning. It was an easy path to follow and most youngsters just did as they were told. Secularization set in, but it surely wasn’t the primary cause of the Church’s collapse: it was a consequence. And it was busily helped along by many modernist theologians who undermined the Church’s teachings in the Catholic universities in Belgium and the Netherlands before it was unleashed elsewhere.

Cardinal Danneels now acts as if none of this ever happened. If there is one thing that can help to keep Africa off that path, he should know better than most what to do: to speak clearly and firmly, in the very words of Christ.

On the contrary, Danneels presents the situation as a sort of blessing in disguise. He wraps it all up in spiritual vocabulary: “I have always acknowledged that perhaps God drove us towards a sort of new ‘Babylonian exile’ in order to teach us to be more humble and realize that the Church can only live and grow with the strength of Christ’s Grace. So I would always advise everyone to steer clear of all forms of triumphalism and claims to self-sufficiency. Whoever thinks they are standing, should watch out they do not fall.”

Now preaching personal humility is one thing, and certainly a very good one. But by applying this sort of language to the Church itself, which is Christ’s Spouse and our Mother, Danneels can invoke the Protestant meaning of the saying, Ecclesia semper reformanda (the Church is always in need of reform): “The Church is an instrument in the hands of Christ. So, in a sense, as an instrument, the whole Church is secondary and can be changed and reformed to make it function better. Hence, the need to make changes and reforms is part of the very nature of the Church.”

A Church that constantly adapts to the world appears to be Danneels’ idea of the “way forward”: he calls for “simplification,” “organic processes” which Pope Francis is helping along. “Pope Francis also says time and time again that processes require time instead of thinking that problems can be resolved by occupying positions of power,” he notes.

Not surprisingly, Danneels is enthusiastic about the Synod: “It has a theological value. It is not about reducing the Pope’s influence or that of other bishops, to the detriment of the other. Thankfully, the Synod is starting to be a place of real discussion, where free and responsible discussions were able to take place, respecting the Pope’s prerogatives.”

Those “discussions” were precisely aimed at putting up for debate points that the Church has definitively judged. That is what Danneels is so happy about. He also explained to Vatican Insider how satisfied he was about the new Archbishop of Mechelen-Brussels, Jozef De Kesel, a personal protégé: “He has a vision of the Church: a Church for the world that is totally immersed in culture.”

Danneels does say that the “only criterion” for genuine Church reform “has to be the salvation of souls.” But if that were truly the question at the front of the “reformers” minds, we would probably have heard more about sins, penance, pardon and redemption at the Synod.